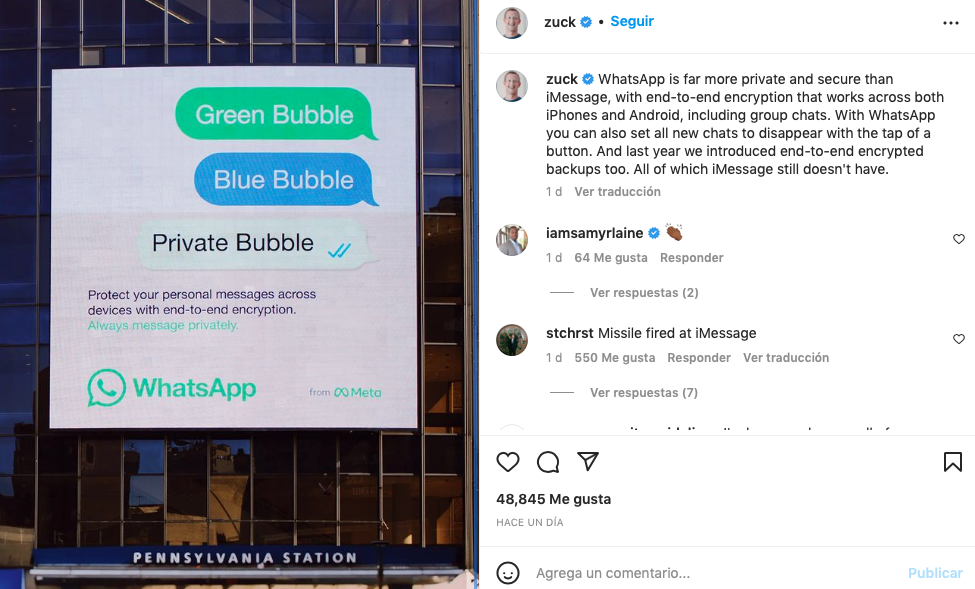 Digital platforms have become the best communication tool for people, which is why a large number of these networks have emerged in recent years. An example is the instant messaging platforms, where WhatsApp is the big winner with millions of users, that is why Mark Zuckerberg once again showed his rivalry with Apple by launching an advertising campaign that criticizes the lack of privacy of messages on their phones in iMessage.

Instant messaging is a type of online chat that offers real-time text transmission over the Internet. Since the advent of smartphones and the subsequent explosion of mobile apps, free or low-cost chat and social messaging apps have proven be a cost-effective alternative to carrier-based text messaging via SMS.

Given this, instant messaging platforms They have positioned themselves throughout the world, where Facebook Messenger is the second most used in the world. According to data from a study of data report record 1.3 billion users.

Mark Zuckerberg and his advertising campaign against iMessage

Without a doubt, WhatsApp is the leading application for instant messaging platforms, which is why it is working on new features every day to improve the experience of its users.

Given this and to further show its power in this market, WhatsApp’s parent company, Meta, voted for a new advertisement to share its rivalry with Apple, by launching a campaign that criticizes the lack of privacy of messages on their phones in iMessage, which supposedly does not happen in WhatsApp.

Meta CEO Mark Zuckerberg posted on Instagram an image of an advertisement found at New York’s Penn Station suggesting that Meta’s WhatsApp is more secure and private than Apple’s 140 million-view messaging system. users around the world.

“WhatsApp is much more private and secure than iMessage, with end-to-end encryption that works on both iPhone and Android, including group chats,” said Meta CEO.

He also explained that in WhatsApp you can also configure all new chats to disappear with the touch of a button. Giving the example that end-to-end encrypted backups were also introduced last year. “All of which iMessage doesn’t have yet,” he added in his post.

The new advertising campaign consists of an image of a message, in which this conversation is seen:

– “Green dialog balloon” (referring to messages sent from an Android).

Let us remember that Meta has considered Apple as a competitor for years, even before the parent company of Facebook will start to dabble in computing hardware like its virtual reality headsets.

In conclusion, the technological world is one of the main ones that compete to win over users globally. Given this, it is normal for them to update their interfaces and functions.

You can now hide WhatsApp “online” from specific contacts

WhatsApp will say goodbye to the profile picture; these will be the changes