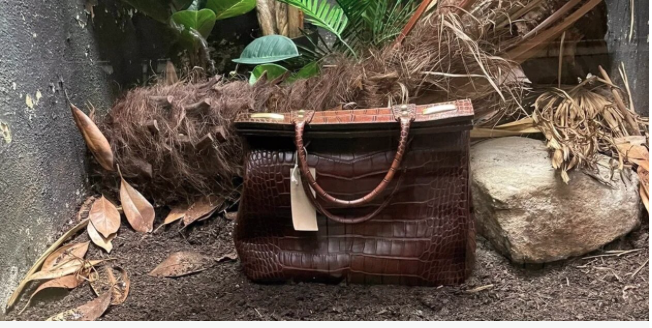 The ways in which many brands, companies, organizations and people are exposing all the problems that exist in the world have changed and with the arrival of social networks, awareness is easier. Recently, The London Zoo has carried out a peculiar action to draw attention and raise awareness about the threat of hunting animals, so in the enclosure for the Siamese crocodile they exhibited a bag made with their skin.

In the past, the use of fur was very common in some products in the fashion industry, but in this era, many brands in the sector have become more conscious and sustainable. In part, due to the action of groups of activists against animal suffering.

In this sense, it is estimated that each year more than 80 million animals of different species are captured, separated from their habitat and slaughtered to make different types of clothing. Likewise, Some 40 million animals are raised on fur farms to supply the fashion industry, mostly mink, foxes, raccoons and chinchillas, but also coyotes and bobcats.

A joint study by the universities of California and Emory in Atlanta, United States, revealed that, despite the fact that the claims of the activists against the use of animal skins put the claim on the table, Not until the specialized fashion media, led by Vogue magazine, began to raise questions about the morality of their use, did manufacturers take them seriously.

It is worth remembering that the movement against the use of animal skins has a long history, and already in 1994 he got Calvin Klein to stop using this material in his designs.

For its part, People for the Ethical Treatment of Animals (PETA), an organization that works to end the abusive treatment of animals, recently stated that each year more than one billion animals are killed for their skins or hides worldwide.

The London Zoo has carried out a peculiar action to draw attention and raise awareness about the threat faced by different species of animals, so in the enclosure for the Siamese crocodile they placed a bag made with their skin.

Next to the bag there is a message that says “This bag used to be found swimming in slow-flowing rivers and streams throughout Southeast Asia and Indonesia. In the last 75 years, more than eighty percent of the Siamese crocodiles have disappeared. Many of them, like this one, were hunted for their fur as part of the illegal wildlife trade.”

London zoo not pissing around pic.twitter.com/C9cxoDCba2

The impact of the image was so great that it has gone viral on the social network Twitter, registering more than 370,000 likes and more than 60,000 retweets.

According to information shared by the BBC, the campaign is part of a wake-up call for the problem of animal hunting, for which the bag was seized by UK border officials at a London airport in 2018 and was given to the zoo in order to highlight the impact that the illegal wildlife trade is having around the world.

Among these species are the Siamese crocodiles, which are native to some areas of Southeast Asia, and are in danger of extinction, so it is estimated that there are only between five hundred and a thousand of these crocodiles left in the world due to the loss habitat and hunting.

The use of strategies marketing and marketing have worked for many organizations to raise awareness about various problems that can affect the world.

Supermarket is criticized for protecting makeup for dark-skinned customers