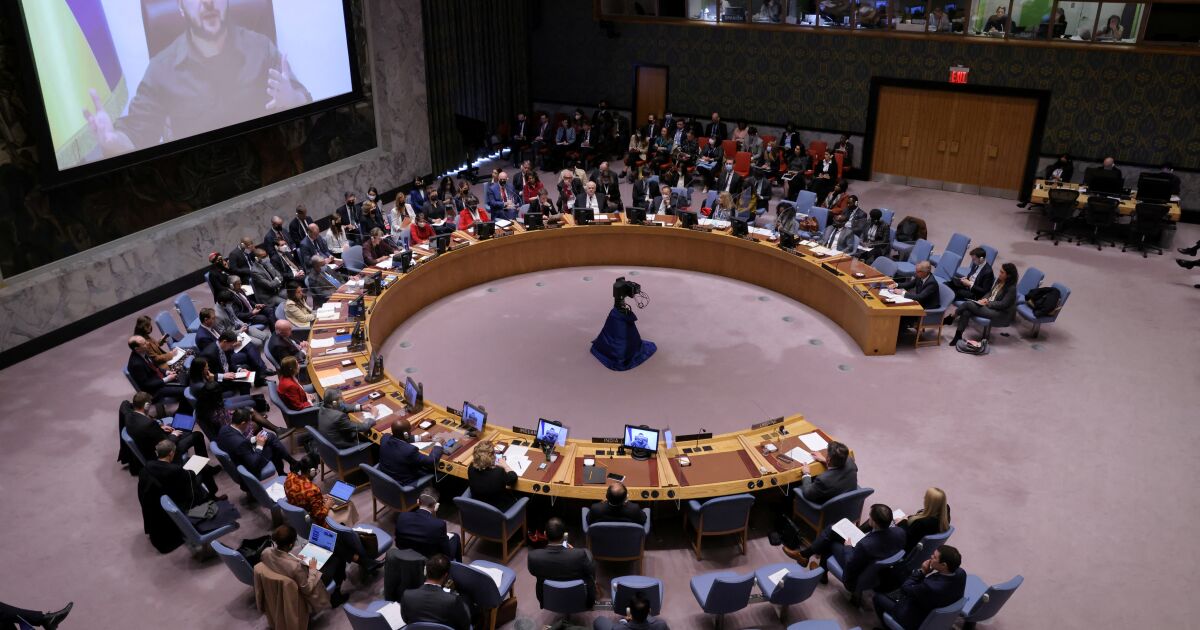 At the same session, Russia, a permanent member of the Security Council, vetoed a resolution accusing its military of committing atrocities during its invasion of Ukraine.

“Now we need Security Council decisions for peace in Ukraine. If they don’t know how to make this decision, they can do two things,” the Ukrainian president said.

Ukraine’s president, Volodymyr Zelensky, has made a series of appearances in major Western parliaments. On Wednesday he spoke before US congressmen.

Despite the apparent weakness of his government, Volodymyr Zelensky has proven to be the leader that Ukraine needed to face the Russian invasion.

Since the beginning of the invasion, the president has become a global icon of the Ukrainian resistance, which uploads scenes of combat and resistance to networks every day.

Dressed in army clothing, unshaven and with bags under his eyes, Zelensky has turned to the networks to ask his population to join the armed forces and defend the national territory.

Zelensky’s courageous stand has made it much more difficult for the rest of the world’s leaders to sit idly by.

Instead of leaving kyiv, he has made the war zone the seat of his government, thereby boosting the morale of his soldiers and the recruitment of civilians.

“Exclude Russia as the aggressor and the one who started the war so that it does not block decisions related to its own aggression. And then do everything possible to achieve peace,” Zelensky said in the presence of UN Secretary General Antonio Guterres.

“Either the other option is to please show that we can reform or change (…) If there is no alternative and option, the next option would be to dissolve completely,” the Ukrainian president demanded.

Thus, he proposed a reform of the Council that avoids this type of situation and that provides the body with a “fair representation of all the regions of the world”, with a true capacity to stop wars.

Zelenski also proposed the convening of a “global conference” to decide how to reform the world security system, how to establish guarantees for the recognition of borders and how to enforce international law.

“We have to do everything possible to leave to the next generation an effective UN, with the capacity to respond preventively to security problems, prevent aggression and force aggressors to peace,” he insisted.

In his speech to the Security Council, Zelensky denounced the alleged atrocities committed by Russian forces in Ukraine, after having visited the town of Bucha, the scene of an alleged massacre of civilians.