Bullfrag
Home Technology You remember? Cell phones that were considered top in Mexico in... 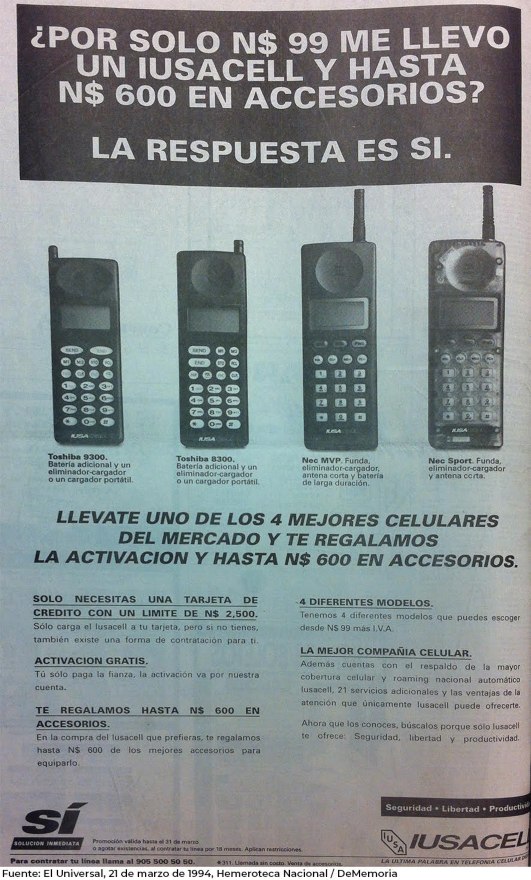 Facebook
Twitter
Pinterest
WhatsApp
Based on the fact that Apple revolutionized the technology market when it introduced the iPhone and imposed the smartphone model as we know it, it is curious to look back and remember what the cell phone before touch interfaces and telephones became our personal assistants.

But we are not talking about the first half of the two thousand when Sony Ericsson, Nokia, LG and Motorola launched equipment that incorporated functions that were beyond what we used to understand on a cell phone, but a decade ago, when the idea of ​​taking photos and reproducing Music on the phone seemed like concepts out of the most speculative science fiction.

That memory came to mind when we saw this image shared by our friends from DeMemory:

As you can see, it is a promotional image of Iusacell that was published in the newspaper El Universal on March 21, 1994.

It focuses on four phones that were listed as “One of the best cell phones on the market” and they were Toshiba 9300, Toshiba 8300, Nec MVP and NEC Sport.

Of the first two, it was highlighted that they had extra battery and a Portable Charger, and of the last two, one stood out sheath Y short antenna.

They are models for which there is little available information, however we were able to verify that Toshiba was promoting the 9300 model, noting that a Full load required the phone to be connected to power eight to 10 hours, under the understanding that a 100% high capacity battery would perform for a 100 minute call, while the standard battery supported 60 minutes on call, amounts that at this time are simply unthinkable.

The price is also striking, since the promotion was that any of these teams could be obtained for a payment of 99 new pesos, a figure that, adjusted for inflation, is currently equivalent to 782 pesos.

Apple gives us contradictory messages: can or cannot the iPhone be carried on the motorcycle? | Technology