Bullfrag
Home Technology Xiaomi close to taking the crown away from Samsung in the smartphone... 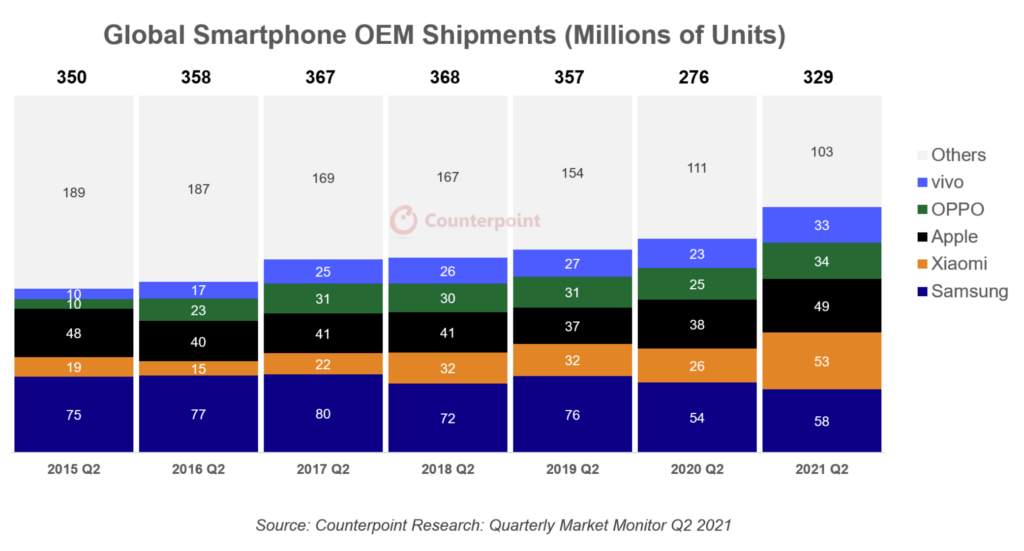 Facebook
Twitter
Pinterest
WhatsApp
Although in the second quarter of 2020 Huawei surpassed Samsung in sales due to the COVID-19 pandemic, the taste was short-lived, and the South Korean firm regained the throne that it has held since 2011. However, since 2019 it has not been He saw such a serious threat to Samsung’s leadership as Xiaomi carries in 2021.

According to figures from Counterpoint Research, Xiaomi established itself as the world’s number 2 manufacturer in sales of smartphones after eShip 53 million units in the second quarter of the year (April – June).

Samsung remained in the first position with 58 million shipments. However, Xiaomi’s accelerated growth is striking, as it registered a year-on-year increase of almost 100%. In the same period of the previous year, the firm had only shipped 26 million phones worldwide.

In the third position is Apple, with a total of 49 million units shipped. The fourth and fifth positions were also for Chinese companies such as OPPO and Vivo, so BBK Electronics is really the company that sells the most phones in the world, since only 2 of its brands distributed a total of 67 million phones, 9 million more than Samsung.

Counterpoint Research mentions that the total units shipped in the second quarter of the year was 329 million.

Although Apple constantly moves from second to third place in the sale of smartphones, a title that it has also held for years (and that is difficult to lose) is that of profits from the sale of phones.

According to figures from the market analysis firm, Apple has 41% of sales profits, and it is far from the percentage of profits that Samsung has, which is the second most income brand from the sale of phones.

READ:  Facebook games, a disaster on iPhone and iPad

While the South Korean manufacturer kept 15% of the profits during the second quarter of the year, Xiaomi only obtained 9% of them. However, analysts point out that only Apple and Xiaomi had year-on-year growth in this area.

The reason why Xiaomi registered growth from one year to the next is due to the high percentage of sales in the same period, as one of the reasons why Xiaomi sells so many phones is due to its aggressive prices in the market.

On the other hand, Apple only sells premium phones, which are the ones that generate the most profits for manufacturers.