Valve announces a big change for Steam deals in 2023 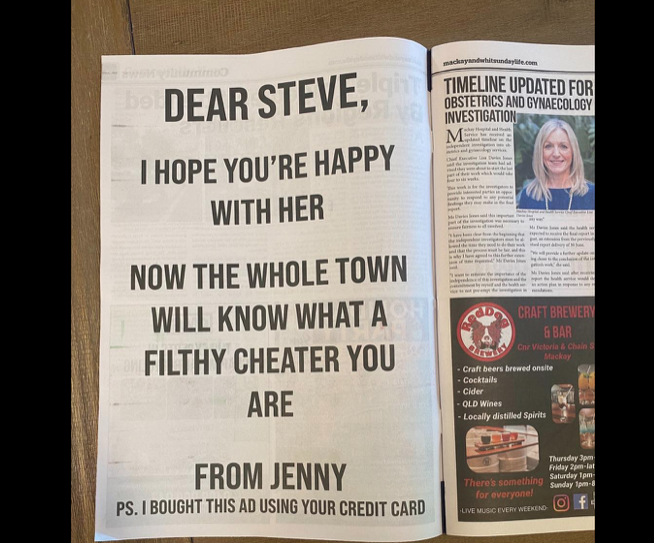 In the streets, on the phone, on television or even in the bathroom, you can find advertising. It recently emerged that one woman took out a full-page ad in her local newspaper, publicly humiliating her husband for being a “dirty cheater.”

Ads have invaded our lives and it is not something new. In an increasingly digitized world dominated by social networks and the internet, advertisements in newspapers or magazines are still used.

In this sense, the study specifies that including advertising in newspapers increases the ROI of a campaign in the finance sector by 5.7 times; three times for travel, 2.8 times for retail sales and 1.7 times for automotive.

Humiliates her husband with a newspaper ad

The story of a disappointed wife has gone viral after she took out a full page ad in her local newspaper, publicly humiliating her husband for being a “dirty cheater”.

The woman, identified only as Jenny, expressed her anger on August 2 in an edition of the Australian newspaper Mackay and Whitsunday Life.

“Dear Steve, I hope you are happy with her”…

“Now the whole town will know how disgusting and cheating you are. From Jenny. P.S. I bought this ad with your credit card,” read the ad, which was posted in large, capitalized print.

The newspaper is read by more than 50,000 people in the tropical tourist region, located next to the Great Barrier Reef, so it was inundated with calls from nosy locals who wanted more information about the scandal in the small town.

The interest was so intense that the editors of the newspaper had to go to their account on the social network Facebook to inform the public that they would not reveal any more details about Jenny, the woman who took out the ad.

In that sense, they revealed that he booked the ad through his online portal, but did not reveal how much he tried to pay for the trick with his spouse’s credit card.

The publishers eventually decided to run the ad for free, saying it was illegal to bill Steve’s account without his consent. To that they also added: “We do NOT know who Steve is, but apparently he has been very, very bad.”

On the other hand, in her Facebook post, dozens of readers praised Jenny for humiliating her cheating husband, where one woman wrote: “Oh I wish I had done that when my husband left me for another woman.”

However, some netizens think the ad could have been fabricated by employees of Mackay and Whitsunday Life.

“Great way to get more likes and readers for your page.”

“The goal of a newspaper is the public interest, right? Well, the public has spoken…”, they affirmed.

As well as this case, there are also others where people use advertising to benefit their lives. As an example the glass of a man in India, who bought space on a billboard in the subway, to promote himself and get his ideal woman to marry.

In this sense, there are hundreds, thousands of advertisements present in our lives, whether in print, appearing on television or in the form of banner When we browse the Internet, the truth is that there are many types of advertisements with which brands, large and small, try to offer us their products and services.

How good is it to have your bosses on social media?

Will smartphones do away with cameras?

Valve announces a big change for Steam deals in 2023

get free and super easy 10 packs valued at 200,000 coins for the Ultimate Team