With viral video, son rescues his father’s restaurant from bankruptcy 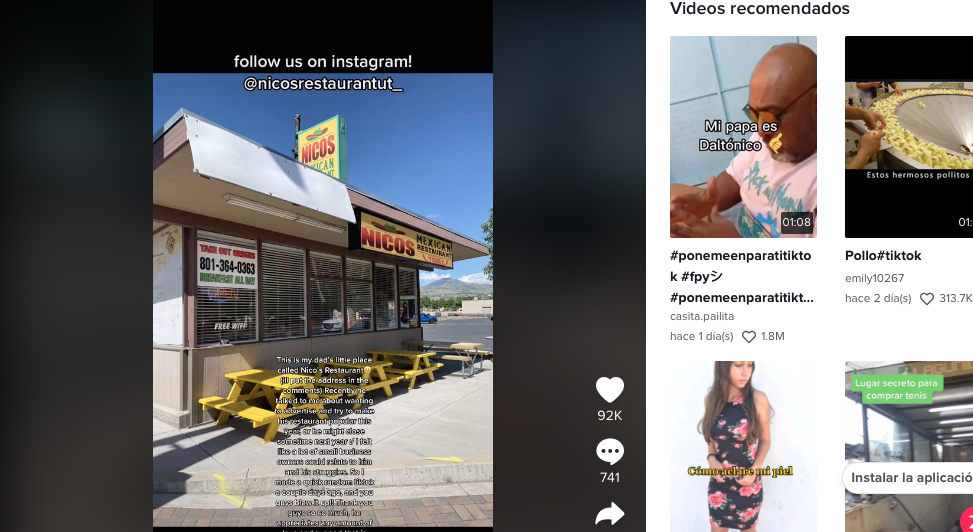 The internet and social networks are currently the most widely used means of communication around the world, which is why everything that arises in these digital spaces and becomes viral can have very good results as well as bad ones. It is the story of a small restaurant that was on the verge of bankruptcy, but only a viral video was enough for the business to resurface in sales.

It is no secret to anyone that TikTok is one of the social networks of the moment, for which it has 655.9 million users, according to your annual report. Likewise, in 2021 it was positioned among the top 10 networks in the ranking with the highest number of active monthly users worldwide.

In that same order, according to data from Hubspot, the leading platform for expanding companies, it is TikTok and it is gradually beginning to reach other generations. Where 47 percent of users are between 10 and 29 years old, 21.7 percent between 30 and 39 years old and 31.3 percent are over 40 years old.

In this sense, according to the Federal Telecommunications Institute, TikTok is one of the most used platforms in Mexico. In the country, it already has more than 50 million users over the age of 18 as of April 2022, according to data from Kepios & ByteDance.

Son helps his father with viral video on TikTok

The story arose when the owner of a small restaurant did not see the future of his business at all, but his son’s TikTok changed it, demonstrating the power of social networks.

Nico Cárdenas has run a small local specialized in Mexican food in Salt Lake City, Utah, for 10 years, but due to the Covid-19 pandemic and the other problems that affect the world economically, the business was about to go bankrupt.

However, Carlos, his son, noticed this and asked his father to try social networks, so Nico allowed himself to be recorded to upload a video on the platform.

In the short video you can see how he prepares to start a new day. “My dad is very excited to open the restaurant…”, the video reads. And immediately there is a contrasting image, in black and white, where the man appears sitting and head down at one of the tables, with the place empty; “… But no one comes,” he concludes.

“My dad looks very stressed, if you live in Utah, don’t hesitate to stop by his restaurant sometime,” was the message with which Carlos accompanied his video on the TikTok platform, where he has 53 thousand followers.

Before the publication, the recording, which is nine seconds long, accumulated more than six million views and reactions. But the support was not only given in the digital world, as customers soon packed the restaurant.

@clumzycarlos My dad was blown away with the amount of support he got from TikTok! If you guys want to support and continue watching this journey of my dad’s restaurant, I made him a TikTok account where we will post a lot of his food from him and anything else related to his restaurant! His TikTok of him is @nicosrestaurant ♬ She Share Story (for Vlog) – 山口夕依

“My family and I are so grateful for all the love and support everyone has given us these past two weeks, I can’t explain how amazing this is,” Carlos said.

As he also explained that his father was worried, because if the business continued to be weak, he would have to close next year. Carlos asked him for an opportunity to start promoting himself on social networks, although he was skeptical.

“My father was amazed at the amount of support he received!” Said the young man, who pointed out that he would continue to spread videos about the activity of the business, which now has its own account on Instagram, Facebook and of course TikTok.

It is not the first time that a store, brand or product has gone viral on social networks, increasing its sales, as happened with a lip by Cristian Dior that became a trend on said platform and its sales increased.

These types of stories are the true proof that social networks are a good medium when they are well used and that thanks to their reach they can reach all parts of the world.

Meta and TikTok can track everything you type, research shows

Nursing home residents succeed on TikTok with their creative content