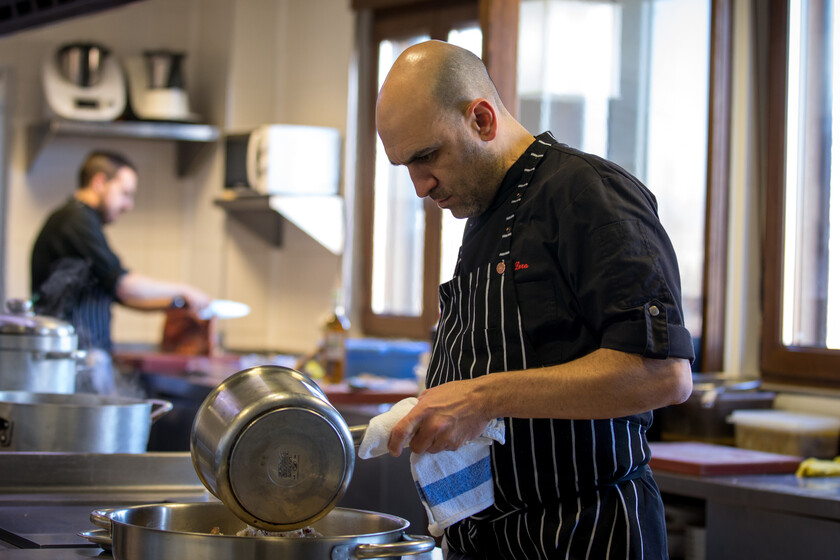 Few voices are more authoritative in Spanish gastronomy to talk about hunting, Empty Spain and defense of the territory than that of Luis Alberto Lera who from the Lera restaurant (Castroverde de Campos, Zamora) talks about hunting, countryside and sustainability. Her message, of course, has never been high-flown but now, with the Michelin loudspeaker through, it resonates louder than ever.

Faithful to his Castilian origin, Luis Alberto knows that the changes, almost as if it were the Zamora countryside, are barely perceptible from one day to the next. A lifestyle that he himself has been polishing, even through his cooking, which in a perpetual evolution he has seen as in 2021 Michelin put him, after incomprehensible years of oblivion, in the guide with his first star.

It was never something that bothered Luis Alberto, although he acknowledges the accolade it entails and assures that “the type of cuisine we do is not going to change”. This it means hunting, it means legumes and it means territory above all things.

It also means being a champion, even by force, of various causes that are not in fashion. Surely, thorny issues through, hunting is the one that raises the most controversies and on which part of his presentation in the past Madrid Fusión dealt. Even with the echoes of the auditorium, Lera’s words were clear: “the wild game is going to disappear”.

Lera has been showing off its hunting use since its origins.

Little can be branded Luis Alberto as a doomsayer, even more so when he is one of the chefs who are most at the foot of the canyon in the field and in the kitchen, so his message did not fall on deaf ears. Especially when just a week before, Madrid was filled with farmers, ranchers and hunters to claim rural Spain.

Against prejudice, Lera’s chef does champion causes that especially bother him, he tells us in an encore behind the scenes. “It bothers me that hunting is politicized, put on a political side of this country and that we live in extremes“, he assures.

It is not the only thing that bothers him, especially when ignorance abounds. “It also bothers me that hunting is not well understood. It is true that we already hunt for subsistence, but it is a form of food and that can be used to feed many people“, indicates.

Also, charge against generalizations. “I always set the same example. It’s like soccer; there are those who are going to shoot flares and there are those who have been going for sixty years and go with their grandchildren. The same thing happens with hunters. It’s an effort, a sport, it’s getting to look for the piece and taking advantage of it. At Lera we serve everything we hunt”, he claims.

“We cannot stigmatize each other because we all have to enter this world,” he clarifies, but he has things clear: “hunting in the 21st century must be sustainable, profitable for the people and, above all, not politicized“.

This sustainability opens the ban, almost literally, for agriculture to have a greater awareness of the use of heavy machinery of enormous dimensions, as well as the use of pesticides and herbicides that devastate the countryside.

The rural as a whole

In addition to being a cook, Luis Alberto Lera is a hunter and the game he collects, he always takes advantage of.

Along with this, a peaceful coexistence that allows everyone can find their place in the rural, be a farmer, rancher or hunter. “Things could be done better if we reach agreements between hunters, preserves and farmers because we all live in the same framework,” he illustrates.

She refers to that mantra of “at worst, wild game will disappear” and it is precisely the work in the field that devastates her the most. “I cannot tell a farmer who passes the machine what he has to do, but it is true that I miss a little more sensitivity to do things a little better and that there is still hunting”, he considers.

“I find two kilos of caviar more easily than a hare.”

It refers, mainly, to small game. “With the largest the problem is its overabundance, but the smallest, especially the hares, is a problem. Years ago we thought that the partridges would run out before the hare and look now, I only have four hares and I am going to use them in Alimentaria to explain the problem with them“, he assured.

“Small game pieces such as lebratos have no outlet in that machinery, but, as I said, you can’t ask someone who is looking for their livelihood to do things in a certain way or another”, he regrets. To this is added, he adds, “the enormous problem we now have with myxomatosis in the hare”.

“The other day I did an analysis of a hunter who hunts hares with me all his life and we thought that they would never end. The reality is that now I find two kilos of caviar more easily than a hare“, be honest.

Remove the romanticism to the Emptied Spain

The politicization of hunting is not exempt from a message that, moreover, is frequently transferred from offices and legislation. The romanticism of the countryside and rural life collides with laws that they show little or no knowledge of a reality foreign to the big cities.

“The theme of the emptied Spain is real, but I don’t like labels. Rural cuisine is a trend like others were, but what I believe is to take advantage of this trend and be more every day. Let’s think about km0, about local cuisine, about factors that serve the rural world and why we are here,” he adds.

Read:  the most tender Swedish buns, typical of Carnival and Lent

Lera’s legendary fame comes from her use of legumes and, especially, of hunting, such as her dovecote pigeons.

Faced with this profile, Luis Alberto also speaks clearly about the way to regulate from ignorance. “The Animal Welfare bill is a project made in an office far from rural life and with an absolute ignorance of what there is or is not, but putting everyone in the same bag. Needing thirty mastiffs to take care of a flock is not the same as having a Yorkshire in a flat“, he pleads calmly.

Nor is he convinced by the bureaucracy that slows down the use of game meat. Currently, a hunter needs to carry out various health checks on the hunted pieces in order to be able to market them. A slow and costly process that, being necessary, slows down the procedure. “It will be our next workhorse. We have to make it possible for the people in our area who have small game to sell it and legalize it in quick procedures, without having to get a dead animal transporter card,” he adds.

Luis Alberto Lera, in addition to winning his first Michelin star, also got the green star, which rewards the most sustainable restaurants.

Few applause were more resounding than the one received by Luis Alberto when his name was pronounced at the last Michelin delivery gala. In the perpetual pool of candidates, year after year the guide seemed to have no Castroverde de Campos on the map.

The price of a success that, however, as he is most grateful for, is “with the support and affection of the profession, which is what I brought the most from Valencia”, of which he confesses “feeling lucky”.

Now, Luis Alberto continues to be grateful, both for his work and for the one he does with his mother, Minica Collantes, with whom you share a stove, or with Natalie Fernandez, his wife and who also helps in the management of the restaurant and the attached small hotel.

It goes without saying that, perhaps, some of Lera’s regular and long-time diners are not particularly amused by the star because it makes it difficult to find a table. “We now have a crazy rhythm, but eating at Lera is not impossible and you have to look for the right moment“, explains Luis Alberto.

Lera has a hotel with nine rooms, in addition to the restaurant in Castroverde de Campos.

“We have a person in charge of reservations so that people can go to Lera, although it is true that now, for example, we have closed weekends for a very long time,” he specifies. “For example, in the hotel, where we have nine rooms, it has outgrown us and it is already complete six months from now“, he comments without pabulum and commenting that No less than 18 workers depend on Lera and her hotel.

Perhaps it is not an overwhelming number, but if we contextualize it in Castroverde de Campos, the accounts come out. “I wish I lived in a more populated area, and in my town there were a thousand and something inhabitants, which was the ones that existed not so long ago. The other day I went to vote, I asked at the table and there were 246 registered, “she adds.

Luis Alberto Lera during the presentation ‘Cooking as a priority’ at Madrid Fusión 2022.

“You can come to Lera on a Monday, a Tuesday or a Sunday, It’s a wonderful day to come spend the night with us or in Villalpando or Bolaños [dos pueblos cercanos]”, he recommends. Along with this, putting an end to taboos that pretend to imagine Castroverde or Castilla as a frame of The Holy Innocents or from a mass area, gentlemen and caciques.

“It’s just a cliché. We are normal people; we have the internet, we have six megabytes, which is not many, but it reaches us. We are people who go to concerts, to the theater, to the cinema, to museums… Nothing is impossible, especially because in the end these stigmas of the villager are false and because there may be more prepared people than there may be in the city“, he thinks.

Break the myth of dry Castilla

It is easy to think of Castroverde as a scene from Fields of Castile of Machado or place it in the imaginary of The hunter of Delibes, but Castilian-Leonese cuisine it does not have to be exclusively a rainfed recipe book, of cereal and austerity.

“Culturally we are a rainfed kitchen for survival, especially in Tierra de Campos [la comarca a la que pertenece Castroverde], but in Castilla there is also a very green cuisine like that of Tudela de Duero. And also if we talk about legumes that were eaten green”, he explains.

“In my town the titos are taken [garbanzos] green and you have to be clear that Castilian cuisine is not boring, but it does cost a little more than in an irrigated area”, he lists. “You can make a summer and spring kitchen, greener and less austere, with the means we currently have”, he adds.

a party recipe, but cheap, that you can make all year round

Why putting beer in the freezer is a bad idea, even though it sounds tempting

The best (and worst) vegetable burgers in the supermarket, according to the OCU

healthier cooking for up to six people