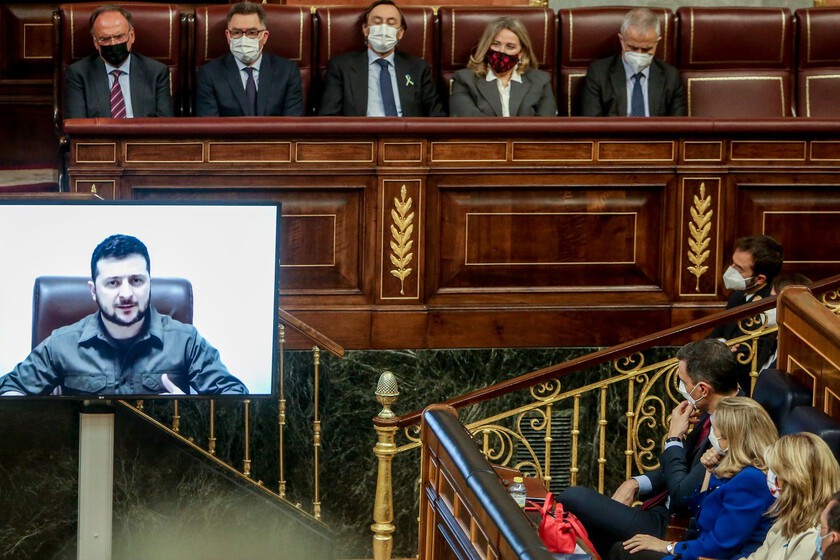 Ukrainian President Volodimir Zelenski delivered an emotional speech yesterday afternoon in front of the Congress of Deputies. In his intervention, the Ukrainian did not miss his gratitude to the many Spanish companies that have withdrawn their activity and severed their ties with Russia after the invasion. But he has also wanted to point out others that still maintain ties with Russia despite international sanctions. Specifically, he cited one of the most prestigious Spanish ceramic brands, Porcelanosa, and the group of explosives and chemicals for mining Maxam.

And of course, those claims have caused quite a stir, with companies pointing fingers at each other and defending themselves against the accusations.

Speech. “I want to address the companies, for example, Maxam, Porcelanosa and other companies that I request and ask to stop doing business with Russia”: these were exactly the words of Zelenski during his speech before the Spanish parliament, in which he also recalled the atrocities and abuses committed by Russian troops. In his list I also include a third, Sercobe, although in this case it is not a company but the National Association of Capital Goods Manufacturers that has an office in the country of Vladimir Putin.

Porcelanosa denies it. The Villareal-based group has been quick to defend itself and deny the accusations. “Since the conflict began, no new sales procedure has been initiated, blocking all commercial transactions with Russia,” they explained within hours on their Twitter account. In addition, they stressed that Porcelanosa has carried out actions aimed at helping the Ukrainian people, in defense of their human rights. And that have made humanitarian aid shipmentswhich included medical supplies, clothing and food.

Porcelanosa has elaborated on various data: “Since the conflict began, on February 24, Porcelanosa made the decision to paralyze any economic activity in Russia, where there is no distribution network of its own, as is the case in Spain, the USA, Italy or France, among others. The only commercial action that has taken place there responds to the minimum of the contracts established with multi-brand distributors before the war. The Russian market in March represented only 0.009% of the company’s sales, which only computed at 197,000 euros”.

1/3 From PORCELANOSA, we want to state that since the conflict began, no new sales process has been started, blocking ALL commercial transactions with Russia.

Misunderstood? Although it is true that the Porcelanosa ceramic group has several stores in Russia, they could be independent stores. In 2018, it expanded two large exhibition venues, as stated on its website and in company notes from the firm itself. The following year he opened another store in Siberia due to the good progress of his business in Russia. According to the Institute of Foreign Trade (ICEX), the Spanish ceramic sector had a turnover of 60 million euros in 2020.

Read:  Aryna Sabalenka gets a place in the round of 16 at the expense of tennis player Danielle Collins

Regarding these stores and the announcement on January 17 of the opening of a new store in the Russian city of Krasnoyarsk for this 2022, Porcelanosa has assured that they are independent customer establishments, and do not belong to group stores. “They are stores of independent companies, our clients, who buy products from us and sell them. But emphatically: we do not have any investment or any store in Russia.” And they describe Zelenski’s intervention as a “misunderstanding” resulting from “erroneous information.”

Max is silent.. Meanwhile, another of the companies mentioned, Maxam, an industrial group dedicated to the manufacture and sale of explosives, remains silent and keeps its website down more than 12 hours after Zelenski cited it. In other words, he has not denied the Ukrainian president’s assertions nor has he spoken.

It is a global company specialized in the design, development, manufacture and application of energetic materials. The group has subsidiaries in 50 countries, Moscow and Siberia among others. It has more than 6,000 employees, according to its annual accounts. The company invoiced more than 1,000 million euros just before the pandemic.

Sercobe also got out of the way. The National Association of Capital Goods Manufacturers (Sercobe) also responded to Zelenski’s words and has “flatly” denied that he is doing any type of business with Russian companies or organizations since international international sanctions have been put in place. by the international community. “Sercobe rigorously complies with international legality, being one of the main references before the Spanish Administration in all regulatory and normative matters,” the association remarked.

The conflict is fully affecting the ceramic sector. Not only because of the impact on the prices of the gas bill necessary to fire the tile. Russia ranks twelfth as an export destination. In 2021, it bought products worth 71.8 million euros, 20% more than in the 2020 financial year, greatly hampered by the covid. Ukraine is a smaller market, 23.6 million (+20% also last year).

There is another important problem caused by the armed conflict. Ukraine is the main exporter of white clay (kaolin) used by the Spanish tile industry. 70% of this raw material comes from the Donbas region, one of the main objectives of the military campaign launched by Vladimir Putin on the sovereign space of his neighbor.

Meet the First Draft of the Complete Monkeypox Sequence