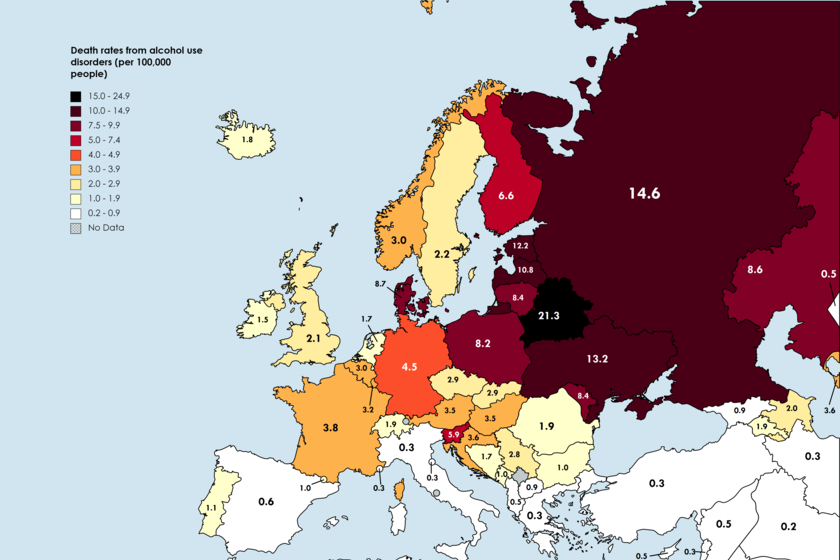 Every day around 800 people in Europe die from causes attributable to alcohol. And we still face the challenge of reducing consumption as the damage is still very high. To give you an idea: 8.4% of the EU adult population consume alcohol daily, 28.8% weekly, 22.8% monthly and 26.2% never. Although consumption is common and culturally accepted, it is a drug. And almost a third of all deaths are related to cancer.

However, mortality rates from alcohol vary from country to country. It is also curious that in Spain and Italy, where large amounts of alcohol are drunk compared to the average, there are not so many deaths. Is there an explanation?

More consumption does not mean more deaths. To delve into the matter, it should be noted that the highest percentage of people who drink alcohol on a daily basis is found in Portugal and the lowest in Lithuania. Daily alcohol intake is more frequent in Portugal, with one fifth (20.7%) of the population consuming alcohol every day, followed by Spain (13.0%) and Italy (12.1%). In contrast, the lowest proportion is around 1.0% in Latvia and Lithuania. In the Netherlands, almost half of the population (47.3%) consumed alcohol weekly, closely followed by Luxembourg (43.1%) and Belgium (40.8%).

Monthly consumption in the EU was highest in Lithuania at 31.3%, Latvia (31.1%) and Cyprus (30.4%). Among the EU Member States, Croatia had the highest proportion of the population (38.3%) that never consumed alcohol or had not consumed anything in the last 12 months.


EU Frequency of Alcohol Consumption in 2019.

Where are there high mortality rates? They are located in the east of the continent. Poland in the lead, with a sinister rate of 21.3 per 100,000 inhabitants as we see on this map. Also Russia with a 14.6, Ukraine (13.2) or Germany (8.2) are other similar examples. We can also see that the rate is quite high in Denmark, Latvia, eastern Austria, western Hungary and Scotland.

In general, it appears to be much higher in the northern half of Europe than in the southern half. Apparently in cultures where drunkenness is frowned upon and where alcohol is only consumed in the company of others and served alongside meals. Like in Spain and Italy, for example.

And if we pay attention, the countries that do it the most are to a greater extent those that also suffer a higher mortality rate.

Read:  we hunt the two pieces made in Spain of its last appearance

Episodic binge drinking at least once a month in 2019.

In the 2002 Eurobarometer survey on alcohol, Ireland, the United Kingdom and Finland had the highest number of occasions when people thought they “had had too much to drink” and had the lowest percentage of alcohol consumption with meals, with Italy the one with the highest. Historically, European countries have restricted demand with rigid controls including:

Local wine, a key. The nature of the alcohol industry in southern Europe is also different, with a wide variety of diverse wine producers and local or regional production. Wine consumption in Italy or Spain, for example, was closely related to rural lifestyles and migration from rural to urban areas led to less wine being drunk.

Similar trends occurred in France thanks to urbanization, but consumption has continued to fall through the 1990s onwards.

Changing the way we consume. The measures taken by the European Commission in the late 1970s to reduce wine production and improve product quality as part of agricultural policy alone cannot explain the drop in domestic consumption. And here generational changes come into play.

For example, how the middle classes became the pioneers of change in France, who were already drinking less than other groups, preferring to opt for high-quality options: “bottles with corks” instead of bricks cheap. This suggests that improved health can go hand in hand with a move towards quality and away from quantity.

In summary. Despite the increasing homogenization of alcohol consumption in Europe, trends in each country indicate that there are a number of different factors that impact the levels of alcohol-attributable liver mortality. In northern Europe, a combination of mainly economic and market factors has contributed to increasing levels of total consumption and its associated harms, while in southern Europe social changes have contributed to the downward trend in liver-related deaths. with alcohol.

However, consumption remains high and trends among young people mean that rapid action must be taken to achieve a reduction in liver cirrhosis. And we are on the wrong track.