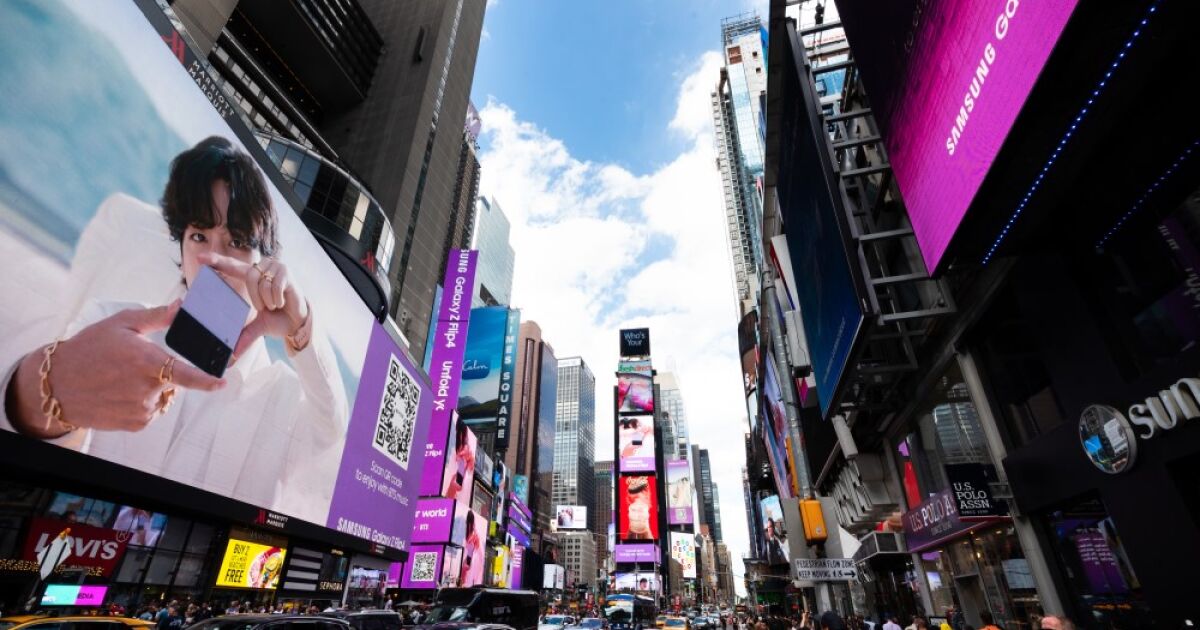 Why are BTS and Samsung collaborating?

In the context of Unpacked 2022, Samsung created a visual experience in the most iconic locations on the planet: Times Square, in New York; Piccadilly Circus, in London, COEX, in Seoul; Shibuya, in Tokyo and Kudamm in Berlin, whose giant screens projected, for thousands of passers-by, two new music videos arising from the collaboration of Samsung and BTS.

The first digital film, “Galaxy x BTS: Unfold Your World with Flip4”, highlighted the new experiences offered by the new flip to the beat of BTS’ single “Yet To Come (The Most Beautiful Moment)”, celebrating the new color Bora Purple released by Samsung.

BTS takes over Times Square to present their new Yet to Come video, in conjunction with @samsungmobilemx pic.twitter.com/mwluQAtmDm

BTS debuted in 2013 in South Korea and gradually grew its audience around the world. They have become one of the most profitable boy bands in history, valued at $4 billion, according to public information from Hybe, the agency to which the group belongs.

The group’s alliance with Samsung began a couple of years ago, when they announced a special edition of the Galaxy S20.

In June of this year, BTS announced that it would take a short hiatus, which led to a 28% drop in Hybe’s shares, or about $1.7 billion.

Group leader RM and his bandmates said at a group dinner on Tuesday that the group needed a break. “The problem with K-pop and the whole idol system is that they don’t give you time to mature,” RM said in a video posted on YouTube.

Read:  China confines its population due to a new outbreak of Covid-19 infections

The group has released many hit songs, including “Dynamite” and “Butter”, since their debut. They were the first K-Pop group to top Billboard’s album charts in 2018 and the first Asian band named “Artist of the Year” at last year’s American Music Awards.

They have also managed to visit leaders such as Joe Biden, with whom they spoke about the urgency of having issues such as global warming on the global agenda.

Regarding the relationship that Samsung has with this band is the support that the Korean government has given to K-Pop. According to NPR the value that the BTS band has added is 5,000 million dollars, so the growth it has translates into more jobs and growth for the country, something that Samsung is also interested in.

For its part, Samsung has invested just over 9,300 million dollars in research and development, which represents 7.8% of its income, so promoting its new folding phones, hand in hand with this K-Pop band, can help you. to sell the 13 million smartphones it hopes to ship this year alone.