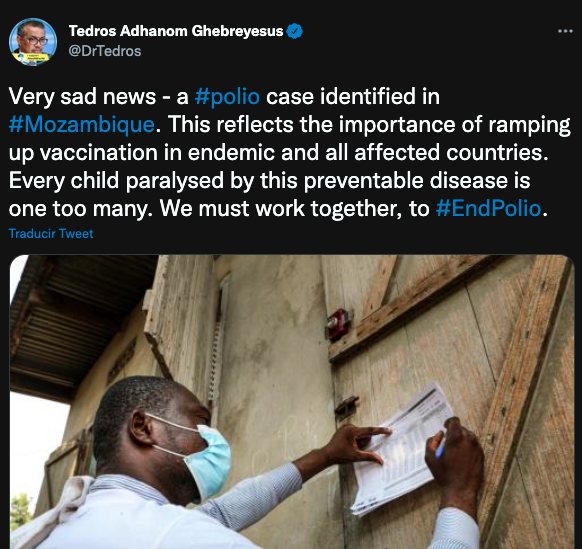 The warning signs have been turned on again and this time it is not due to the Covid-19 pandemic. Now it is about the reappearance of a disease that seemed eradicated thanks to international immunization campaigns. It’s about a new polio outbreak which has been declared by the World Health Organization (WHO). At the moment there is only one confirmed case but it is not ruled out that there are more.

The Mozambican health authorities today declared an outbreak of wild poliovirus type 1 after confirming that a child in Tete province, in the northeast of the country, had contracted the disease.

So far, only one case has been detected in Mozambique, although it is the first to occur in the country since 1992. The virus was found in a child who began experiencing paralysis in late March. Genomic sequencing analysis indicates that the newly confirmed case is related to a strain that had been circulating in Pakistan in 2019.

Very sad news – a #polio case identified in #Mozambique. This reflects the importance of ramping up vaccination in endemic and all affected countries. Every child paralyzed by this preventable disease is one too many. We must work together, to #EndPolio.https://t.co/zhPFnuMAl0

For its part, this new outbreak of polio is already the second to be declared during this 2022. Only in February was a health emergency declared due to the detection of a case in Malawi. At that time, the first case of wild poliovirus in Africa in more than five years was confirmed.

In this regard, the WHO points out that the cases of Mozambique and Malawi do not affect Africa’s wild poliovirus-free certification because the strain of the virus is not indigenous. Africa was declared free of indigenous wild polio in August 2020 after eliminating all forms of wild polio from the region.

“The detection of another case of wild poliovirus in Africa is very worrying, although not surprising given the recent outbreak in Malawi. However, it shows how dangerous this virus is and how fast it can spread. We support governments in southern Africa to step up the fight against polio, including conducting effective large-scale vaccination campaigns to stop the virus and protect children from its damaging impact,” said Dr. Matshidiso Moeti, regional director of the World Health Organization for Africa.

He added that further investigations are underway in Mozambique to determine the extent of the risk posed by the new case of wild poliovirus and the specific responses needed. Preliminary testing of samples collected from three contacts of the newly detected case were negative for wild poliovirus type 1.

Read:  Reasons why your child should play video games in moderation!

Vaccination campaigns to prevent the disease from spreading

Mozambique recently carried out two mass vaccination campaigns in response to the outbreak in Malawi. During both, 4.2 million children were vaccinated against the disease. Efforts are currently underway to help strengthen disease surveillance in Malawi, Mozambique, Tanzania, Zambia, and Zimbabwe. The five countries will continue mass vaccinations, with plans to reach 23 million children aged five and under with the polio vaccine in the coming weeks.

Globally, wild poliovirus is endemic only in Afghanistan and Pakistan. Poliomyelitis is highly infectious and mainly affects children under five years of age. There is no cure for polio and it can only be prevented through immunization. Children around the world remain at risk of contracting wild polio type 1 as long as the virus is not eradicated in the last remaining areas where it still circulates.

NGL, the new Instagram trend that puts your data in serious danger