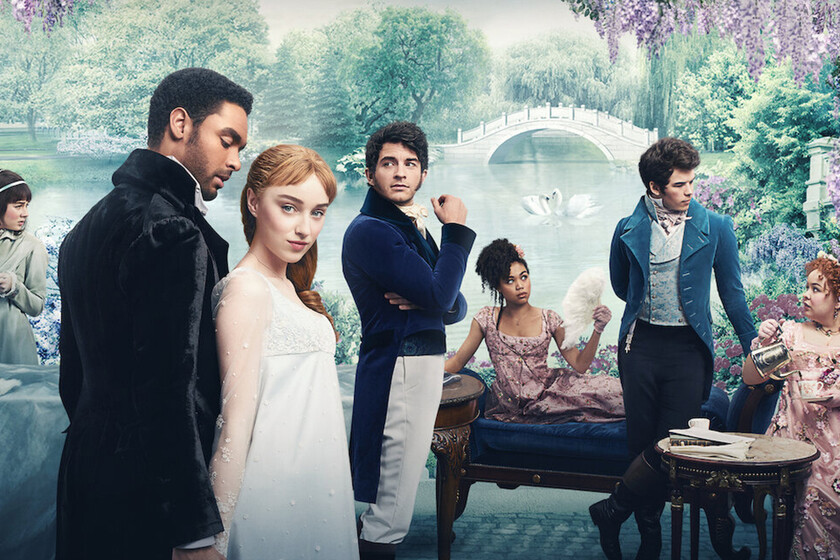 ‘The Bridgertons’ was one of Netflix’s most successful premieres, with the romance between Daphne Bridgerton and the Duke Hastings keeping more than 82 million homes hooked as estimated by the streaming platform. It has only managed to steal the crown ‘The Squid Game’ as the most watched series in its premiere, but The second season of Shonda Rhimes’ **period drama premieres this Friday, March 25. and it is possible that he will regain the throne.

If you are one of those who aired the first season in a sigh and you don’t have a clue about what happened (because a year or so has gone by between season and season), here we leave you a summary of the most important thing you need to remember about ahead of this new batch of chapters. Be careful, logically we are going to gut the first season and there are spoilers!

Index hide
1 Daphne and the Duke’s complicated relationship
2 Twelve Bridgertons by the dozen
3 across the street
4 But who is Lady Whistledown?

Daphne and the Duke’s complicated relationship

The first season of ‘The Bridgertons’ kicks off with Daphne Bridgerton being presented in society. She is the oldest daughter in the family and quite a beauty, so it is expected that she will have many suitors and that she can arrange a good marriage for her before the end of the season. However, her brother Anthony does not look favorably on any potential applicant and pushes away any man who wants to get close to his sister.

The solution comes when you enter the scene Simon Basset, the Duke of Hastings, one of the town’s golden bachelors and Anthony’s best friend. Simon doesn’t want to get married or have children… So he and Daphne come up with the definitive plan so that Daphne grows suitors everywhere and he can escape annoying mothers who want to set him up with their daughters: both will pretend to be engaged.

The plan goes smoothly until the two actually fall in love and end up getting married before the season ends. Although everything goes smoothly at first, a new problem soon arises: Simon doesn’t want children and lies to Daphne that he just can’t. At first Daphne is fine with this arrangement, but little by little he realizes that her married life is very lonely and he wants to have a baby more and more.

The situation worsens Daphne and Simon’s sexual and marital lives, with her thinking that her husband has been taking advantage of her inexperience to uphold a spiteful oath he made against his own father (the source of all of Simon’s traumas). Finally, and thanks to the intervention of Lady Danbury and Lady Bridgerton, the marriage manages to realize how much they love each other and they reconcile at the end of the season, when they also decide to have a child together.

Twelve Bridgertons by the dozen

The Bridgertons are a fairly extended family consisting of the widowed Viscountess Violeta Bridgerton and her eight children: Anthony, Benedict, Colin, Daphne, Eloise, Francesca, Gregory and Hyacinth. The series tries to give some screen time to the whole clan, and although the main plot of the first season revolves around Daphne, the elders of the family also have their own subplots that will continue to be explored in the new chapters.

Anthony Bridgerton He is the oldest of the children and the head of the family since his father died. During the first season he is at an important crossroads, as he is in love with an opera singer named Siena and also tied to her responsibilities in the family business. After Siena breaks up with him and seeing how his friend Simon has settled down, she decides it’s time to stop dabbling and start a family befitting his position in society. The second season focuses more on him, so we’ll have to see if he pulls it off.

then follows Benedict, who is still trying to find his place in the world as a second son. During the season, Benedict discovers his love for art and the life of artists, eventually deciding to follow his heart and start dating dressmaker Genevieve Delacroix despite their class differences.

Colin, the third child, is in the thick of a love triangle between Penelope Featherington and Marina Thompson (now after we get there, chill), but he eventually escapes the drama by leaving for Europe at the end of the season. Then Daphne would come, we already know how things are for her, and the last of the older Bridgertons is Eloise, the second daughter of the family.

Eloise She will be the next to enter society and there is nothing she wants to do less. She brags about being an intellectual and she wants to study and go to college instead of waiting for a good marriage proposal. during the season becomes obsessed with discovering the identity of Lady Whistledowneven coming to collaborate with the queen in her investigations.

Right across from the Bridgertons lives the Featherington couple with their three daughters: Penelope, Philipa and Prudence., who initially do not have very good expectations when it comes to getting married. To finish driving the nail into the coffin, he gets to live with his cousin Marina Thompsonwho turns out to be much more popular.

Things get complicated when Lady Featherington discovers that Marina is pregnant and there is no way to locate her boyfriend, so she tries to arrange a marriage as soon as possible to avoid scandal. Marina then begins to charm Colin Bridgerton, and Penelope tries to do everything to separate them, until finally Lady Whistledown reveals Marina’s pregnancy in her magazine and Colin is devastated.

Despite all the drama, things work out for Marina, who ends up marrying her deceased boyfriend’s brother. The future of the Featheringtons is a bit up in the airas Lord Featherington’s gambling debts have been piling up and increasingly taking a toll on his family, who end the season penniless and with a distant relative poised to inherit the house.

But who is Lady Whistledown?

Throughout the first season of ‘The Bridgertons’, Lady Whistledown’s gossip pamphlets have got London hookedincluding the queen. The malicious comments and innuendos of the writer give the final push to many plots, and the mystery of her identity has a good number of characters in suspense.

Although there are several possible candidates, the last chapter of the first season reveals that Penelope Featherington is Lady Whistledown, something that is kept secret for much longer in the original Julia Quinn books. Whether Eloise ends up finding out about her best friend’s secret life and how this affects her relationship remains to be seen, but we’ll still have to wait a few more days to see where this all turns out.