When are the December 2022 holidays?

What is tapioca, properties and how to cook it 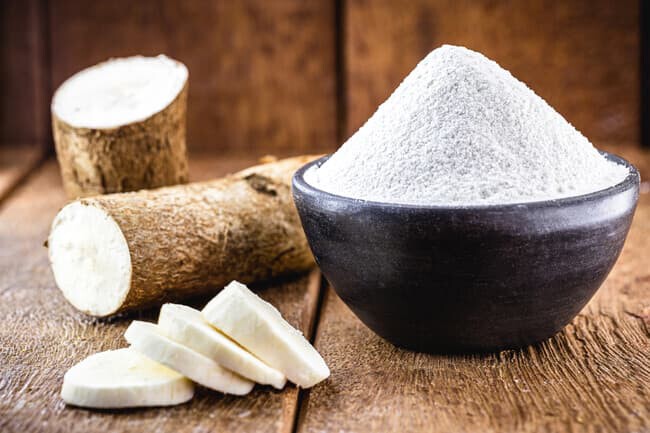 This tuber of high nutritional value It is not seen much in our country, but the truth is that in Latin American lands (also in Africa or Asia) they have been cultivating it for many years because they know its properties well, health benefits and uses in the kitchen, both sweet and salty.

If in the end you are curious, you should know that it is not going to be easy for you to find it in your usual supermarket, so we suggest that you directly skip this step and either buy it online, or go directly to your reference herbalistsince in this type of establishments they do usually work with this type of product.

Index hide
1 Tapioca, the starch from cassava
2 What is beneficial about consuming tapioca?
3 How to work with tapioca in the kitchen

Tapioca, the starch from cassava

In some countries it is known as manioc, casabe or guacamota, but in the end they are different names to refer to the same food, which is nothing more than a starch extracted directly from the cassava root. Usually you will find in the form of spheres or pearlsbut if you look carefully you can find tapioca in the form of flour, starch or flakes.

It is generally white in color, has no odor and is characterized by a slight sweet taste. Its name comes from the Guarani language (spoken by 6.5 million people in the Southern Cone of America). In that language, typiog means “starch or carbohydrate that is extracted from cassava”. Although it comes from South America, where It is considered a staple food.has been spreading over the years to establish itself in some countries in Africa or the Asian continent, such as Thailand or Vietnam.

In order to obtain tapioca from cassava, first we have to extract the starch from the tuber to submit it to an artisanal process that consists of boiling and washing it to finally dry it. It is a fundamental step to achieve remove toxins that are naturally found in food and are slightly poisonous, such as cyanide.

Read:  How to put music on Discord

What is beneficial about consuming tapioca?

There are many tapioca properties, a food that is usually recommended to people with celiac disease because it does not contain gluten, it is not grain and it is not nut. Besides, it’s allergen free more common.

According to a study by Newcastle University, it is rich in linamarin, a component that helps kill cancer cells. On the other hand, it provides minerals such as iron, so it helps prevent or combat anemia. It also stands out for its high fiber content, which help improve digestion and, incidentally, prevent constipation, inflammation and abdominal pain. And, as if all this were not enough, it improves blood circulation, oxygenates the cells, strengthens bones and reduces the risk of osteoporosis.

On the other hand, it should be noted that tapioca already dried does not have added ingredients such as fats, sugars, sodium or preservatives.

How to work with tapioca in the kitchen

Thanks to your neutral taste, tapioca is used both in sweet dishes, such as a pudding, milk desserts or tapioca pearl tea (bubble tea), as well as in salty preparations such as soups or sauces. And just like cornstarch, works great as a thickener food.

But the most common if you want to have a first approach is to use tapioca pearls and follow three simple steps to enjoy them in a more basic version. To do this you have to heat 1 liter of water and, once it is boiling, add 1 cup of tapioca spheres that you will leave cooking over medium heat until they become transparent. From there you can experiment with it as they do in Taiwanese cuisine.

It is also common, as shown in this image, to cook it hydrated as a crêpe and fill it with banana and cinnamon, or with many other things that can occur.

In DAP | The Nikkei revolution: how Japanese immigrants developed the most successful gastronomy in Latin America in Peru

When are the December 2022 holidays?