Bullfrag
Home Animals What is mold, why does it appear in our food and when... 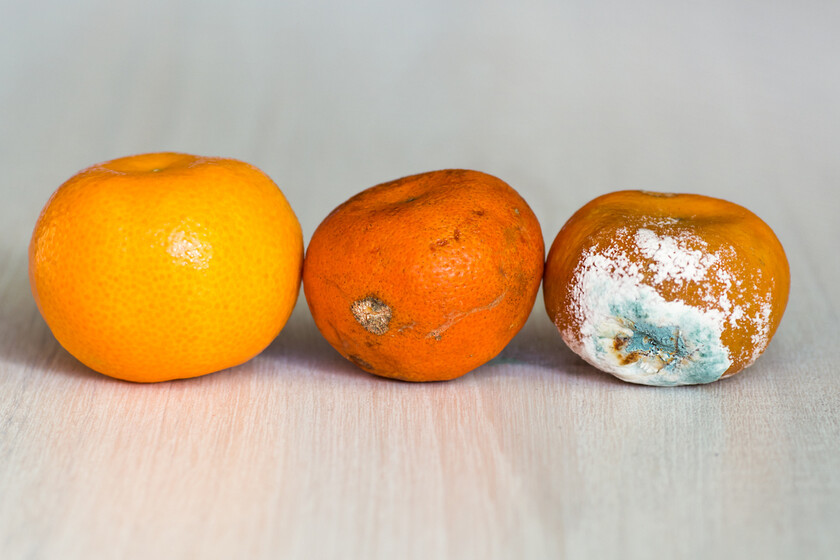 The mold that appears in food is a clear example of why natural is not always better or healthy, but quite the opposite. A very common practice in the presence of mold, which almost all of us will have done at some time, is to discard the contaminated part to consume the rest, but this custom can be dangerous due to mycotoxins. Knowing what exactly mold is, why it arises and when it is edible allows us to reduce food waste without putting health at risk.

Nobody likes to throw food away and, in fact, food waste is one of today’s big problems, but it will never be worth putting your health at risk just to take advantage of an apple or half a package of sliced ​​bread; cases of extreme need aside. As much as it has been “done like this all our lives”, at any moment we can suffer an intoxication. Mycotoxins, in addition, can have serious effects such as problems gastrointestinal, kidney and liver disorders or fetal damage, and in the long term they are cancerous.

Index hide
1 What is mold and why does it appear
2 How to deal with mold: when is it dangerous?
3 It is not mold all it seems (and there is also edible)

What is mold and why does it appear

We call mold various species of tiny mushrooms (of the kingdom Fungi) that develop in an organic medium, often in decomposition, which is nutritious for their growth. Although it can appear outdoors, it is more common to appear in closed spaces, away from light, and with high humidity. It is also favored by high temperatures, although that does not at all prevent its appearance in cool places, even in the fridge. Moisture and organic matter is what he likes the most.

Although there are mushrooms that are not dangerous, and in fact we can consume them, there are genera dangerous due to mycotoxins that silently and invisibly produce and contaminate food. These mycotoxins are toxic substances and those that pose a health risk if ingested.

Fungi are practically everywhere. When they find ideal conditions of temperature and humidity, the spores germinate and their life cycle begins. At this time, the concentration of toxic molecules is high and they can be excreted into the environment. # microMOOCCA3 pic.twitter.com/iljzErKDX7

Fungi spores surround us everywhere; When they find the ideal conditions for their development, they germinate and their life cycle begins. In this early phase, potentially dangerous fungi concentrate a large number of toxic molecules and expel them to the outside; if mold appears on food, mycotoxins can penetrate thus in the same or spread and colonize nearby products.

The big problem with these toxic substances is that they cannot be seen, nor can they smell, or leave a taste. We can only locate the initial mold, but the mycotoxins spread without leaving a trace, giving us the false idea that, if we remove the part that we see contaminated, the rest of the food is suitable for consumption. This practice, like experts point out in food safety as Beatriz Robles, is dangerous, and inadvisable due to the possible consequences it can have on health, in the short and long term.

Mold can appear on any phase of the food chain, from the field itself to our pantry or refrigerator. Since producers and distributors try to control as much as possible the product they send to the points of sale, it is more likely that it will already appear in the store in fresh products stored for too long without refrigeration or, more frequently, in the home.

Packaged foods, such as sauces, sausages, sweets or jams, do not usually develop mold until they are opened, as the industry applies packaging and preservation technologies and controls, which precisely allow food to be preserved for longer under the indicated conditions. The use of vacuum, protective atmospheres or preservatives they prevent the appearance of fungi, although sometimes there are failures in the chain or the containers are broken.

How to deal with mold: when is it dangerous?

The first thing to do is distinguish between a fruit or vegetable that has just taken a hit or is overripe from mold. We have already mentioned that these fungi grow in the form of filaments, creating an irregular substance, usually developing a kind of fluff or sponge and with a color between bluish, greenish and whitish or yellowish.

They can also appear in processed foods such as sliced ​​bread and other bakery and pastry doughs -almost always made with wet crumbs-, cereals, nuts and seeds, sauces, preserves, ready meals, jams and compotes, etc. In packaging such as fried tomato bricks, sauce cans or yogurts, mold can appear if it has not been packaged correctly, if it has any default or breakage, or if we have opened it and left it as is in the fridge.

Do I throw it away or not? When in doubt, better not risk

Since mycotoxins are invisible, it is not enough to remove the contaminated part. The safest thing is to throw away all the food, for example the whole apple or the whole jam jar or tomato jar; even if we only see a little mold on the lid or sides of the container. In groups of small fruits, such as a basket of raspberries, it will be necessary to value if the mold is very localized in a few units and properly disinfect the rest; when in doubt, better discard.

When it appears in foods such as a bag of sliced ​​bread, a box of cereals or a package of nuts, unfortunately you have to get rid of all product. Throwing away just a few of the adjacent slices does not assure us that the rest of the package is safe.

In addition, it is advisable to handle the food with gloves or not to touch the moldy part, not to smell it closely and throw it away inside another bag tightly closed. It is convenient to check the storage space and the nearby products – especially if it is vegetables – and clean and disinfect the fruit bowl or the fridge.

Although, in principle, the harder and fibrous vegetables, with lower water content, such as carrots, could be cut to remove the moldy part, when in doubt it is better prevent. With the knife itself, we could be helping to spread these mycotoxins without realizing it. In the harder or more cured cheeses, such as Parmesan, or pressed hard pasta, it is possible to remove the entire affected part and about 3 cm around it, without the knife touching the mold.

We have already said that prevention is better than cure – you don’t play with health – but sometimes we could mistake something that is not mold for mold, wasting safe food. It happens with the whitish substance that covers some sausages cured, such as salami or fuet, sometimes with greenish or bluish hues.

These are species of microorganisms (Penicillium nalgiovense and Penicillium salamii, fundamentally), which intervene in the healing process of the cured meat, giving its organoleptic characteristics and also protecting the interior. In this case it is safe and the sausage will not be in bad condition.

There are also the mold-cured cheeses, almost all included in the group of blue (Roquefort, Cabrales, Gorgonzola …), and those with moldy bark, such as Camembert or certain goat curls. In these cases, both the cheese itself and the rind are perfectly edible.

The white speckled substance that often appears in the more mature cuts of cheeses, and also in sausages such as ham, it is not moldy. Is about crystals formed calcium lactate or amino acids, generally tyrosine. The former are more diffuse, thin and moist, while the latter tend to appear more in long-maturing cheeses, and are harder.

These crystals therefore they are not molds and they do not contaminate the cheese. They can be ingested without problems; if it is unpleasant to the eye or to the palate, you just have to cut it with a sharp knife or cheese cutter.

Picaña braised with onion, garlic and parsley, a simple recipe for a special meal