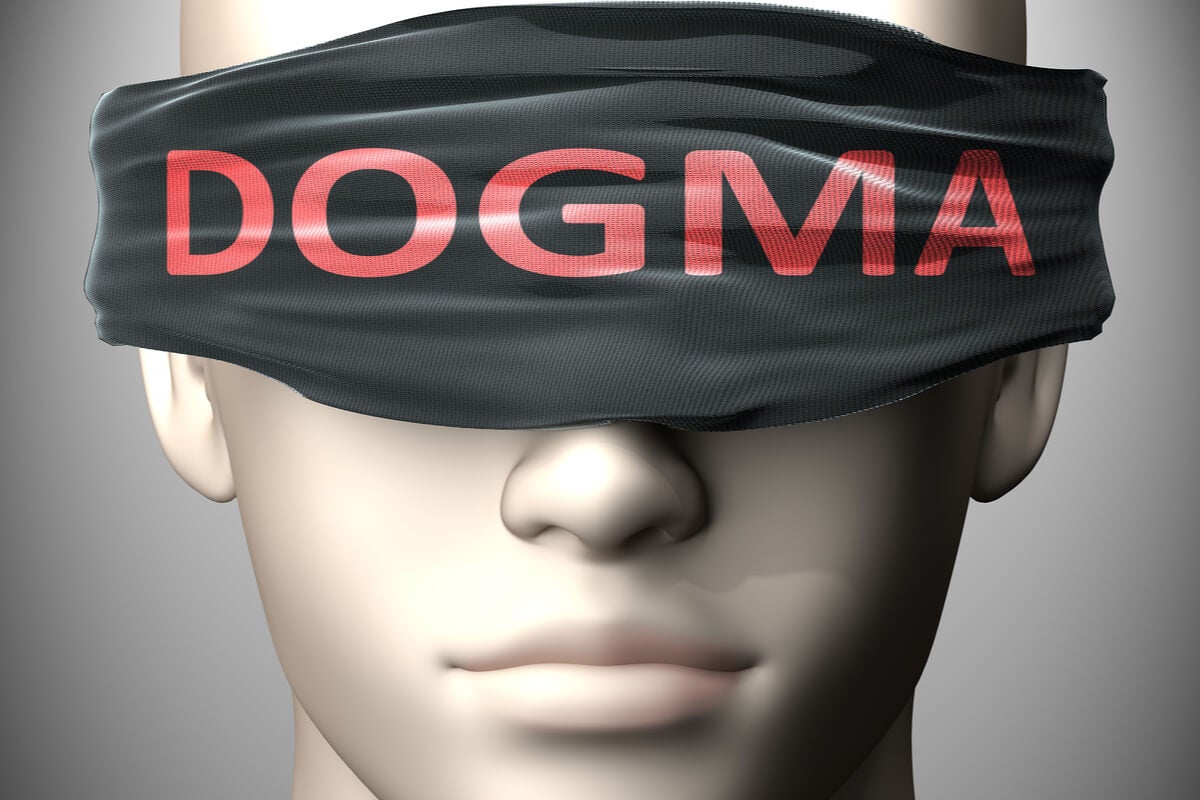 Dogmatism, as a philosophical current, defended the need to accept the world as we appreciate it, without subjecting it to questioning. The current meaning differs somewhat from this notion.

A dogma is a proposition that is assumed to be absolute truth, undeniable and irrefutable. Its foundations are not subject to discussion or questioning, since its veracity (whether demonstrable or not) is unobjectionable. Now, at present, dogmatism can be understood as the propensity for dogmas.

However, in philosophy, dogmatism refers to a current of thought that defended the need to accept the world as we appreciate it, without subjecting it to questioning. It relies on the ability of human reasoning to acquire the truth.

Dogmatism, as a philosophical movement, originated in Ancient Greece, when the dogma it was understood as a philosophical or grounded opinion. Subsequently, this term continued to be used throughout the history of the West, especially associated with Christianity.

Dogmatism as a philosophical current originated in Ancient Greece, between the 6th and 7th centuries BC. It is considered the oldest school of thought and differs from the meaning we attribute to it today.

In ancient times, dogmatism implied accepting the world as we see it, without questioning it. The founder of this doctrine is Thales of Miletus, considered the first philosopher of Western culture. Later, in 1545, dogma was applied to religion and assumed as an absolute and unquestionable truth from which the rest of knowledge derived.

The characteristics of philosophical dogmatism are as follows:

For its part, we could summarize the characteristics of contemporary dogmatism as follows:

The main exponents of philosophical dogmatism are the following. Let’s learn more about their lives.

Greek philosopher, geometrist, physicist, mathematician and legislator, Thales was the initiator of the School of Miletus. He did not leave any written work, so his theories and knowledge come from his disciples.

He is considered the first Western philosopher who tried to rationally explain the different phenomena of the world. Thales affirmed that water is the first element, the beginning of everything. Therefore, he gives it life. It also gives it a soul, because the soul makes things move and the water moves by itself.

Read:  Abreaction: what is it? - Better with Health

Anaximadro was a philosopher, geographer and disciple of Thales of Miletus. For him, the constitutive principle of all things is apeiron, which is not water, nor earth, nor fire nor air. It has no concrete form, it is infinite, imperishable, indestructible and immortal. The cosmos is born, develops and perishes within that apeiron.

Anaximenes was Anaximander’s companion and successor. Like his teacher, believe that the beginning of all things is infinite. However, he defended that this principle is a concrete element: air.

According to this philosopher, air transforms everything through condensation and rarefaction. That is, rarefaction generates fire, while condensation forms wind, clouds, water, earth, and stones. From these substances, the rest of things are created.

This pre-Socratic philosopher defended that the beginning of all things was becoming, depicted through fire. That is, Heraclitus maintained that the foundation of everything is in incessant change. The entity becomes and everything is transformed in a process of continuous birth and destruction.

What is the opposite of dogmatism?

For some thinkers, dogmatism is opposed to skepticism, since the latter characterized by constant doubt and defends that the human being is unable to obtain absolute and true knowledge about things. For his part, for Immanuel Kant, dogmatism is opposed to criticism. This last trend can be understood as an attitude that considers knowledge something impossible and undesirable without prior criticism.

Furthermore, we could affirm that dogmatism is contrary to scientific knowledge, since the latter is open to the modification of postulates. Also to the establishment of new conclusions before the arrival of other evidence.

Advantages and disadvantages of dogmatism

Dogmatism, understood as the requirement that an argument be accepted as true without the possibility of questioning it, has no advantage. On the contrary, taking a dogmatic stance carries many dangers.

We see it in politics, in religion, and in relationships. If we hold dogmatic beliefs, we close our minds to alternative perspectives and opinions. In other words, dogmatism produces rigidity in thinking, which causes emotional and behavioral consequences.

For example, people who uphold dogmatic beliefs and do not allow alternative explanations will often experience anger. Especially when there are discrepancies between your expectations and reality.

For its part, a study found that dogmatism is one of the factors that negatively affect well-being. In this case, it was established that dogmatic people present an inflexible cognitive system that emerges as a stable personality trait and reduces their adaptation to the environment. This process results in a reduction in happiness and an increase in aggression.

Finally, rational emotive behavior therapy suggests that irrational beliefs are dogmatic in nature. That is, they are inconsistent with empirical reality, illogical and prevent people from achieving their goals.

Dogmatism as a philosophical current differs from the contemporary meaning that we give it to this concept. Referring to the last meaning, we must be careful and avoid that our beliefs are assumed as absolute truths.

Otherwise, we will be prone to intolerance and disrespect for positions different from ours. Let’s try to cultivate openness and flexibility of thought.