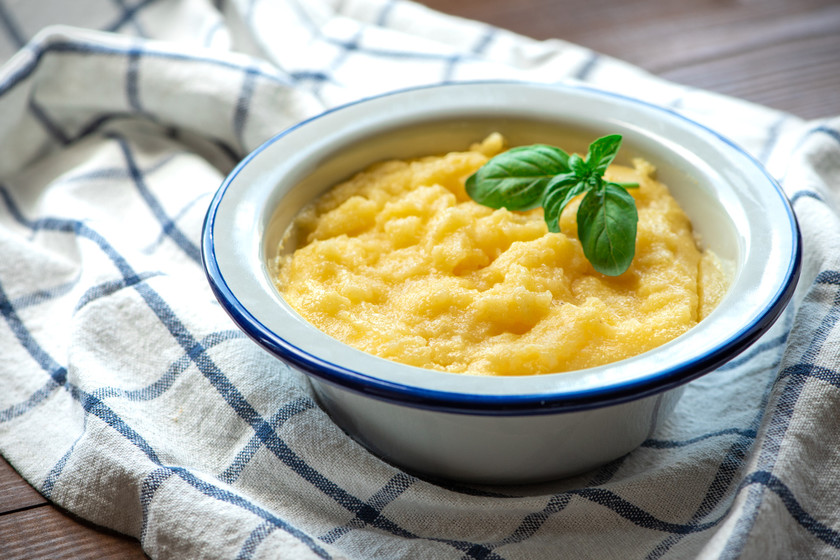 Without detracting from the different varieties of pasta and pizza that Italy boasts, its gastronomy offers much more than these two world icons. Each territory preserves its idiosyncrasy, its own culture that is perfectly reflected in traditional cuisine. And few dishes are more typical of northern italian than polenta.

So much so that the term became popular polentone to designate its inhabitants disparagingly, as it is still a food that has not completely shaken off its aura of “poor man’s food.” Polenta was for many centuries the basis of the farmers’ diet and more humble people from the northern regions, also with tradition in the Swiss Ticino and nearby territories.

Today, especially outside of Italy, we equate it to corn grits, but not all polenta is corn and not all grits is polenta. It is convenient to clarify the terminology a little to know exactly what ingredient to use and how to use it in the kitchen according to the recipe that we intend to prepare.

Polenta before and after America

Corn did not reach Europe until the discovery of America, but polenta was already consumed much earlier, since it was already popular in antiquity. In fact, polenta derives from latin pollen, using to designate a kind of fine flour or almost powder, a term from which our word “pollen” also derives.

Before the arrival of corn in Europe, polenta or porridge was prepared with other cereals.

From its origin, polenta was nothing more than a version of porridge or porridge that have been the basic sustenance of the most humble population for many centuries. When there was little to choose from, the best recourse was to throw whatever available ingredient to cook with water – or, if you were lucky, milk, broth or wine – and get something hot to fill your stomach.

These pasty porridges were prepared, and still are, with wheat, rice, barley, chestnut, spelled or oats, until maize broke into Europe and rose as a crop of high profitability in the territories of what we know today as northern Italy (Veneto, Piedmont, Lombardy, etc.).

The maize plant adapted well to European soil in certain regions, displacing wheat and other crops less productive, earning its place as well as a bakery and kitchen ingredient. In the Iberian Peninsula, for example, the presence of corn flour in many traditional breads from Portugal or Galicia, or in the talos so typical of the Basque Country and Navarra, is notable.

In the aforementioned Italian territories, corn production was imposed in such a way that the population with fewer resources – that is, the vast majority – made this cereal a fundamental basis of their diet. The polenta abuse It caused serious health problems creating pellagra epidemics, but not due to the direct cause of corn, but due to the severe deficiency of group B vitamins.

Of semolina and flour

Polenta is prepared with semolina, which we could say is a type of flour. As we have already seen here, it is not necessary to confuse the different grinds of the cereal or their presentations. For English speakers, the terminology is complicated as they often use cornflour often to designate any variety of processed corn, when they do not behave the same.

In short: you cannot prepare polenta in the traditional Italian style with cornstarch, nor with bread-making corn flour, nor with corn flour type PAN or “masa” for arepas or tacos.

Semolina is corn stripped of the pericarp -the outermost layer of the grain- and ground leaving a thick and much coarser than flour as such. The small granules are clearly visible to the naked eye, almost like fine couscous -which is nothing more than wheat semolina-, and to the touch it leaves a grainy, rustic, sand-like sensation.

If the grind is finer, without reaching the refinement of a flour as such, milder variants such as semolina, widely used in bakery to bake pizzas and other doughs. In the United States, where they have inherited the importance of corn from American cultures, they distinguish between different thicknesses of the ground (coarse, fine, grits) according to the recipe to be made.

And although you could make polenta with these coarsely ground corn flours, experts say that a truly authentic result will only be achieved with corn grits. Italian, grown and processed specifically for the preparation of polenta.

As we progressed at the beginning, polenta It does not designate a particular ingredient, but rather a specific dish -or dishes. However, the popularity of this preparation and its expansion throughout the world have ended. matching raw material and ingredient, and so it is marketed by many brands, adding to the confusion.

Corn has been the most consumed, but variants are still prepared in Italy with other ingredients. Thus, we can find polenta gialla or yellow, the most common based on corn grits; polenta bianca or white, made with a specific variety of corn or with other flours such as chestnut; and darker polentas, usually with buckwheat (buckwheat) alone or mixed with corn.

Read:  How to use a mobile to increase the Wi-Fi coverage of the router

When buying it, you also have to watch out if it is natural polenta (roaring) or its version pre-cooked or instant. The latter is nothing more than semolina already cooked previously and dried again, which only takes a few minutes to cook, and also less liquid. Let’s say it is an equivalent to the usual couscous in supermarkets, where the wheat semolina is presented to us already precooked.

As a humble dish, acquire different shades and recipes depending on the region or country. In Italy, in addition to the north, it is extended to other areas, although fundamentally it has more tradition in some central territories, such as Tuscany. A very popular variant is the polenta taragna, darker, combined with buckwheat, also the blunt polenta uncia and concia, with plenty of cheese and butter.

How to cook polenta

The basic procedure is very simple: you just have to cook the semolina in very hot water with salt. Depending a bit on the variety of corn and how it was processed, the total cooking time can range from 30 minutes to almost an hour. Using precooked polenta we will barely need between one and five minutes.

The semolina / water ratio is also variable, and it depends a lot on the result we want to obtain, with a polenta. creamier or thicker, puree type. In addition to personal preferences, the way to serve it and the accompaniments are important factors to take into account.

It is best to start by paying attention to the manufacturer’s or producer’s instructions, and from there adjust quantities to taste. As with all traditional recipes, the best way to cook polenta is by eye and make adjustments on the fly. It’s another variant of the old “add the flour that admits“.

As a standard measure, we can start from 500 g of semolina for six people, with 1.5 liters of water. If you want more creamy, you can add more liquid, or cook it for less time. Always getting cold will thicken.

Then we follow the following steps. We heat the water in a pot or casserole with a thick bottom, and salt it when it comes to a boil. Once it comes to a boil, add the semolina little by little (like a rain) stirring with a few rods or a spoon, gently. We lower the heat and keep cooking soft, stirring constantly until it reaches the desired consistency.

Ideally, the polenta should be detached from the walls of the pot, but if you use semolina without precooking, do not trust: we will need at least 30-45 minutes for a really creamy and honeyed texture. There are also those who leave the fire to a minimum, covering the pot, extending the cooking up to an hour and stirring very few times.

When ready, add more salt, fresh or dried herbs, a splash of milk or cream, butter and / or cheese.

You have to be honest: polenta as is it’s bland and its texture may disenchant today’s palates. That is why you have to consider it as a blank canvas to start giving it more life with the accompaniments and other ways to take advantage of it.

To start with, we can cook it with broth chicken, meat or vegetables, or add milk and / or light cream replacing part of the water. The butter and cheese at the end are almost essential; the amount will depend on the judgment of each chef. If we prefer to avoid milk fat, a generous jet of good olive oil will give it a very tasty nuance.

Polenta is traditionally the perfect garnish for hearty fall and winter dishes: stews and stews with deep flavors and intense aromas, stews with legumes or roasts of meats. The important thing is to have a good tasty sauce to bathe the polenta in it. A ragout or goulash are perfect options.

Another more attractive way to cook polenta is let it cool extended on a tray until thick and solid. Thus, it can be cut into cubes, triangles or cubes to grill, sauté, fry or gratin in the oven. It can even be used as a base for savory cakes, fake pizzas or as a substitute for French fries.

In recent years it has been recovered as an ingredient for more sophisticated elaborations in haute cuisine restaurants, in the trend of vindication of the cucina povera. In addition, semolina can be used as a thickener and nutritional supplement to soups and stews, and for the preparation of bakery and cake shop.

Here are some simple recipes that demonstrate its rich versatility:

The Mercedes C-Class Coupé and Cabrio are approaching their goodbye

Marvel’s Midnight Suns has been delayed until 2023