What became of Sly Cooper, the phenomenal Sucker Punch trilogy that rivaled Jak & Daxter and Ratchet & Clank on PS2

By CooperSeptember 22, 2022No Comments7 Mins Read 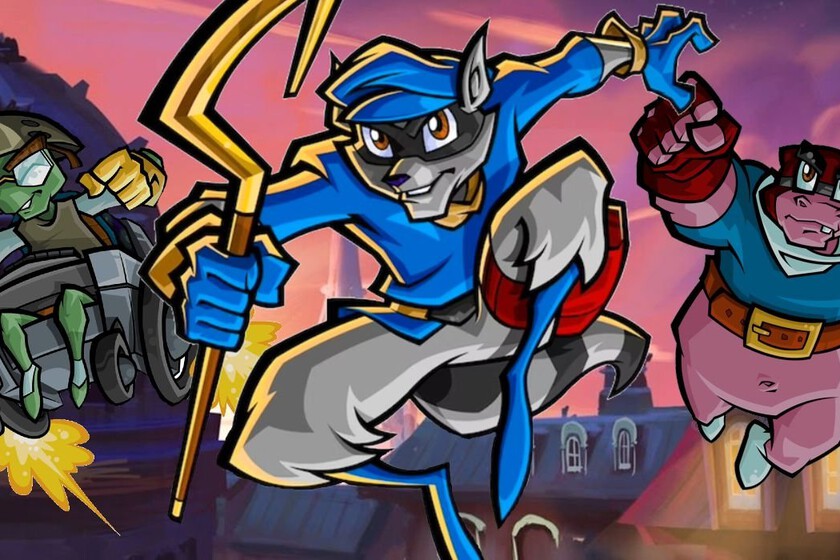 A raccoon with a mask, a hippopotamus that is pure muscle and a turtle that acts as the brainiac. This trio of anthropomorphic animals are absolutely legendary after marking an era in the 2000s. If you grew up with PS2 and PS3, it is impossible not to remember the hilarious Sly Cooper.

Four games and a remaster is the legacy that makes up this group of animated thieves. With the last installment releasing in 2013, it’s been many years since we last heard from the franchise from Sucker Punch Productions. Therefore, it is time to look back, investigate the past and discover what has happened to the saga.

One for all and all for one. The union is strength in any team if it wants to win or, in this case, the money. Sly Cooper introduced us to some thieves led by the character with the same name and with the motto of just steal from those who deserve it.

That is to say, a kind of Robin Hood of more modern times who put his glove in the pocket of the richest, but only of those who amassed fortune based on fraud and forgery. And he is not bad at homework since he comes from a family accustomed to theft and robbery.

However, this vigilante loses his parents after the assault of the Five Evil Gang, who steal the family book where all the intrusion techniques are gathered. A string of skills that have transcended a lineage that combines raccoons from Ancient Egypt, Japan and even medieval Europe.


At the age of eight, Sly is orphaned and ends up in an orphanage where fate smiles on him when he meets Murray and Bentley, his most faithful associates and friends. Over the years they will become a headache for the underworld around the world and especially for Carmelita Fox. The Interpol inspector will always be behind the group of thieves and will have her pluses and minuses with Sly himself. . They are on opposite sides and that is the main impediment for love to flow between them.

A context to which a couple of more elements must be added. In those PS2 early days, there were two other game franchises at Sony that took most of the spotlight. Insomniac Games shone with Ratchet & Clank after giving the bell with Spyro and Naughty Dog shone with the intrepid couple formed by Jak & Daxter leaving behind the smash hit of Crash.

An apogee of creativity for the adventure, platform and action genre that gave us years of enormous quality. In Sly’s case, it all started in 2002 and ended too quickly.

A fleeting step, but indelible

While today’s big productions have a really long development time (I don’t look at anyone, Cyberpunk 2077), the truth is that 20 years ago it was much easier to launch games like churros. The reuse of assets, models and textures was much more fluid and that is why we saw the main trilogy in just three years.

Sucker Punch managed to publish three titles on PS2 in that period, with an excellent level of quality. The first one arrived in Europe in 2003, with a previous launch in 2002 in the rest of the territories, and laid the foundations mentioned above. The book Ladronius Mapachibus was the object of desire of Sly and his colleagues after the crime perpetrated by the Gang of Five Evil. Of course, they achieve their goal after much effort.

Just six levels in which the developer managed to exploit all the possibilities. The world presents a spectacular animation thanks to the use of toon shading, a technique that allowed to offer animated characters with realistic details. The action is branded by Sly, who carries his family’s old cane and is characterized by being able to solve any situation with great agility. Including taking down the evil Clockwerk that haunted his family tree.

There was no time to lose and just two years later it was launched Sly 2: White Glove Thieves. This time, aspects of the first installment were further improved, allowing us to control Bentley and Murray. Each of them has unique characteristics, such as ranged shooting or melee potential.

Read:  Netflix would have given the green light to seasons 4 and 5 of The Witcher

The formula was refined by adding more platforming, more stealth, more collectibles and expanding a story that did not go unnoticed. Such was the confidence of Sony and Sucker Punch that the third installment was worked on at the same time. Sly 3: Honor Among Thieves It was released in 2005, once again on PS2, including a wide variety of mini-games and an extra replayability point by incorporating challenges in the various levels.

Coincidences of fate, the truth is that Naughty Dog and Sucker Punch felt with the approach of PS3 that an era had ended for them. More veteran developers, with experience and wanting to experience new recipes. Uncharted was born from the reflection of Indiana Jones and Infamous was the electrifying bet of Sly’s parents.

Yes ok Insomniac still hasn’t abandoned Ratchet & ClankHe did go down the shooter path with the Resistance series. A bleak picture for the raccoon and company that were abandoned for several years.

Everything changed with the appearance of Sanzaru Games, a studio that had already worked for Sony adapting Secret Agent Clank from PSP to PS2. The Japanese company entrusted him with the task of taking the Sly Cooper trilogy and making a remaster for PS3 and PS Vita. Said and done in 2010, which was the first appearance of the most furtive trio in five years.

Despite this, those who got hold of The Sly Trilogy collection were in for a pleasant surprise. A trailer anticipated what clearly seemed to be a fourth installment of the saga, so the community was already rubbing its hands. They had to be rubbed a little longer, as it wasn’t until 2013 that Sly Cooper: Thieves in Time came to PS3, becoming the fourth game in the saga.

As you might guess from the title, it was time to travel through different eras visiting Sly’s ancestors while reliving some of his most famous heists. Once again, the play ended with a scene of Sly in the desert, implying that we still had a ration of raccoon for quite a while. We have been wrong for years.

Despite that promise, the illusion was never fulfilled, since in 2014 it was revealed that there was no new game underway. Sanzaru Games focused on other projects and ended up being bought by Facebook in 2020 to work at Oculus Studios. It is not that the company forgot about the raccoon, far from it, since in 2019 they claimed to be very excited to return to the Sly universe if the opportunity presented itself.

And it is that the jug of cold water came with the statements of Mat Kraemer, a member of the study, revealing that that scene of the character in the desert was going to be programmed as a DLC that never saw the light of day. The flame of hope was extinguished, especially with a Sucker Punch focused again on infamous and looking to the future with Ghost of Tsushima.

For the last few years, Sony has treated the franchise with much silence. Sly appeared in PlayStation Move HeroesPlayStation All-Stars Battle Royale, two comics were published as a link between each work of the original trilogy and one was announced movie with trailer included. Yes, the next leap was going to be on the big screen, something that the company is currently doing with its main IPs.

However, the adaptation of Ratchet & Clank was a resounding failure which seems to have thrown Sony’s plans to the ground. Not even the animated series announced in 2017 and scheduled for 2019 seems to be released. Although it was evident that Sucker Punch was no longer looking to the past, it was its creator who was in charge of shelving it definitively.

“We have no plans to try again. infamous either Sly Cooper right now, and no other studio is currently working on projects related to those franchises,” was the lapidary phrase. We won’t see Sly again for a long time, if ever, and for now we have to settle for his inclusion in the catalog PlayStation Plus retro.