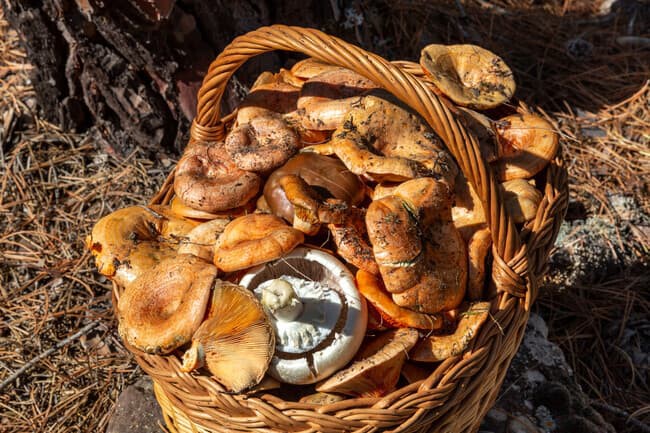 Regardless of whether you grew up in the country or in the big city, it is very likely that you feel predilection for mushrooms. And that you know how to perfectly differentiate between chanterelles, boletus or wild mushrooms, without having to resort to Google images. You also probably know that not all can be eaten and that taking this lightly can play tricks on you, but surely you do not know its health benefits and many other things that we are going to address from this humble corner.

But before we get into mode mycology professionals, his thing is that we start with the most basic. And we are not referring to learning how to make a mushroom scramble, a very simple recipe that has solved many lunches and dinners in our country, but to know what exactly are these mushrooms that have a fascinating physiology and that have so many followers in our country.

Index hide
1 What are mushrooms?
2 Properties of mushrooms that you did not know
3 The favorite mushrooms of the Spanish

We better start by making it clear what are not mushroomssince it is very common to find mushrooms and other types of mushrooms in the “Fruits and vegetables” section from the supermarket. Well, while all the vegetables and fruits we know come from edible plants (which contain chlorophyll, which is used to convert energy from sunlight into carbohydrates), mushrooms do not contain chlorophyll. That is they cannot photosynthesize and choose to get the carbohydrates they need from plants.

Once we have made it clear that they have nothing to do with plants or animals (they have their own kingdom, that of fungi), we clarify something that sometimes also creates some confusion. All mushrooms are fungi, but not all mushrooms are mushroomsIn fact, mushrooms are to fungi what a flower is to a plant. In other words, the mushroom is the part of the fungus that we see.

To close this section, we will talk about that unique physiology that draws so much attention. In this sense, you should know that the mushroom itself is made up of the mycelium, which is the underground part (which we do not see), the volva, which is found at the base and is usually bell-shaped, the foot or elongated body in which -not always- there is a membrane called annulus and, ultimately, the cap. It is what is also known as the “head” and is its most visible part, which in turn is made up of the cuticle and the hymenium, the lower part.

Properties of mushrooms that you did not know

It is not the main reason why many are looking forward to the months of October and November, but it never hurts to know What benefits can eating mushrooms bring us?. Although the first thing you should know is that these properties are much more relevant when one consumes wild mushrooms, and not so much in industrially cultivated ones.

That said, we are going to list all those reasons why we always have to keep mushrooms in mind:

The favorite mushrooms of the Spanish

Although everyone will always have their preferences, there is something that has nothing to do with taste but with objective data. And these show that there are several types of mushrooms that are the most consumed by the Spanish.

First, they are found, as expected, wild mushrooms (Agaricus campestris), which is one of the easiest to recognize. You will identify it by its white hat and its sheets of the same tone. They usually reproduce in meadows and pastures, and it is best to do not pick them when they are too ripe (when they have black plates) because they are more indigestible. It is, without a doubt, the most consumed variety in our country.

Next, we focus on the edible ticket (boletus edulis), which in some areas is known as “pumpkin”. You will have heard about it on countless occasions, especially from chefs and gastronomy fans. Its price not within the reach of any pocket, but if you have the opportunity to enjoy its sweet flavor and its very particular texture, do not hesitate. Note that its color changes, starting from a whitish tone, in its first days of life, to get closer to a more brownish tone as it gets older. It is most commonly found in coniferous forests.

It’s the turn of the grapefruit (Amanita Caesaera), which for many is one of the best edible mushrooms from Spain. Visually, it stands out for its large hat (ranging between 8 and 25 centimeters in diameter) and its orange or yellowish color. The most common is to find in holm oak and cork oak forestsbut also on calcareous terrain, safeguarded by chestnut or oak trees.

Let’s go now with two classics. On the one hand, chanterelles (Lactarius Deliciosus), very abundant and tasty. They have a convex and fleshy hat, colored between orange and reddish which, as the fungus matures, incorporates some green spots. On the other, the chanterelle (Chanterelle Cibarius), which is very easy to recognize by its funnel-shaped and yellowish hat. With a deeply fleshy texture and fruity flavour, it usually grows in oak, beech and pine forests.

And, finally, the coveted black truffle (Tuber Melanosporum). Although it is hard for you to believe, it is an underground mushroom a color halfway between black and brown that is highly appreciated in haute cuisine for its enormous value. To collect it you must have the help of a well-trained dog, keep in mind that being buried is difficult to locate. It usually grows in limestone soils next to the roots of oaks, hazelnuts or gall oaks.

In DAP | The 10 most important autumn and winter mushrooms in Spain: where to pick them, how to cook them and what varieties you should not confuse them with