Bullfrag
Home Update What are latkes? History and tradition of an essential dish of... 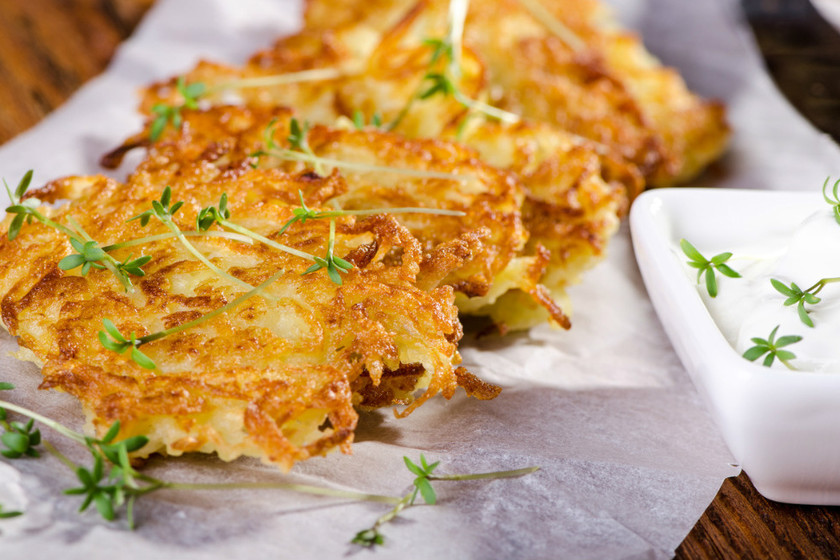 When I became interested in cooking, I never tired of exploring the web looking for recipes of all kinds. In those early days, a kind of salty potato pancakes, common in American blogs and pages, caught my attention. latkes. They reminded me of the Swiss Rösti, but I soon discovered that the great cultural and religious importance that latkes have in Jewish tradition.

Latkes are small cupcakes or fried pancakes whose base is grated potato and egg. Today you can find many variants combining other ingredients, vegetables and dressings, without there being a single and valid recipe. There are as many latkes as there are families, and it is tradition to prepare them during the Hanukkah or Hanukkah holidays, the great Jewish celebration.

Index hide
1 A must-see traditional Jewish dish on Hanukkah
2 But did Jews originally eat latkes? The curious history and evolution of the recipe
3 Ingredients, characteristics and variants of latkes today
3.1 Latkes with zucchini

I would dare to affirm without fear that many of the Jewish traditions that we know here they have come to us through film and television. The Hebrew people had great importance in past centuries of our history, and without a doubt they left their mark on our own culture, but today we have a little forgotten.

Of course, we all remember more than one scene from the big or small screen in which Jewish characters do not celebrate Christmas in December: they celebrate Hanukkah -or Hanukkah-. It is the festival of Lights or Luminaries, the commemoration of how the Maccabees defeated in the 2nd century BC. C. to the Hellenes thus recovering their independence, culminating in the purification of the Second Temple of Jerusalem. 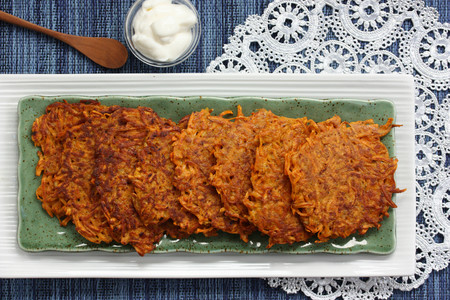 Is known the symbolic nine-branched chandelier, which during these festivals is progressively lit, according to tradition. It represents the supposed miracle that caused the original temple lamp to remain lit for eight days when it barely had oil for a day.

And whoever has looked a little better at any of those movies or series, will have seen the families cook and serve the famous latkes. As a great celebration, as in our Christmas, Hanukkah is celebrated as a family surrounded by good food and drink, which also has symbolic meaning and is already part of traditions that are passed down from parents to children.

The latke is part of that symbolism, since it is customary to serve food fried in oil that represents the miracle of the candelabrum. Although they are by no means the only deep-fried specialty in Jewish cuisine, latkes are especially popular in the United States, where many believe that the potato also has holiday significance.

But did Jews originally eat latkes? The curious history and evolution of the recipe 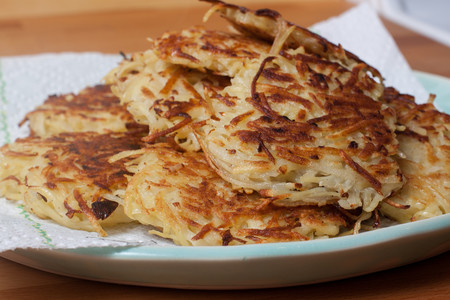 Anyone who thinks about it a bit will realize that the latke could not be a typical food of the original Hebrew people: simply because then there were no potatoes in Europe. And it is unlikely that Jews habitually fry with olive oil, the cheapest and most common was to use schmaltz, fat of animal origin.

Actually the original symbolic key is in the dairy, which have already lost prominence in the current latkes. They relate to the story of Judith, the heroine who dazzled Holofernes, the Assyrian general, with very salty wine and cheese dishes, which aroused his thirst. When the soldier fell asleep drunk, he cut his throat with his own sword. 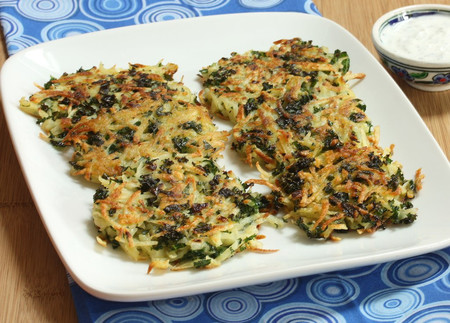 The most curious thing is that the Book of Judith is considered an apocryphal text that is not part of the Jewish Bible, but it is a character that became very popular in the Middle Ages. In one of the interpretations that circulated at the time, Judith gave the general some pancakes with salty cheese, and that gesture became associated with the Hanukkah traditions.

Probably the first latkes that the Jews cooked were learned in Italy, and they would be a kind of fried ricotta cheese pancakes. Spain expelled the Jews from Sicily in 1492, the exiles taking refuge in the north of the transalpine country. Being a fried dairy, they were quickly associated with the Hanukkah festivals, although in later centuries pancakes were cooked with cereals.

The final evolution would take place from the 19th century, when the potato was already settled in Europe as a staple food for much of the poorest population. There was simply nothing else to eat. The Jews who emigrated brought their traditions to the United States, where the latke as it is known today ended up taking its final form, now fried in olive oil.

Read:  Historic discount! AirPods have never been so cheap 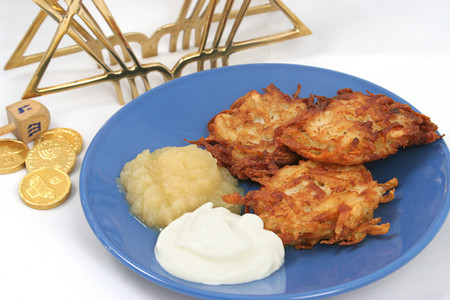 Whether or not they are aware of so many historical ups and downs, latkes cannot be absent from Jewish Hanukkah tables and are also repeated on many festivities the rest of the year. It is a simple recipe but one of those traditional ones that one associates with his childhood and his family, because each house has its own recipe.

And you don’t have to be a Jew to enjoy them; the latkes they are a really tasty snack, very versatile and that adapts well to the particular taste of each one. Perfect to share and to serve with guests or in an informal meal, accompanied by whatever we want.

There are two opposing positions on how should the latke be perfect: 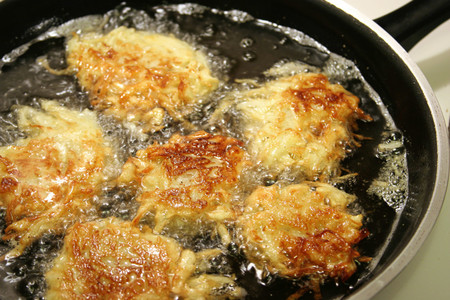 In any case, the fundamental ingredients of a basic latke are three:

It is advisable to drain the water from the vegetables beforehand and fry them in plenty of hot oil. They can also be cooked on the grill, or even baked. Finally They are accompanied by apple puree, sour cream or any other sauce to taste. Today they are used as a base to form more luxurious snacks, with salmon, cheese or even caviar. It is important to serve them at the moment to keep them very crisp. 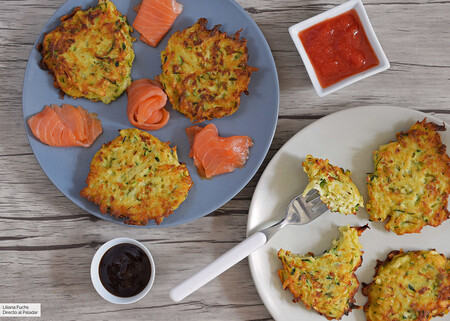 This simple version of latkes combines the traditional potato with zucchini for a dish. more nutritious that will appeal to even the biggest detractors of this vegetable.

Wash and dry the zucchini and potatoes well. Grate the zucchini leaving a medium thickness, or use a food processor directly to save time. Place in a colander with a pinch of salt and let the water drain for 15 minutes, squeezing well at the end.

Peel the potatoes and ** grate them to a thickness similar to zucchini **. Put both vegetables in a large bowl, add the egg, tomato paste or chili paste and cheese. Season with a pinch of salt, black pepper, granulated garlic and lemon zest.

Mix well and add a couple of tablespoons of flour with the baking powder. Combine and add a little more flour if necessary, until it has a very moist dough that can be taken in portions. It’s okay if taking the latkes is liquid at the bottom of the bowl, but it shouldn’t be a bathtub either.

Heat a good base of olive oil in a large frying pan or casserole and fry about three pancakes at a time. You simply have to scoop up portions with a large spoon, carefully place them in the hot oil and flatten them slightly with the back. They should be in the shape of an irregular disk. 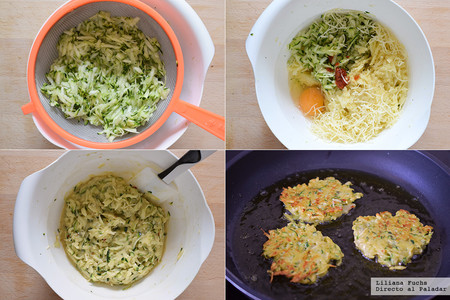 Cook until golden on both sides, about five minutes per side, to taste. Remove to a source with kitchen paper and continue with the rest of the dough. Serve immediately or freeze cold, individually wrapped. Better to iron them later to regain their texture. 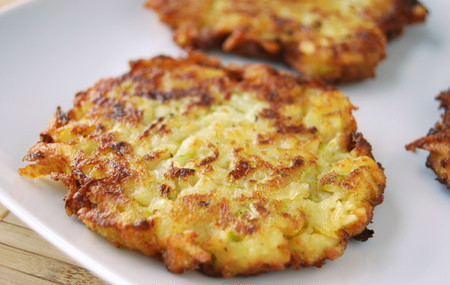 I have cooked latkes at home several times, almost always by eye. With a little experience easy to adjust quantities on the fly, starting with a couple of potatoes, some onion and an egg. I like to use them as a base to play with other vegetables depending on the season, for example with zucchini, carrot, sweet potato or parsnip.

Have you ever tried latkes? Did you know its peculiar history?

Summary and goals of Estoril-Porto (2-3), match of matchday 17

Genshin Impact: what is the Amakumo Fruit and where to find it

EA has started investigations into FIFA 22 for account hacking