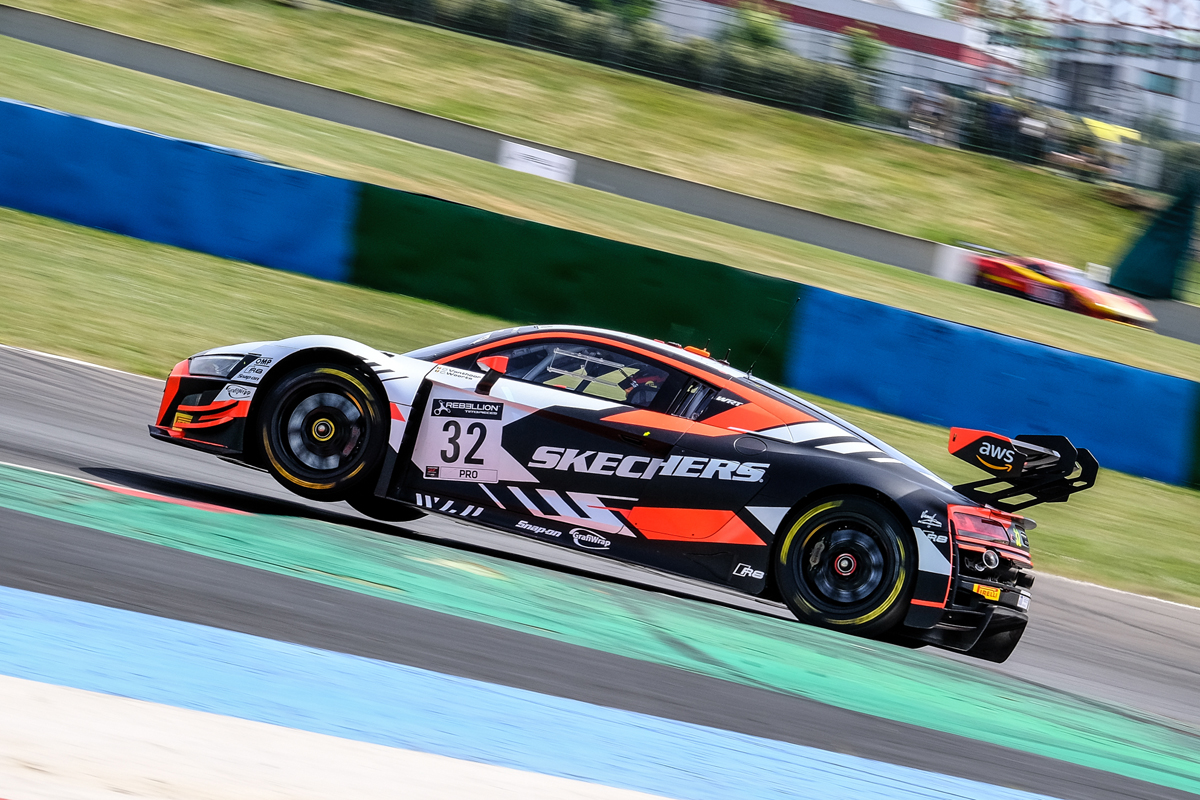 Sprint Cup champions always come back and after hovering around for victory at Brands Hatch, victory has come at Magny-Cours. Charles Weerts and Dries Vanthoor have achieved victory with the #32 Audi in the first heat of the short format competition on the French track after a perfect strategy by Team WRT. For its part, Timur Boguslavskiy and Raffaele Marciello’s #89 Mercedes was second, while the Audi #11 from Car Collection has completed the podium. Victory in the Silver Cup went to the Saintéloc Racing Aud i#26.

Simon Gachet asserted his pole to retain the first position in a strange exit in which Charles Weerts ‘asleep’. The driver of the #32 Audi lost the position to Gilles Magnus, although Audi kept his hat-trick. Behind, Timur Boguslavskiy climbed to fifth place with the #89 Mercedes after beating Thomas Drouet. The exit and the first turns were very clean, which promoted a certain consolidation of the resulting positions after them. Behind, Valentino Rossi did offer a battle and even played with the McLaren #111.

After his initial mistake, Charles Weerts proved to have more pace than Gilles Magnus, to the point of putting pressure on the #26 Audi driver. The Belgian ended up overtaking his compatriot with 42 minutes to go, taking advantage of a small mistake by Magnus at the exit of the second corner. Weerts put the direct and went on the hunt for Simon Gachetsince the Frenchman lived a very calm first third of the race. The pit stop window opened without major news among the leaders.

WRT was betting on a risky strategy and stirred up the hornet’s nest by putting the #32 into the pits first. Pierre-Alexandre Jean followed in Weerts’ footsteps with the #53 Ferrari. The Mercedes #89 also entered, a vehicle in which Raffaele Marciello got on. And one more time, WRT’s decision was correct and the #32 Audi, with Dries Vanthoor at the wheel, took the lead in the race. At the close of the stop window, in another great performance from Akkodis-ASP, Raffaele Marciello was third with the #89 Mercedesfive seconds from Christopher Haase.

With a much higher rate Marciello only needed 15 minutes to reduce to nothing the five seconds that separated him from Haase. The presence of the Spanish Isaac Tutumlu, doubled by the leaders, did not affect a duel that was finally decided just one lap later. Marciello took advantage of the better traction of his Mercedes to account for the Audi #11 and escape, although by then the distance with the leader was already great enough to avoid any kind of fight for the final victory. In fact, Dries Vanthoor’s #32 Audi got the win with some ease.

Raffaele Marciello also secured second place with the #89 Mercedesa very important result in terms of the fight for the Sprint Cup title. For its part, the final third place went to the #11 Audi of Simon Gachet and Christopher Haase. The Audi #25 and #12 closed the ‘top 5’ of a race that offered a nice final duel for sixth place and victory in the Silver Cup. Despite Ulysse de Pauw’s attempts to overtake Nicolas Baert, victory ultimately went to the #26 Audi. For its part, the victory in the Pro-Am Cup has been for the #188 McLaren.