Bullfrag
Home Update We tested the Bread & Co 1500 PerfectCook breadmaker from Cecotec, an... 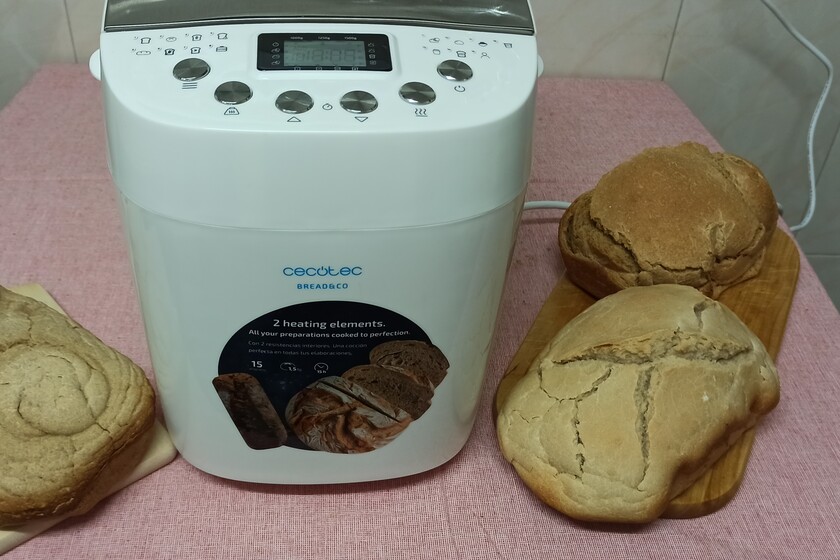 The battle for homemade bread is being fought in the houses among those who bet on making their own bread and those who bet to buy it. Halfway there is a third way, or as I see it, which is the one formed by those who have opted for the world of bakeries.

They are not as thorough as the traditional kneading and baking of artisan bread, but they are a good alternative In the event that we do not have much time to go to buy bread, if we do not feel like monitoring fermentations or, as is my case, to check in the future if we have a budding baker’s soul.

In this case, the Bread & Co 1500 PerfectCook Bakery has been the test bench with which to check if the world of breadmakers is really a alternative to homemade bread or store-bought bread. Everything will depend on what we are used to, of course, and also how much we are willing to spend on bread.

It must also be clear that the bread from the bakery is not the same as the one we make by hand or the one we buy. Although most cookbooks tell us about different versions in the case of the bakery, the reality is that they are all first cousins ​​of sliced ​​bread.

When to bet on a bakery at home

Different ingredients, more or less hard rinds, but in any case they will come out more compact breads, with a lot of crumb, little crust, little or no alveolus and a lot of humidity. You can investigate at will with the quantities, but the cookbooks are marked to the letter so that the proportions do not fail us.

That does not mean that, as in all bakery works of art, change the ingredients and therefore the final result. If we use a battle flour, the taste will not be the same as that of an ecological stone-crushed flour. This is just an example, but it doesn’t have to be taken at face value.

In any case, you have to take into account certain issues (such as those that we already tell you in this bakery buying guide) before launching into a bakery. In my case, I think it is relevant to know that we will have space to store it or to use it, to know how many of us are at home and how much bread we consume.

The Cecotec Bread & Co exists in two formats. One that barely weighs a kilo and is more manageable, which will suit small households, and another much larger and more powerful (5.5 kilos), which is the one we have tested and which offers breads that go from kilo to kilo and half.

As for specifications, it must be said that it measures 26 x 41 x 30 centimeters (length, width and height) and that its power is 850 watts. The advantage over her ‘little sister’ is that features two kneading paddles, which are quite practical even for those who want to use it only as a mixer, and two heating elements, which make the baking of bread more homogeneous. 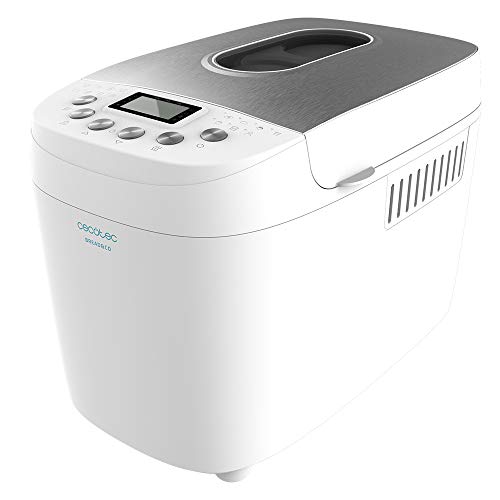 If something stands out once unpacked, it is its construction, even if it is plastic on the outside, the boiler and the interior parts are made of stainless steel and non-stick (so do not hit with scourers or metal spoons) and operation and cleaning are extremely simple.

Just a display with six buttons and a very intuitive control panel where we will select the program (the manual includes 15, from normal bread to gluten-free bread, through pasta doughs, cakes or whole wheat bread), the weight of our piece (also indicated in the recipe book with its quantities) and the degree of toasting that we want.

Once the initial washing instructions are followed and everything is up and running, we don’t have much to worry about. We add the quantities (first liquid, then solid and then the yeast) and we tear off our bread. She alone kneads, lets rise, ferments and then bakes. Although you have to be at the removal of the rising time to extract the kneading paddles there so that they do not leave the shape in the bread.

With these wickers, the bread for dummies it’s easier than ever although not all that glitters is gold, since there are lights and shadows in the results. In our case, we made three breads: a gluten-free one (with gluten-free oatmeal), a ‘baguette’ bread – or so it appeared in the recipe, and a whole wheat bread.

Read:  BonfotonUP turns your room into a camera obscura

All the total times are around four hours, some being slightly shorter, but they oscillate in that range. It is also programmable (with a range of 15 hours), including the activation time and the bread cooking program. It also has another functionality that allows you to keep warm for 60 minutes, so you can start it up at night and have the bread as freshly made when you get up.

Gluten-free bis (gluten-free oatmeal), whole wheat and white wheat flour bread. They are dense and crumby, but can be eaten. The better the flour, the better your bread will be.

The first gluten free bread we tried was an absolute disaster, In addition to the fact that the instructions in the attached recipe book are incorrect (they mentioned including flour high in gluten?

Using gluten-free bakery preparations and cornmeal, what ended up coming out was a monstrosity that I didn’t even take photos of because it seemed that no one bothered to look at the amount of water. Then we did a second test, finishing handballing, and the result was something more like bread but that on a taste level it was an extreme mazacote. 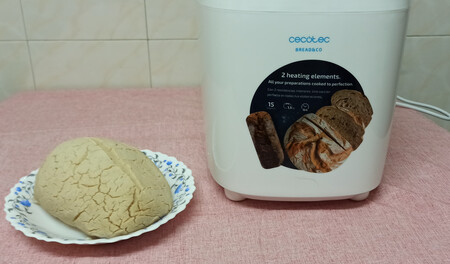 We know from panarra science that gluten-free breads need more hydration – even more so if they are made of corn – than a conventional bread, but someone seemed not to take it into account when preparing the manual. Fortunately, oatmeal performed better and the result offered a bread that could be considered as such.

Regarding whole wheat bread and baguette bread there is no complaint about the final result. They are easily kneaded, we hardly have to pay attention to the bread maker (it also has a heat maintenance mode, which can last up to 15 hours, in case we want the bread toasty warm) and if we see that the dough has not taken the desired shape, always We can take it out of the bread maker and roll it slightly. 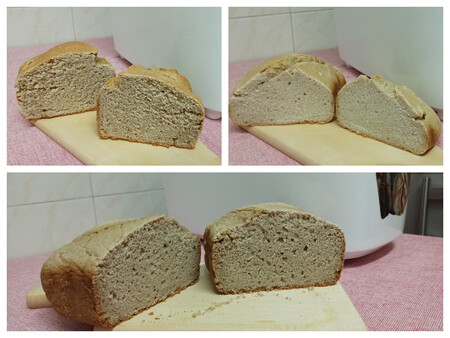 The cuts do not deceive (whole wheat, white bread and gluten-free oatmeal): the dough is dense, very spongy and quite moist.

I repeat that the breads obtained, always following the manual, are closer to sliced ​​breads than a ‘normal’ bread with a more or less thick crust and a crumb with alveolus. Here we are going to come across large loaves, similar to sliced ​​bread in its internal consistency but more dense.

As the amounts stipulated in each recipe are greater than one kilo, we must be clear that this type of bakery only make sense in very large houses or if we are going to freeze the bread after cooking (I recommend letting it rest and when it is cold, slicing it), which is the most logical thing because, although they hold up well for a couple of days wrapped in a cloth, it is more logical to toast or reheat the pieces that have come out of the freezer and thus also take advantage of it to remove part of the Water.

By way of conclusion, I think that the Bread & Co 1500 PerfectCook Bakery has pros and cons. The advantages are that it kneads well, it is easy to wash, allows us to have bread at home in a cheap way (At the end we talk about flour, water, salt, yeast and a pinch of oil) and that surely encourages us to continue entering the bakery world to continue innovating.

Among the negative part you have to talk about Cecotec manuals (one fell apart after turning a few pages and misses some information or better guidance on adding ingredients, and the other directly said that we add high-gluten flour to gluten-free bread), which are still a touchstone of the brand, and that it is quite large for a small house.

Bitcoin’s slide below $ 40,000 comes on the Fed’s signal of a possible fourth interest rate hike in 2022

The Dark Side of Robot Employees: An Employer Who ‘Hired’ Them Explains Why He Prefers Humans | Technology

In the absence of a Silent Hill remake, this demo in Unreal Engine 5 makes us dream of returning to the cursed town

Eternals: In deleted scene Makkari evokes the victory of humanity against Thanos