Bullfrag
Home Science We need supercomputing more than ever if we really want to understand... 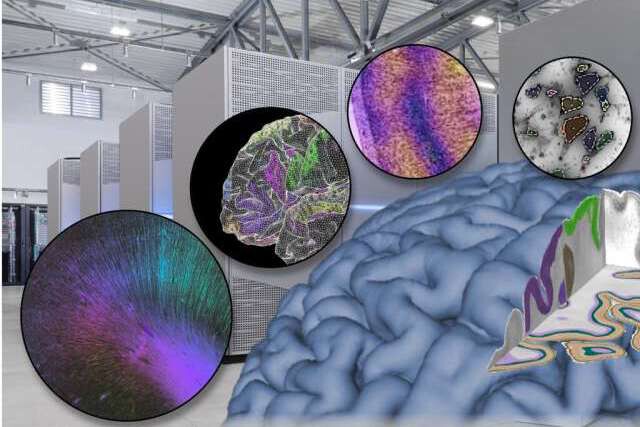 The human brain contains about 86 billion neurons that form trillions of points of contact. Imaging a whole brain at cellular resolutions produces data in the range of several petabytes. Electron microscopy of the whole brain would amount to more than one exabyte of data.

Understanding the brain in all its complexity requires knowledge on multiple scales, from genomics, cells, and synapses to the level of the entire organ. This means working with large amounts of data, and supercomputing is becoming an indispensable tool to achieve this.

New advances in neuroscience demand high-performance computing technology and, ultimately, they will need computing power on an exascale, as they refer in the last issue of Science brain scientist Katrin Amunts and supercomputing expert Thomas Lippert.

In Europe, the neuroscience big data challenge is addressed by the research infrastructure EBRAINS of the Human Brain Project, which provides a range of computing tools, data and services to brain researchers. This includes access to supercomputing systems through Fenix’s federated infrastructure, which has been established by Europe’s leading supercomputing centers as part of the Human Brain Project and will serve communities beyond brain research.

In the next five years, Europe aims to deploy its first two exa-scale supercomputers. They will be acquired by the European High Performance Computing Joint Undertaking (EuroHPC JU), a joint initiative between the EU, European countries and private partners. Exascale computing refers to computer systems capable of performing a minimum of 1 exaflop (10 to the 18th power) or floating point operations per second. This capacity represents an improvement a thousand times higher than the first petascale equipment that went into operation in 2008.

Read:  This newly discovered plant is so rare that only one of its kind has been found so far

Studies show that these systems are 1000 times faster than current HPC systems, so they can perform a trillion calculations per second. That is, the exascale will provide a very noticeable increase in computing power. The computing power of the exascale will also allow, according to the researchers, to explore new projects in fields such as cosmological simulations, to discover new drugs or materials for the creation of more efficient organic solar cells.

Upon completion of the project, Aurora will become the first supercomputer capable of performing calculations of at least one exaflops or one quintillion (ie 1,000,000,000,000,000,000) per second. It will eventually arrive throughout the year 2022.

What are the top-earning TikTokers in the world?

How and where to watch ‘Spider-Man: No Way Home’ online

Email, mail and other options

Bitcoin’s slide below $ 40,000 comes on the Fed’s signal of a possible fourth interest rate hike in 2022