We discovered a very New York loft, in the Malasaña neighborhood of Madrid

By HarleyKaiaApril 26, 2022No Comments5 Mins Read 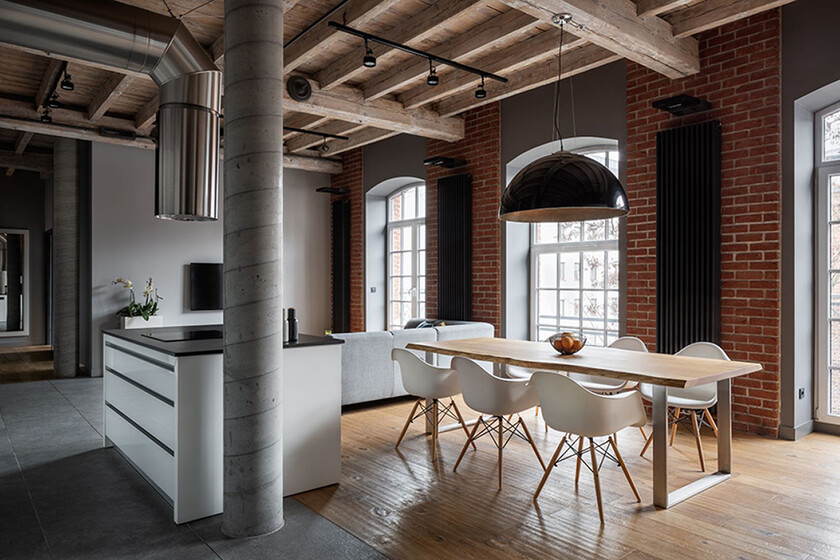 in malasanaone of the most dynamic and cosmopolitan neighborhoods of the Madrid capital, hides this loft that has nothing to send to the New Yorkers from whom we imported the concept and the idea of ​​transforming factories or industrial pavilions into homes.

This is what they have done in the study of RQH Studio headed by interior designer Rober Quiñones-Her. The space draws attention for its high ceilings (more than three meters) and large windows. The reminiscences of New York were already there, because the building used to house an old factory in the neighborhood, but Rober Quiñones went further maximizing this aesthetic with the choice of each piece and material.

Before the reform, its 140 m2 were totally diaphanous. The work focused on determining a distribution and its design and everything could be done in just two months.

The only thing that was originally in the house and that it was decided not only to maintain, but to extol, were the exposed brick wall, the beamed ceiling and the oak wood floor. This particular and attractive envelope marked the entire aesthetics of the project. The base of the wood on the beams and on the floor provides the warmth that the owners requested, minimizing the cold touch of the predominant industrial style.

The natural wood flooring was treated to restore the charm of its original texture and grain to the oak. Only in the bathroom and in the kitchen area was it chosen to install a porcelain tile, much more appropriate for humid areas. The exposed brick wall that runs along the entire interior of the façade, integrating in each of the rooms in which the house was distributed.

Index hide
1 a new distribution
2 The entrance, kitchen, dining room and living room share the same space
3 The bedroom
4 The bathroom
5 It has inspired us:

The 140 m2 of this loft They were divided into three rooms. Its distribution was conditioned by the five large windows, so that the three stipulated stays; living room/dining room/kitchen, bedroom and bathroom, have natural light.

In fact, in the common area, we opted for do not dress the windows, precisely to maximize natural light. The access to the house connects directly with the main space of the house that houses the living room, kitchen and dining room in the same environment. This open space that already reveals the original and surprising elements of the house, generates a surprise effect to everyone who visits it.

The white kitchen is a custom design for the studio consisting of a high wall that houses the water area and most paneled appliances and an island with a black silestone countertop where the cooking area is located and a bar-type space with two designer stools. The industrial-type hood suspended over the stoves that continues with the exposed extraction tube, enhancing the loft style.

The dining room is dominated by a recovered wood table that simulates tree bark. Next to it, in the wall, a hole has been used to place a cabinet to match the kitchen. The white color of the different elements acts as a common thread in this area, while at the same time bringing light to the whole where gray tones predominate.

The back of the chaise longue sofa acts as a separator and zones the space intended for the living room itself. Gray is present throughout the house. In this room, it has been chosen on the walls and on the porcelain floor of the kitchen that leads to the corridor.

The bedroom follows the same aesthetic line as the main room in the loft, taking into account that they share elements such as the floor, the ceiling and the brick wall. In this environment the furniture has been reduced to the essential minimum. Gray is once again the protagonist and is found on walls, textiles and other elements such as the headboard with a concrete finish, also made to measure. In the bedroom, the use of gray enhances the feeling of recollection that is sought for a good rest.

The only chromatic license that has been allowed on the floor has been the cushions, in blue and ocher, to match the painting. Here the curtain has a very theatrical effect due to its height and its fall.

The single bathroom It has the same ceiling height as the rest of the house, which is unusual and unexpected. This, together with the size of the window and the brick wall, mark the design of a room for which the same has been chosen. gray porcelain flooring than in the kitchen, although in a different format.

On the wall on which the double washbasin rests, RQH Studio created an overlapping wall with a concrete finish, (the same as the headboard in the bedroom), which further reinforces the loft style.

In this environment, the warmth of the wooden sink cabinet of iroko with gloss varnish and the free-standing bathtub that turns the bathroom into a real relaxation space.

Black suspension lamp 50 cm in diameter black and with a gold interior, similar to the one in the dining room on Amazon for 113.67 euros

And a pair of Eames-style dining chairs for 109.90 euros

Similar in Decosphere | The storage and use of wood, keys in the comprehensive reform of this single-family home in Navarra

A lemon tree, two patios and a terrace in this semi-detached house in Valencia

Former Alameda CEO Caroline Ellison has been seen in New York, according to Twitter users

the day New York banned artichokes to fight the mafia