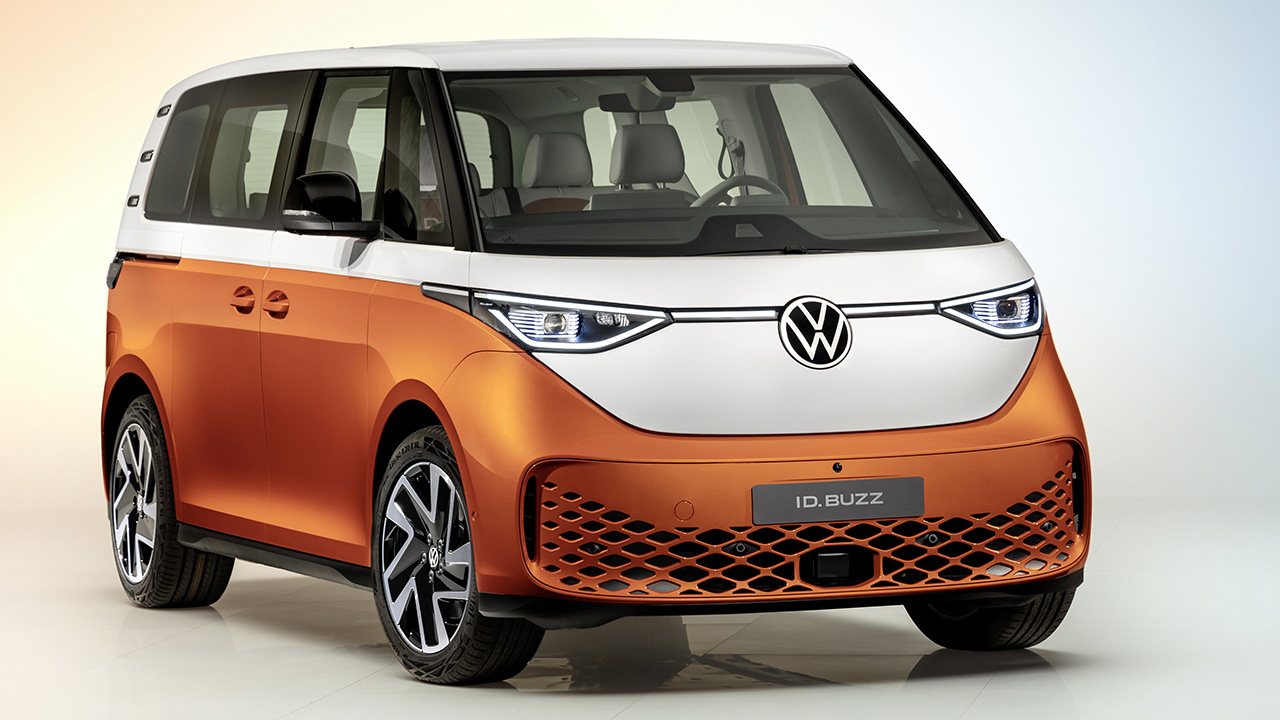 The new Volkswagen ID. Buzz has been presented in society. Volkswagen reinvents the iconic Bulli transforming it into a 100% electric van loaded with technology and solutions to deal with the times. A model available for both passenger and freight transport, the Volkswagen ID. Buzz Cargo.

volkswagen has presented its new and long-awaited electric vehicle to society. The wait is over. The Volkswagen ID. Buzz has burst onto the scene loaded with important news. A model that joins the ranks of the growing ID family. of battery electric vehicles. This is a van that seeks to reinterpret the iconic and classic Bulli to adapt it to the new times. Times marked by electrification.

The new ID. Buzz has been unveiled both in a passenger version, which we will discuss in detail in this article, and in a commercial variant, the new Volkswagen ID. Buzz Cargo. Both models boast an exterior design, technological equipment and, above all, a 100% electric propulsion system.

The exterior design of the new Volkswagen ID. Buzz

Just take a quick look at the images to discover the most characteristic features of the new ID. Buzz. To all the aesthetic details that it keeps in common with the rest of the members of the ID. of electric vehicles we must add the characteristics that are intended to reinvent the Volkswagen T1. The iconic Bulli. We must also keep in mind that much of the design of the production vehicle was advanced a few years ago through a concept car.

On the front of the new ID. Buzz highlights the optical groups with LED technology. In the superior version, some LED Matrix IQ.LIGHJT headlights. The light bar crosses the front to connect with the Volkswagen logo. The lateral view brings out the original essence of this model. A model that on a visual level also maintains certain ties with the new Volkswagen Multivan.

Finishing our tour of the exterior at the rear, the main element to highlight is, without a doubt, some pilots in horizontal arrangement, very thin and that also make use of LED technology. In addition, they are connected by a light strip, which helps to enhance the sense of width of the vehicle.

The interior and technology of the new Volkswagen ID. Buzz

Leaving aside the outside, if we go into the inside the new ID. Buzz we will quickly be enveloped by a modern environment. The passenger version of this van has a total of five seats. However, other versions with six and seven seats will be added to the range later alongside the extended wheelbase body variant. The driver and passenger have individual seats. Some seats that can have electrical adjustments and memory and massage function.

The range of adjustment of the front seats is wide since it reaches 245 mm in length and 61.5 mm in height. The second row is made up of a three-seater seat with a distribution of 1/3 to 2/3 that can be moved longitudinally a maximum distance of 150 mm.

Volkswagen has placed special emphasis on finishes and adjustments. Recycled materials are protagonists. In addition, there is a significant amount of customization options. Mistral interior moldings add a color bonus to the environment. By the way, the ambient lighting system also helps.

Being built on the SEM platform of the Volkswagen Group, designers have been able to create a spacious cabin without compromising the vehicle’s exterior dimensions. It is important to remember that this architecture is specific to battery electric vehicles.

The measurements of the new Volkswagen ID. Buzz

Once settled in the driving position we will find a digital environment. The “nerve center” of the passenger compartment is a 10 inch touch screen. A key component to driving the Ready 2 Discover Max infotainment system. Optionally, you can opt for the system of Discover Pro navigation with a 12-inch screen respectively. You also have to add the Volkswagen Digital Cockpit digital instrument cluster 10 inch

The list of driving assistance systems it is equally wide. Among other technologies the new ID. Buzz can boast of having the latest version of Travel Assist. Cruise control with limiter, fatigue detection system, braking assistant to avoid collisions, involuntary lane departure warning, traffic sign recognition and Park Pilot with maneuver braking function are some of the functions available.

The electric drive system of the new Volkswagen ID. Buzz

In the first commercial stage of the new ID. Buzz, as well as its commercial variant, will be available a single engine. In the bowels of this casual van will be a lithium-ion battery of 82 kWh (77 kWh net) whose main objective will be to feed a single electric motor of 150 kW (204 hp) and 310 Nm of maximum torque.

The vehicle has a rear-wheel drive configuration since the electric motor is integrated into the rear axle. The top speed is electronically limited to 145 km/h. Unfortunately Volkswagen has not provided the autonomy data. Something essential as it is a 100% electric vehicle. It has confirmed that it will be announced later and that to face the winter, among the available equipment there will be a heat pump to maximize efficiency.

The loading times
will vary depending on the outlet used. In a DC fast charging station the new ID. Buzz can get power at a power of 170 kW. In such a case, the battery will recharge from 5 to 80% in just 30 minutes. You can also use an 11 kW alternating current charging point. The new ID. Buzz will also arrive at dealerships with vehicle-to-home technology, which will allow you to inject the electricity you do not need into the home network. A technology available through system updates, as well as the function of Plug&Charge smart charging through which the vehicle is automatically identified with the charging point.

Release date and prices of the new Volkswagen ID. Buzz

Advance sales will start in selected countries next May and the official commercial launch will take place in the third quarter of 2022. As soon as its arrival approaches, the rest of the data will be revealed. Among them, the prices. By 2023, other versions of batteries with different power levels are expected to be introduced.