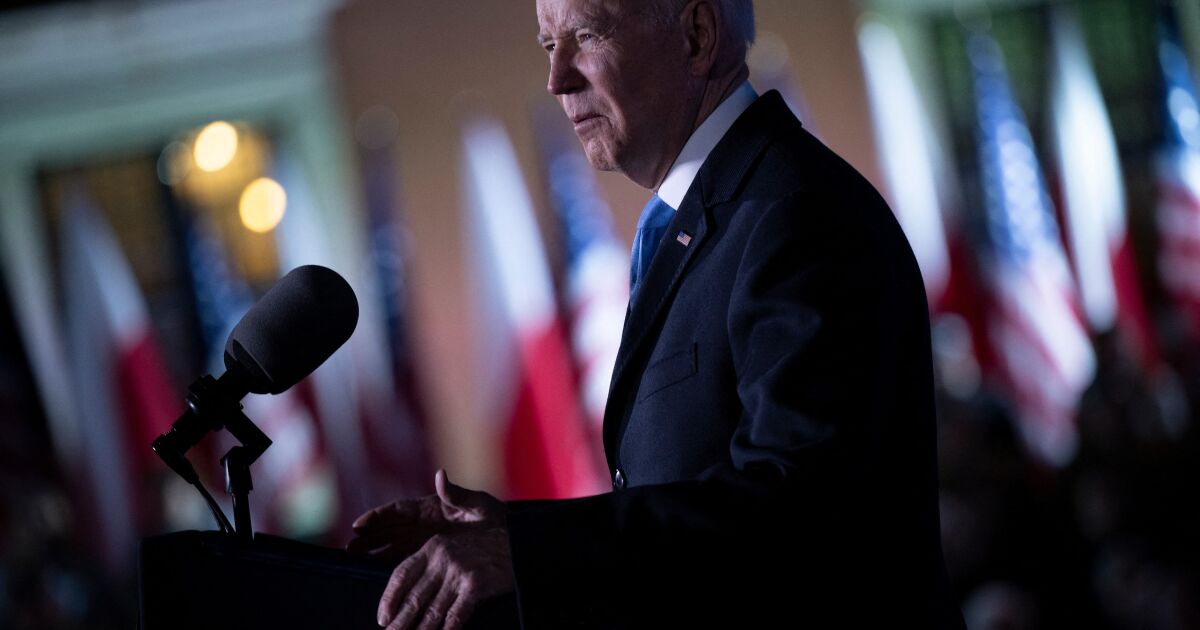 In a major speech delivered at the Royal Castle in Warsaw, Biden evoked Poland’s four decades behind the Iron Curtain in an effort to argue that the world’s democracies must urgently confront an autocratic Russia as a threat to security and freedom. global.

But a comment at the end of the speech raised the specter of an escalation by Washington, which has avoided direct military involvement in Ukraine and has specifically said it does not support regime change.

“For God’s sake, this man cannot stay in power,” Biden told a crowd in Warsaw after condemning the Ukraine war, a month since the start of the Russian invasion.

A White House official said Biden’s comments did not represent a change in Washington policy.

“The president’s point was that Putin cannot be allowed to wield power over his neighbors or the region,” the official said. “He was not discussing Putin’s power in Russia, or regime change,” he maintained.

Asked about Biden’s comment, Kremlin spokesman Dmitry Peskov told Reuters: “That is not for Biden to decide. The president of Russia is chosen by the Russians.”

Calling opposition to Putin a “new battle for freedom,” Biden said the Russian president’s desire for “absolute power” has resulted in a strategic failure for Russia and a direct challenge to European peace, which has prevailed largely since World War II.

“The West is stronger now, more united than ever,” Biden said. “This battle will also not be won in days or months. We need to steel ourselves for the long fight ahead.”

The speech came after three days of meetings in Europe with the G7, the European Council and NATO allies, and took place at around the same time rockets rained down on the western Ukrainian city of Lviv in only 60 kilometers from the border with Poland.

“Your courageous resistance is part of a larger fight for the essential democratic principles that bind all free people together,” Biden said. “We are with you. Period.”

In his speech, Biden said that NATO is a defensive security alliance that has never sought the demise of Russia and reiterated that the West does not wish to harm the Russian people, even as its sanctions threaten to cripple their economy.

Poland was under communist rule for four decades until 1989 and was a member of the Moscow-led Warsaw Pact security alliance. It is now part of the European Union and NATO.

The rise of right-wing populism in Poland in recent years has brought it into conflict with the EU and Washington, but fears of Russia pushing beyond its borders have brought Poland closer to its Western allies.

Speaking to a crowd holding flags from the United States, Poland and Ukraine, Biden said the West is acting in unison because of the “seriousness of the threat” to world peace.

“The battle for democracy could not and did not end with the end of the Cold War,” Biden said. “Over the last 30 years, the forces of autocracy have been revived all over the world.”

The reaction was mixed in Warsaw. Mykyta Hub, a Ukrainian from Dnipro who has lived in Poland for several years, called the speech “very common”: “Lots of words, little action.”

Pawel Sterninski, who traveled nearly three hours to Warsaw from elsewhere in Poland to hear from Biden, arrived draped in an American flag.

“The United States can’t really get involved militarily because that could result in a third world war. Putin is unpredictable. If you’re threatening nuclear weapons, it takes just a moment to turn into a global conflict.”

Earlier in the day, Biden appeared at a meeting with Ukraine’s foreign and defense ministers and made additional unspecified security promises on developing defense cooperation, according to Ukrainian Foreign Minister Dmytro. Kuleba.

In Warsaw, Biden also visited a refugee reception center at the national stadium. More than 2 million people have fled the war to Poland. In all, some 3.8 million have left Ukraine since the fighting began.