“Viva Engage” the new Microsoft platform; a copy of Facebook 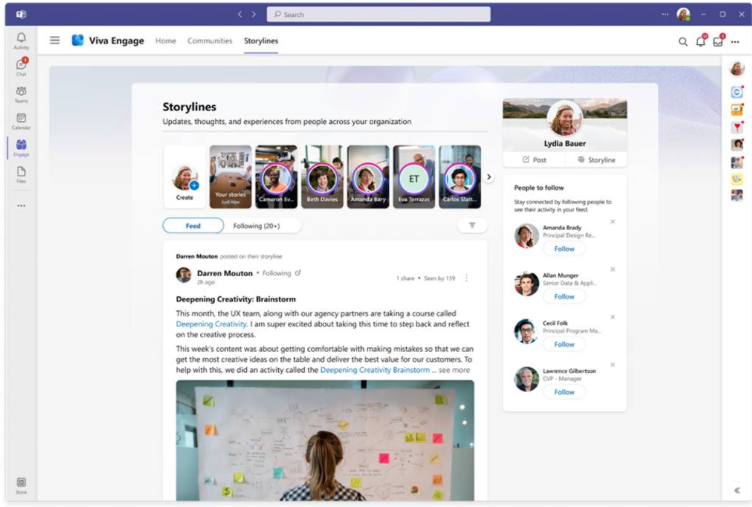 Technological companies know the power that social networks have today, which is why many have already launched their own. That is the case of Microsoft, which recently announced its platform “Viva Engage“, which is very similar to Facebook in its Teams portal.

With the arrival of the Covid-19 pandemic, many platforms have arrived that provide good business communication, such as Microsoft Teams, which according to Business of Apps datathe number of daily active users of this platform almost doubled last year, increasing from 75 million users in April 2020 to 145 million as of the second quarter of 2021.

Likewise, the report details that more than 270 million people used shopping mode Microsoft Teams as of January 2022, becoming the most popular business communication service in the world. Although in this digital industry there are other tools such as Zoom or Slack that are also widely used.

With the aim of continuing to advance in this market, Microsoft launched Viva Engagea platform within Teams that aims to promote the use of social networks within companies globally.

According to the company, Viva Engage is built on the foundation of yammer and will seek to provide a company’s leaders with a new way to shape the culture of their organizations.

Likewise, it mimics various functions present in many social networks, such as the story sections and also allows users to have conversations through text, image or video. As well as this new platform, employees who use the application will be able to share news of interest and make their interests public.

Read:  Microsoft launches its own "Mac mini" to develop apps on ARM

Microsoft indicated that the platform will be available in the Teams mobile applications for iOS and Android, as well as for Microsoft 365 customers at no additional charge, although they emphasize that you must have a Yammer license to use it.

Last month, the messaging platform said it had implemented further improvements to the voice quality of calls, powered by Artificial Intelligence, after many of its users had at some point been on a call where someone had poor acoustics. that makes it hard to hear them, so AI will help fix these glitches.

Just as Microsoft is making changes to its digital platforms, which according to a study by We Are Social and Hootsuite, there are approximately 3 billion Internet users who use them; is Facebook that launched this Thursday a redesign in its application for iOS and Android, which will allow filtering publications in a new tab.

As another example is Twitter, which also announced in recent days a new function dedicated to users who do not want to participate in uncomfortable conversations or who, in some way, threaten their mental health. Or Telegram, which launched its Premium platform, as the new section of the social network, which costs $4.99 per month (about 83.55 Mexican pesos).

In conclusion, technology continues to grow today with the sole purpose of helping people in their day-to-day activities, such as the effective communication that is obtained in social networks.

These are the features that will disappear from Microsoft Teams