By NicolasAugust 11, 2022No Comments3 Mins Read 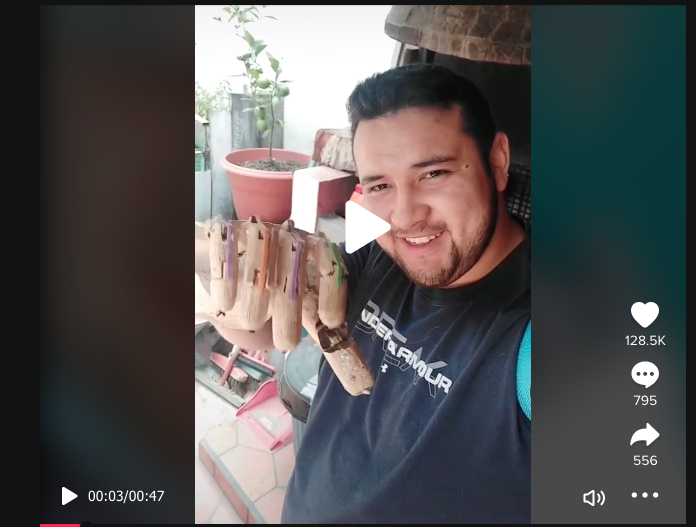 All people face adversity, but the most important thing is the way they face the challenges of life. While some stay on the ground, others get up instantly and even seek to be the inspiration for others. Such is the case of a young Mexican who lost one of his hands but it served as motivation to design his own wooden prosthesis.

In this case we refer to Paco El Morlaco, who in recent months has achieved exponential growth in social networks. His life was ordinary like that of any other person until an accident caused him to lose his right hand.

From that moment his life took a radical turn. Naturally, he saw a decrease in the possibility of fulfilling all daily activities. But unlike most, he decided to turn this adversity into an opportunity.

Based on your knowledge in engineering had the idea of ​​building his own hand prosthesis and chose wood as material. The reason was because it is quite cheap and can even be the origin of a series to help low-income families who have a person with an upper limb amputation.

Despite being cheap, Paco had the idea of ​​asking other people for support to carry out this project. To achieve this, he used the power of social networks and in the end he managed to achieve his goal.

Read:  Aqualad will come to a series from the hand of Charlize Theron

In this case he resorted to request donations and ask for the support of renowned organizations and personalities. In addition, he also received financial contributions from anyone who wanted to join his work.

He also made a TikTok video where he summarizes all the steps for the construction of the wooden prosthesis. It all started with a design on paper and then focused on the five fingers with each of their phalanges. The next step was to insert them into a table and place some cables to allow their mobility.

♬ Love You So – The King Khan & BBQ Show

Now, the young man has stated that this idea is cheap to replicate and has some drawbacks. Especially since wood is stiff but can break easily.

For the above, now your next goal is to create a metal prototype. He plans to use materials such as grilon and aluminum because they are strong and cheap. Meanwhile, the prototype of the prosthetic hand made of wood has been a good start and shows that all adversities can be overcome.

IMSS ambulance ran over a man in Mexico City