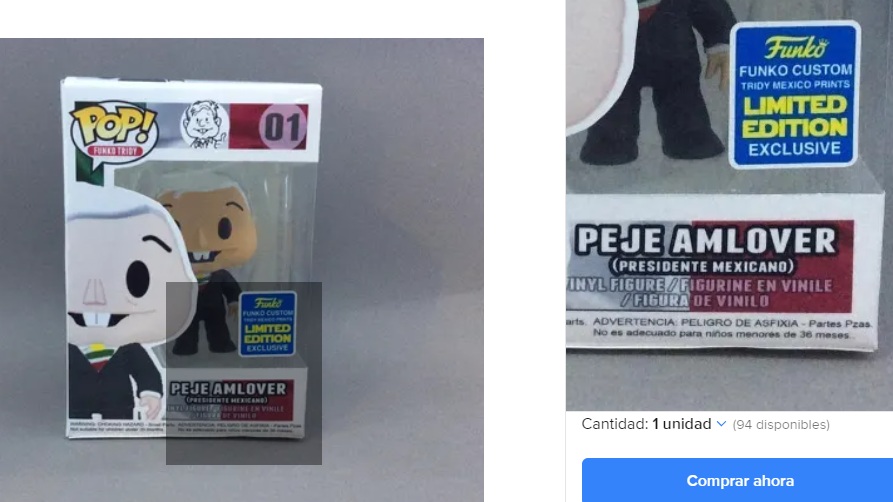 Through social networks, different versions of a Funko Pop by AMLO have gone viral. The collectible figures of President Andrés Manuel López Obrador are not official, but they have generated great conversation around the subject.

In fact, on some platforms, such as Mercado Libre, the figures are for sale with promotional prices for Black Friday.

However, in the last few hours new versions have emerged.

To the “original” model with the presidential sash, other Funko were added where AMLO wears his traditional gray suit and holds a series of papers in his hands.

Another unofficial AMLO collectible is based on one of his cartoons, there you can see his white hair and a smile with two teeth that stand out conspicuously.

That version, for example, is on sale at Free market for just over 1,000 pesos, although because it is on sale on black friday, it can be purchased for only 990 pesos.

The post says they are made by a 3D printing and design studio. They are creations of the “work of graphic designers, 3D modelers and painters who are in charge of giving life to many ideas that the official brand fails to launch,” says the text that accompanies the sale page. He says that “it is a handcrafted work with a lot of affection” and clarifies that “it is not official of the brand”, but that it is “a great option for collectors”.

Read:  Everything that fails you in networks, will change with Community Managers Online

The material: plastic and resin.

In general, all versions of AMLO collectibles are sold between 550 and 1,000 pesos, although they vary depending on the means by which they are purchased, whether it is Marketplace (from Facebook) and e-commerce platforms.

Most Wanted Funko Pop (besides AMLO)

In Google Trends you can see that in Mexico, the most sought after Funko Pop collectible figures are not those of AMLO, of course.

According to the data of the last 30 days, and hours of Blackfriday, the greatest interest points to BTS and Spiderman.

The search for “Funko pop spiderman” had an 80 percent increase, as did the phrase “funko pop bts.”