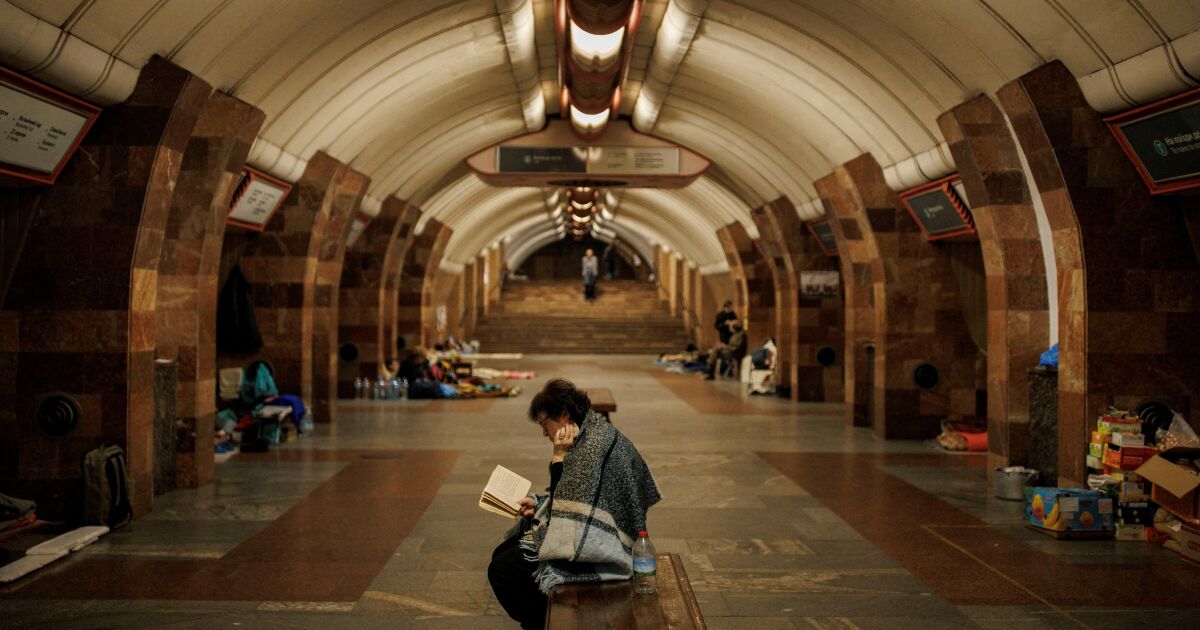 The leader of the pro-Russian Donetsk separatists, Denis Pushlin, claimed on Monday that his troops had conquered the entire port area of ​​Mariupol. “As for the port of Mariupol, it is already under our control,” he said live on Russian television channel Pervy Kanal. For his part, Oleksii Arestovich, an adviser to Ukrainian President Volodimir Zelensky, admitted on YouTube on Sunday that “now it is militarily impossible” to liberate Mariupol.

“Humanitarian Hell” Zelensky said in a video message to the South Korean National Assembly on Monday that Russia had “completely destroyed” the city and he feared “tens of thousands of people” had perished there. “It was a city of half a million people. The occupants besieged it and did not even allow it to take food and water. The Russians totally destroyed Mariupol and burned it to ashes,” he said. After revising its plans and withdrawing its troops from the kyiv region and northern Ukraine, Moscow is now aiming to completely conquer Donbas, a region partly controlled by pro-Russian separatist forces since 2014. Analysts believe that Putin, faced with the fierce Ukrainian resistance, wants to secure a victory in this region before the May 9 military parade in Red Square, which marks the Soviet victory over the Nazis.
Read:  80% of NFTs are fraud. Not us, but the leading NFT trading platform

“The battle for Donbas will last several days,” Sergei Gaidai, governor of the Lugansk region in Donbas, warned on Facebook, again calling on civilians to leave the area. According to him, “the Mariupol scenario can be repeated in the Luhansk region.” On Friday, a Russian missile attack outside the Kramatorsk station in the east killed 57 people, including at least five children. While the population tries to flee this region, air strikes and bombings continue elsewhere, such as those on Sunday in Kharkiv (east), Ukraine’s second largest city, and its suburbs, which left at least 11 dead, including a 7-year-old boy, and 14 injured, according to regional authorities.

More than 1,200 corpses Austrian Chancellor Nehammer’s office sent out a statement to say that the meeting with Putin at his Moscow residence lasted an hour. Nehammer stated that the conversation between the two was “direct, open and hard”. “I mentioned the serious war crimes in Bucha and other locations and stressed that those responsible must be brought to justice,” he said. About 300 people were buried there in mass graves, according to Ukrainian authorities, who blame the Russians. Moscow denies it and denounces a “manipulation”. In several towns near kyiv, which were occupied for weeks by the Russian army, the search for bodies continues.

“To date, we have 1,222 dead people in the kyiv region alone,” Ukraine’s Prosecutor General Irina Venediktova told Britain’s Sky News channel on Sunday, though she did not specify whether the bodies were only civilians. She also reported that there are 5,600 open investigations for alleged war crimes, including the deaths in Bucha.

More companies depart from Russia Volodimir Zelensky called on Westerners to “follow the example of the United Kingdom,” whose Prime Minister Boris Johnson paid a surprise visit to Ukraine on Saturday, calling on them to impose “a total embargo on Russian hydrocarbons.” Meeting in Luxembourg, the foreign ministers of the European Union (EU) studied on Monday a sixth package of sanctions against Moscow, which, however, will not affect purchases of oil and gas. The war in Ukraine could cut global trade growth in half, according to an analysis published by the World Trade Organization (WTO) Secretariat. The crisis should push global GDP growth to between 3.1% and 3.7% this year, while world trade growth should be between 2.4% and 3%. In October, the WTO had forecast an increase of 4.7%. The exodus of Western companies from Russia continues. This Monday, the French bank Societé Générale joined the list of companies that announced the cessation of their activities in the country since the invasion of Ukraine. A few hours later, the Swedish telecommunications equipment manufacturer Ericsson announced that it was suspending its activities in Russia, where it supplies two of the main mobile phone operators. Russia and Ukraine represent less than 2% of its turnover.]]>