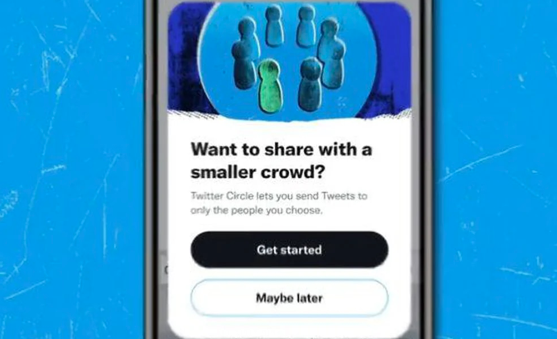 Twitter continues to surprise everyone after Elon Musk will buy a large part of the shares of the social network. This time the digital platform bets on Give your users the ability to choose who can see and interact with your content so you’re introducing them with your new “Best Friends” ‘Twitter Circle’ tool and feature.

According to data from Statista, Twitter registered in 2021, revenues that amounted to more than 5 billion US dollars and lThe company incurred a net loss of US$221 million.

With its Twitter Circle tool, Musk’s new company seeks to view and interact with his content, so it launched this feature similar to Instagram’s ‘best friends’.

The tool aims to share posts with those closest or most trusted to have more intimate conversations and build closer connections with a smaller audience.

The company also explains that the tool allows a user to select which accounts can view and interact with a tweet or post.

So for this, the user first has to create a list of up to 150 people and choose who they want to share the publication with before sending it; yes with all his followers, Or with those around you.

As also in this new tool, Twitter also does not allow the accounts that are part of this small group to retweet or share content, but they can reply to tweets.

The user who created the list can modify it at any time and remove/add members without being notified.

The company revealed that this new tool is currently being tested for various users around the world, and it can be configured both in the iOS and Android apps, as well as through the web version.

Given this, the social network hopes that Twitter circles can prevent users from having to change their account settings to public or private every time they want a tweet to have more reach.

Recall that as recently as early April 2022, tech billionaire and prolific Twitter user Elon Musk made headlines by revealing his recent acquisition of a 9.1 percent stake in Twitter, worth nearly $3,000. million US dollars, making him the largest shareholder in the company. At the end of April, after a shocking offer, Twitter’s board has agreed to sell the company to Musk for US$44 billion, pending shareholder approval.

The South African tycoon has been highlighting in all the media that with this acquisition he wants the platform to support the principles of freedom of expression for which it seeks to make changes to the platformsuch as changes to current regulations, open source algorithms, and the eradication of fake accounts.

There are many digital platforms that have been updating and launching new features to improve the experience of their users, as has been done by Telegram, which recently announced that it is working on new monetization tools for the platform, by implementing a series of reactions and exclusive stickers.

As well as the instant messaging platform WhatsApp said it is working on a feature where users They will be able to react with emojis in the states, something similar to what happens with Instagram stories.

“If you can measure TikTok campaigns, you have to understand their performance”: Nielsen

This hack promises to increase your success on social networks