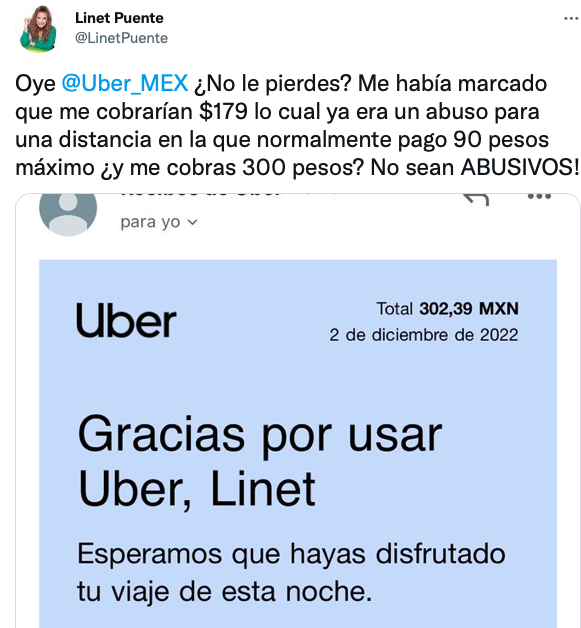 Consumer complaints abound on social media. This Saturday the host of TV Azteca, Linet Puente, exploded on her Twitter account against Uber, for increasing the cost of the rate that marked her trip at the time of collection.

The popularity of Uber in many countries of the world is indisputable, that is why according to company data generated about US$17.5 billion in net revenue in 2021. The report explains that the mobile transport network company has about 93 million monthly users worldwide and is available in 69 countries and more than 900 cities.

In that sense, the costs of Uber may vary depending on where in the world they use it. A study conducted by NetCredit revealed that New York is the most expensive city to travel to in the United States.

For its part, the report also revealed that the countries in the world where Uber trips are the most expensive are Switzerland, followed by Oslo, Norway, Tokyo, Japan, Paris, France and Dublin, Ireland.

Through her Twitter account, the journalist and host of Azteca news and Ventaneando shared her complaint against the travel platform Uber.

According to what was mentioned by the public figure in his Twitter account, the application marked the cost of a trip of 179 Mexican pesos, and when it was time to do it and finish it, it charged him 300 pesos.

Hears @Uber_MEX Don’t you lose him? He had told me that they would charge me $179, which was already an abuse for a distance in which I normally pay a maximum of 90 pesos, and you charge me 300 pesos? Don’t be ABUSIVE! pic.twitter.com/HXYDTZRpQS

Given this, the communicator decided to denounce what she called “abuse” on her account, where she has more than 200,000 followers.

Read:  These are the social networks that will stay in Russia; what will happen to Facebook?

In this sense, and after his complaint, other Internet users and users of the application shared some similar experiences, denounced the application for the increase in rates.

“Yesterday the same guy canceled me 3 times and we checked what he was waiting for the rate to go up. From 100 it went up to 160, then I no longer cancel and then I report it and cancel. @Uber_MEX wanted to charge me $25 for canceling him. Hahaha Bad every day more “, says one of the comments.

For their part, others recommended filing a complaint with the Federal Consumer Attorney’s Office (Profeco), “@Profeco and @SCT_mx, shouldn’t they stop and regulate these platforms like @Uber_MEX and @DiDi_Mexico?! It’s always the same song!!! They are super abusive and ah! When they want to put them in order they get very angry and unruly in the streets!!! They are ASCO!!!”, says another comment.

“That’s why I already canceled my taxi account on the platforms, there is a lot of demand for your service and a lot of abuse and mistreatment of the user for the same reason, there are other ways to travel, look for acquaintances or taxis from somewhere,” wrote another.

“It happened to me as soon as I left Corona Capital, I marked 250 to my house and to finish it the hungry man marked that he had already arrived when he had barely completed a past trip and he was not even close to picking me up,” read another comment.

To date, the journalist’s tweet has not been responded to by the Uber customer service account. Likewise, the Merca2.0 team requested the brand position from the transport platform and until the closing of this note they have not responded.

It is not the first time that a consumer goes to social networks to show their bad experience with a brand, because in the week of the Good End, there were many registered complaints where names such as Walmart, Bodega Aurrerá and Elektra stand out.

Always yes? Didi and Uber will formalize partners, but in a “flexible” way

Uber Files: what the documents that destroy the company’s image say