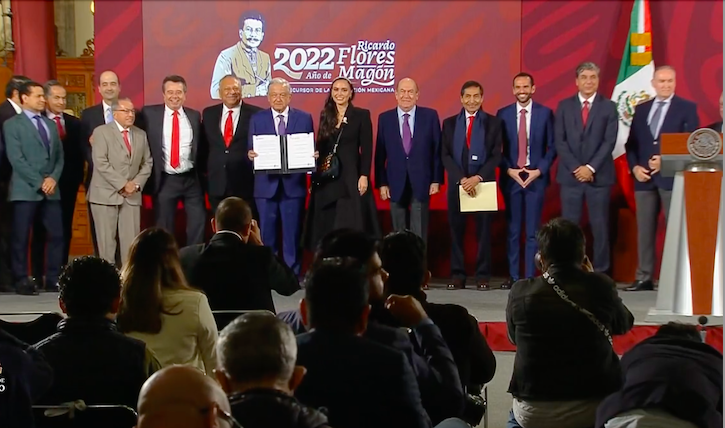 President Andrés Manuel López Obrador (AMLO) presented this morning an alliance in which, voluntarily and without pressure from the Mexican government, 15 leaders of food and distribution companies signed as part of the second part of the Pacic, the plan anti-inflation that seeks to put a brake on the rise in prices of the products of the basic basket.

According to the federal President, the representatives of the Private Initiative joined the new agreement against inflation and famine “for the will to help”, where the Secretary of Finance and Public Credit, Rogelio Ramírez de la O, set the bases of a containment policy that seeks that 24 basic necessities have an 8 percent reduction in their price.

And it is that currently the 24 products of the basic basket have a cost of 1,129 pesos and what is sought with this agreement is that, at least, it is capped at 1,030 pesos.

This, since food continues to be the first to see the consequences of inflation reflected, with an annual growth of 14.39 percent in the first fortnight of September, a figure that exceeded the historical maximum of 23 years, when the inflationary index reached 14.75 percent in August 1999.

According to the National Institute of Statistics and Geography (inegi), in the last report it was possible to observe that processed foods had an increase of 13.27 percent, while agricultural products generated directly in the field registered 15.23 percent more than last year.

AMLO’s Pacic 2.0: support from companies and positivity in the face of inflation

“This is a very important act because it has to do with the consumption of basic foods for the people. It is really very important that this agreement has been signed and that it be by consensus. There is no imposition, there is no coercive measure,” AMLO explained to the businessmen.

A) Yes, The main commercial distributors and leaders of industries dedicated to tuna, tortillas, eggs, chicken, vegetables and beef or pork meat will receive a universal license that exempts them from procedures and permits, both sanitary and phytosanitary, as well as the tax general importation of food or supplies for the elaboration of its products.

This means that, during the validity of this agreement, the review and procedures that make food imports more expensive for these 15 companies will be suspended, in addition to temporarily suspending the export of white corn, beans, sardines and aluminum and steel scrap that It is used in food packaging.

However, the companies agree to monitor their prices and processes, for example, both Minsa and Meseca, both producers of corn for tortillas, assured that they will not increase their prices and will establish measures to reach an average cost 3 percent lower than current.

Coca-Cola launches tennis with Puma, in the middle of the World Cup event