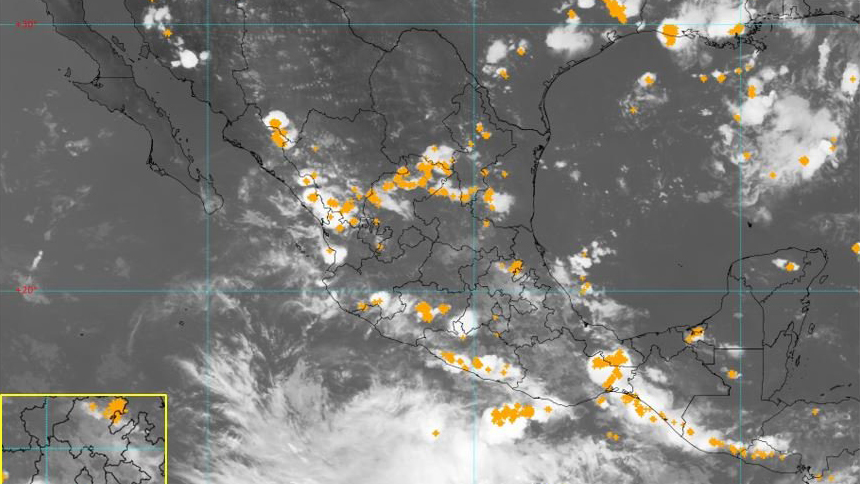 EFE.- Tropical depression Catorce-E was formed on Wednesday afternoon off the coast of Guerrero, in the Pacific Ocean, and in the next few days a category 1 hurricane could arrive, reported the National Meteorological Service (SMN) of Mexico.

He added that the meteor registered maximum sustained winds of 55 kilometers per hour (km / h), gusts of 75 km / h and displacement to the west at 13 km / h.

The SMN pointed out that the wide circulation of the cyclone “interacts with a low pressure channel extended over western Mexico and with Tropical Wave number 24” that will cross the Yucatan Peninsula and the Mexican southeast.

These conditions will generate intense punctual rains (from 75.1 to 150 millimeters (mm)) in Chiapas, Guerrero, Oaxaca, Puebla and Veracruz, as well as very heavy rains (from 50.1 to 75 mm) in Colima, Jalisco and Michoacán.

According to forecasts, the depression will intensify to a tropical storm on Thursday and will remain so on Friday and by Saturday at noon it could rise to a category 1 hurricane.

Just on Tuesday, cyclone Marty, which formed in the Pacific from the remnants of Hurricane Grace, degraded to a tropical depression in the last hours, without any danger to Mexico.

Read:  Supermarkets and department stores still do not reach the sales of 2019

The torrential rains generated by Grace caused the death of eleven people last weekend, eight in the eastern state of Veracruz and three in the central state of Puebla, in addition to severe flooding and damage in Veracruz, a state that sits on the Gulf from Mexico.

Days before, it had impacted the Yucatan peninsula, where it also left floods and power failures, although without fatalities.

Dolores made landfall on June 19 and had a special impact on the states of Colima and Michoacán, leaving three dead due to electrical storms.

The National Water Commission (Conagua), on which the SMN depends, predicted last May the formation of between 14 and 20 named systems in the Pacific Ocean for this season, while for the Atlantic it predicted 15 to 19 meteorological phenomena .