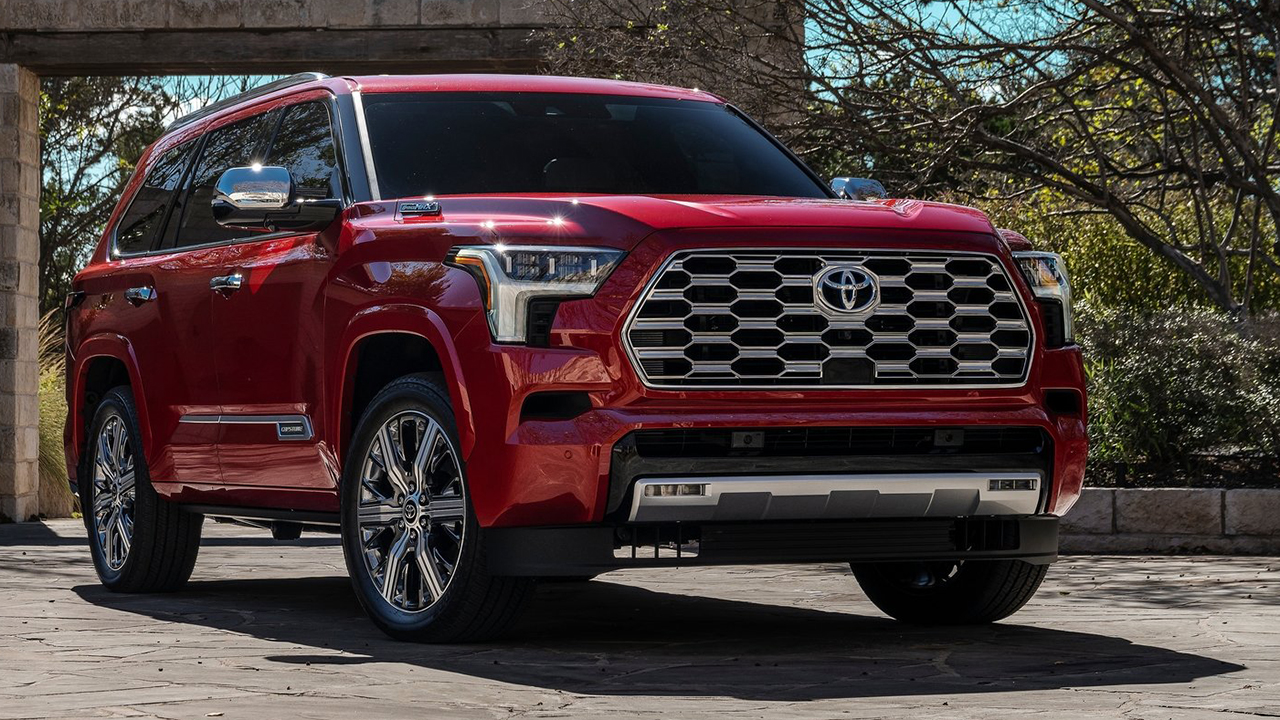 The new Toyota Sequoia has been presented in society. Toyota’s huge American SUV launches a generation with important new features. An SUV loaded with technological equipment and mechanics that succumbs to electrification and far exceeds the 400 hp barrier.

Toyota has decided to increase its commitment to the competitive segment of SUVs “full size”. Large SUVs play a leading role in the United States. The particular proposal of the Japanese brand for this category is no other model than the toyota sequoia. A model that had been crying out for a comprehensive renovation for years. Well, the wait is over.

has been presented the third generation Sequoia. The Toyota SUV has released very important new features and improvements. Among them is the commitment to electrification. The great inspiration has been the new Toyota Tundra, a model that also released a generation less than half a year ago. It will not be easy for you, since you have to deal with real heavyweights (pun intended) such as the GMC Yukon or the Ford Expedition.

The design of the new Toyota Sequoia 2023

How has the Sequoia changed? The truth is that just take a quick look at the images that illustrate this article to discover what are the most important developments in exterior design. It adopts a new design language and it is clear that the main reference has been the Tundra. At the front we find a large grille flanked by characteristic optical groups with LED technology.

The front bumper has very sharp shapes and prominent fenders. Depending on the version and/or configured package, the grill will adopt different finishes as well as patterns. The side view brings out the Sequoia’s SUV essence. The wheel arches are protected by defenses and to this we must add some roof bars. Mention should also be made of the wheels up to 22 inches.

Finishing our tour of the exterior at the rear, the elements to highlight are rear lights in a horizontal arrangement and that connect with a chrome trim to enhance the feeling of width.

In terms of personalization, the new Sequoia is well served, and it is possible to opt, in addition to different colors for the bodywork and wheels, for some exterior style packages. It’s about the TRD Sport and TRD Off-Road packages. Depending on the chosen package, the sporty or adventurous aspect of the vehicle will be enhanced.

The interior and technology of the new Toyota Sequoia 2023

Leaving aside the outside, if we go into the interior of the new Sequoia We will be surrounded by a huge interior that boasts space and, above all, technological equipment. Compared to the outgoing model we have a more modern and elegant interior. In addition, the brand has placed a lot of emphasis on improving the quality of finishes and trim.

Read:  The juggling of Porsche to balance autonomy and performance in its electrics

Once again if we keep in mind the new Tundra we will realize that numerous components of the pick-up are transferred to this SUV. The “powerhouse” is a large 14 inch touch screen which is located in the upper part of the central console and which is combined with a 12.3-inch digital instrumentation respectively. The Toyota Audio Multimedia multimedia system allows access to numerous digital online services. It is also compatible with Android Auto and Apple CarPlay.

At interior there is enough space to accommodate three rows of seats. The third row of seats can be slid to prioritize cargo space or, on the contrary, the space for the occupants of these seats. Some of the most outstanding equipment are the heated multifunction steering wheel, front and rear seats (second row) with heating and ventilation and JBL sound system.

The hybrid mechanics of the new Toyota Sequoia 2023

With regard to the mechanical section there are also important developments. And it is that this huge SUV has succumbed to electrification. Toyota has taken advantage of the generational change of the Sequoia to introduce in the range a non-plug-in hybrid version (HEV). It will be available exclusively with i-Force Max hybrid mechanics. Under the hood is a 3.5-litre V6 Twin-Turbo petrol engine accompanied by a small electric motor.

develops a power of 443 hp (437 hp) and 790 Nm of maximum torque. All this is managed through a ten-speed automatic gearbox. It will be possible to opt for an all-wheel drive configuration. The brand emphasizes that it has a towing capacity of more than 4,000 kg.

When will it hit the market? Toyota has indicated that, if all goes according to plan, the new Sequoia will be ready to storm European showrooms this coming summer. As soon as his landing approaches, the rest of the details of the range will be revealed. Like for example, all prices. The serial production process will take place in San Antonio, Texas (United States).