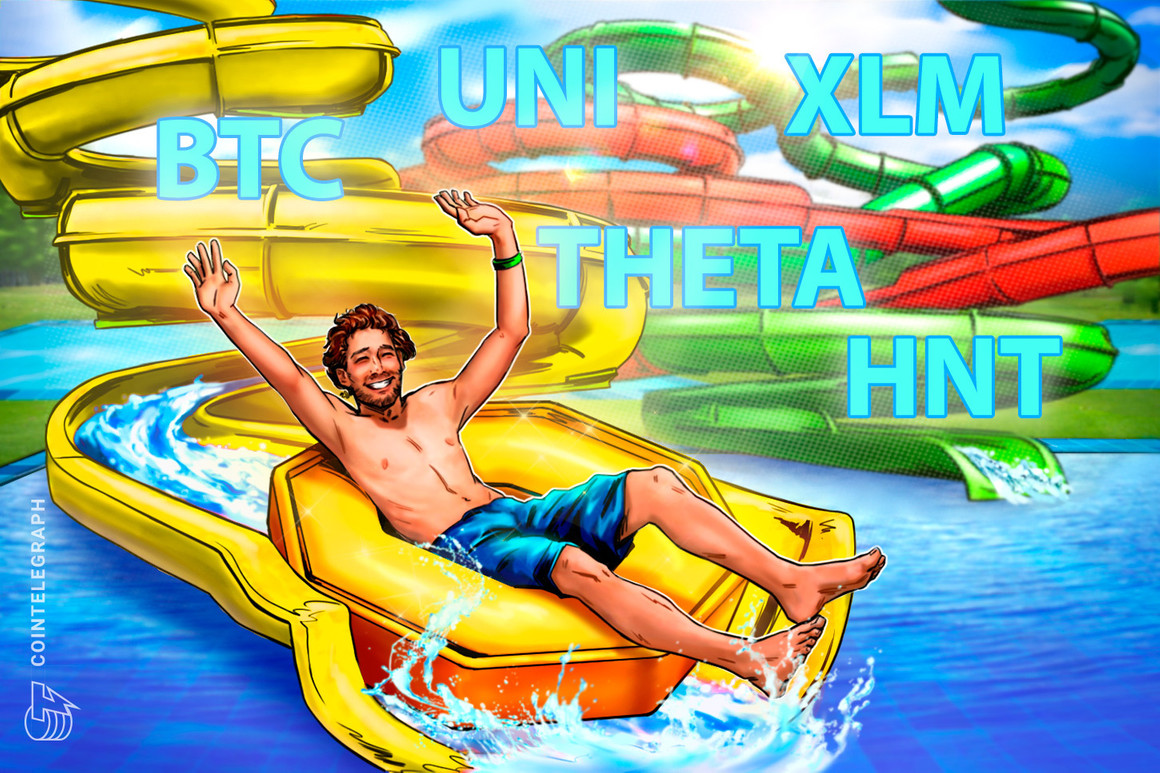 Although Bitcoin is struggling to establish a bottom, altcoins are on a roll and the current price action could benefit UNI, XLM, THETA and HNT.

US equity markets staged a strong rally last week, led by the Nasdaq Composite, which gained 7.5%. The S&P is up about 6.5% for the week, while the Dow Jones Industrial Average posted a 5.4% gain.

Keeping with its close correlation with the equity market, the crypto markets are also attempting a relief rally. Bitcoin (BTC) has seen a modest recovery, but some altcoins have risen strongly in the past week. This suggests that investors are taking advantage of the sharp price drop to accumulate altcoins at lower levels.

Smaller investors have taken advantage of the drop in Bitcoin to increase their position until they have at least one Bitcoin. Data from Glassnode shows that the number of Bitcoin wallet addresses holding more than one Bitcoin increased by 873 between June 15 and June 25.

Could the recovery of Bitcoin and altcoins pick up momentum? Let’s study the charts of the top 5 cryptocurrencies that could go up in the short term.

Bitcoin’s relief rally is facing stiff resistance near $22,000 as seen by the long wick of the June 26 candle. This indicates that the bears are unwilling to give up their edge and are selling on rallies.

Sellers will try to push the price towards the $20,000 vital support. This is an important level to watch as a bounce off it will suggest that the bulls are attempting to form a higher low.

That could increase the prospects for a break above the 20-day exponential moving average ($23.155). If this happens, the BTC/USDT pair could indicate a possible change in trend. The bulls will then try to push the price towards the 50-day SMA ($27.424).

Conversely, if the price turns down and drops below $20,000, it will suggest that the bears are still in control. The sellers will then try to sink the BTC/USDT pair to the crucial level of $17.622.

The fact that the bulls have failed to push the price to the 38.2% Fibonacci retracement level of $23,024 suggests a lack of demand at higher levels. The moving averages have flattened out and the RSI is just above the midpoint, which suggests a range-bound action in the short term.

If the price breaks below the moving averages, the pair could drop to $20,000. A break below this support could indicate weakness.

Secondly, if the price bounces off the moving averages, it will suggest that the bulls are buying the dips. The bulls will then try to push the price towards $23,024. If this level is crossed, the next stop could be the 50% retracement level of $24.693.

Uniswap (UNI) rebounded strongly from $3.33 on June 18 and has reached the tough overhead resistance of $6.08. The bears are aggressively defending the level, but a small silver lining is that the bulls have not given up much ground.

The moving averages are close to completing a bullish crossover and the RSI is in the positive zone, indicating that the path of least resistance is to the upside.

If the buyers push the price above $6.08, the bullish momentum could pick up and the UNI/USDT pair could rally to $8. This level could act as a stiff hurdle again, but if the bulls break through it, the next stop it could be $10.

On the contrary, If the price turns down from the current level and breaks below the 20-day EMA ($4.90), it will suggest that the trend remains negative and traders are selling near resistance levels.. The pair could then decline towards $4.

The bears are attempting to stall the recovery near the $6.08 resistance, but the rising moving averages on the 4-hour chart suggest that the bulls have the upper hand in the short term.

If the bounce from the 20 EMA holds, could increase the possibility of breaking above $6.08. If this happens, the pair could pick up momentum and rally to $6.66 and then $7.34.

Another possibility is that the pair turns down and breaks below the 20 EMA. In that case, the pair could drop to the 50 day EMA. A break below this support could invalidate the bullish view.

If the buyers push the price above the 50-day SMA, the XLM/USDT pair could try to rally to the overhead resistance of $0.15. If this level is cleared, it may signal the start of a new uptrend.

This positive view could be invalidated in the short term if the price continues down and breaks below the 20-day EMA. The pair could then slide to $0.11.

The moving averages on the 4-hour chart are rising and the RSI is in the positive territory, which suggests an upside for the buyers. The buyers will have to push the price above $0.13 to open the doors for a potential rally to $0.14 and then $0.15.

Contrary to this assumption, if the price breaks below the 20-day EMA, the pair could drop to the uptrend line. A break below this support could tip the advantage in favor of the bears. The pair could then slide to $0.11.

Theta Network (THETA) has been consolidating in a tight range between $1 and $1.55 for the past few days. The more time you spend inside a range, the stronger the breakout will be.

Both moving averages are about to complete a bullish crossover and the RSI is in positive territory. This suggests that the bulls have a slight advantage. If the buyers push the price above $1.55, it will suggest the start of a new move higher. The THETA/USDT pair could rally to the $2.10 pattern target.

Contrary to this assumption, if the price breaks below $1.55, it will suggest that the bears continue to defend the resistance aggressively. That could keep the pair stuck in range for a few more days.

The 4-hour chart shows that the price turned down from the overhead resistance of $1.55, but a positive sign is that the bulls are attempting to defend the 20 EMA. This suggests that the sentiment is turning positive and traders are buying the dips.

If the price rebounds from the current level, the bulls will once again try to break above the $1.55 hurdle. If they get it, could signal the start of a new uptrend. Conversely, if the price breaks below the 20-day EMA, the pair could drop down to the 50-day EMA.

The moving averages have completed a bullish crossover and the RSI is in the positive territory, which suggests that the bulls have a slight advantage.

The price has been hovering between the resistance line of the triangle and the 20-day EMA ($10.50) for the past few days. This is a positive sign as it shows a shift in sentiment from selling on rallies to buying on dips.

If the buyers push the price above the resistance line of the channel, it will suggest a possible change in trend. The HNT/USDT pair could rally to $16.50 and then to the pattern target of $18.50.

This positive view could be invalidated in the short term if the price turns down and falls below the 20-day EMA.. That could open the doors to a possible drop to the support line of the triangle.

The bulls are struggling to sustain the price above $12, which suggests that the bears are strongly defending the $12.50-$13.50 upper zone. If the price slips below the uptrend line, it could tip the short-term advantage in favor of the sellers.

On the other hand, if the price bounces off the 20-day EMA, it will suggest that the bulls are buying the dips. The bulls will make another attempt to break out of the overbought zone. If they succeed, the start of a new upward movement will be suggested.

The views and opinions expressed here are solely those of the author and do not necessarily reflect the views of Cointelegraph. All investments and operations involve risk, so you should do your own research when making a decision.