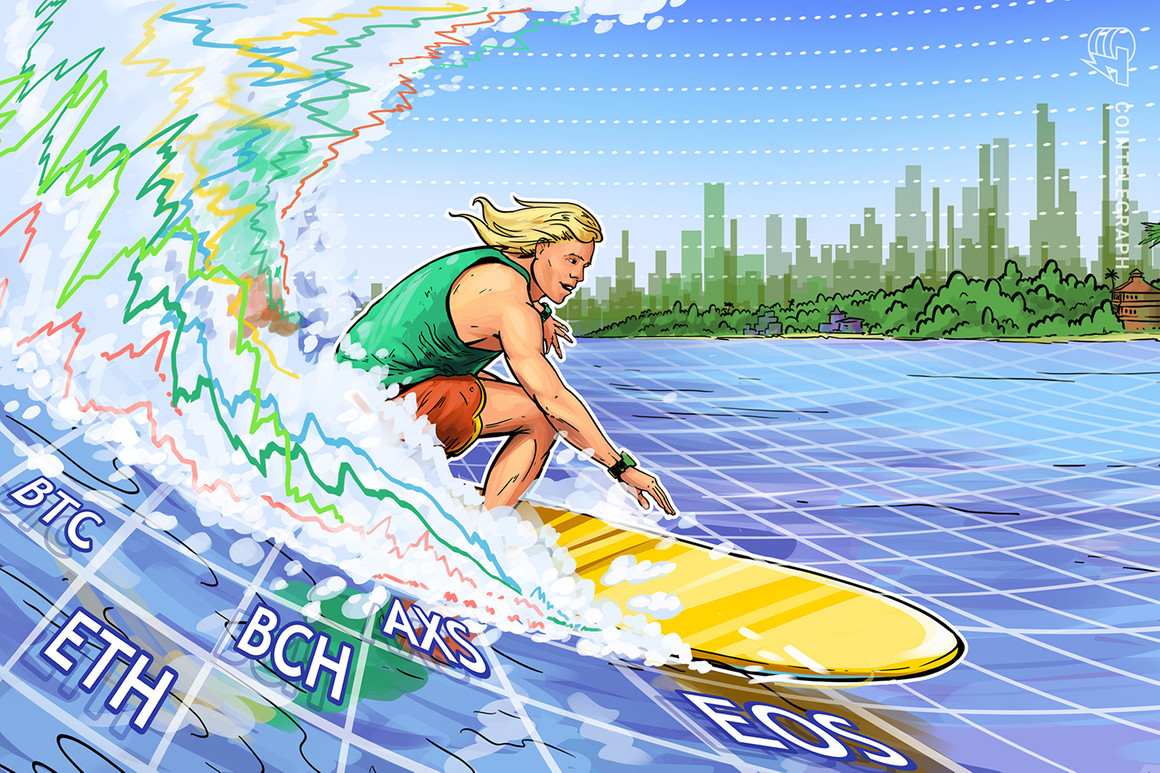 If Bitcoin breaks through its overhead resistance level, ETH, BCH, AXS, and EOS could resume their uptrend with surprising force.

The bulls are trying to make a strong weekly close for Bitcoin (BTC), while the bears are trying to regain their advantage. Analysts are closely watching the 200-week moving average at $22,705 and the current BTC setup suggests a decisive move is imminent.

Many analysts expect a weekly close above the 200-week MA to attract more buying, but a break below it could signal that the bears are back at it. Although the short-term outlook looks uncertain, analyst Caleb Franzen said that Bitcoin has been in an accumulation zone since mid-May.

Meanwhile, on-chain analytics firm CryptoQuant highlighted the surge in Ether (ETH) withdrawals from major exchanges, totaling $1.87 million worth of coins on July 22. Typically, withdrawals from cryptocurrency exchanges suggest that traders are long-term bulls, so they may be moving their coins to safety.

Will Bitcoin be able to resume its recovery, attracting the purchase of certain altcoins? Let’s study the charts of the top 5 cryptocurrencies that look great on charts.

The bears attempted to sink Bitcoin back into the symmetrical triangle on July 23, but the bulls had other plans. The bounce from the breakout level of the triangle indicates that the buyers are defending the level aggressively.

The gradually rising 20-day exponential moving average ($21.865) and the RSI in positive territory indicate upside for the buyers.

Conversely, if the price breaks below the 20-day EMA, the pair could drop to the next support at $20,500.

The pair has formed a descending wedge pattern on the 4-hour chart. If the buyers push the price above the pattern, the pair could touch $24.276 again. A breakout and close above this level will resume the uptrend.

The 20-day EMA is flat and the RSI is close to the midpoint, indicating a balance between supply and demand. If the price turns down and breaks below the 50-day SMA, the pair could drop to the support line of the wedge.

Ether is facing strong resistance at $1,700, but a positive sign is that the buyers have not given up much ground. A tight consolidation near overhead resistance increases the probability of a break above it.

The pair bounced off the 50-day SMA, which indicates that the bulls are buying the dips. The buyers will try to push the price towards the overhead resistance of $1,700. Both moving averages are sloping up and the RSI is in the positive territory, which suggests that the path of least resistance is to the upside.

If the bulls push the price above the $1,650-$1,700 resistance zone, the momentum could pick up and the pair could resume its uptrend. To invalidate this upside, the bears will have to sink the pair below $1,450.

Bitcoin Cash (BCH) is trying to bottom after a prolonged downtrend. The price turned down from the overhead resistance of $135 on July 20, but a positive sign is that the bulls defended the 20-day EMA ($117) aggressively.

Read:  Summer Game Fest 2022 date and time and how to watch it

The price action of the past few days has formed a rounding bottom pattern, which will complete on a breakout and close above $135. If this happens, it will suggest that the BCH/USDT pair may have bottomed out at $95. The pair could then rally to the pattern target of $175 and later to $200.

Another possibility is that the pair consolidates between the 20-day EMA and $135 for some time. A break below the 20-day EMA could tip the advantage in favor of the bears.

In the 4 hours chart, the bulls have broken above the resistance line, opening the door to a possible recapture of $135. The rising moving averages and the RSI in positive territory indicate that the path of least resistance is to the upside. . If the buyers break above $135, the pair could pick up momentum and move towards $157.

On the contrary, if the price breaks below the 20-day EMA, the pair could drop to the 50-day SMA and subsequently to $117. A break below this level could tip the advantage in favor of the bears.

Axie Infinity (AXS) has consolidated in a downtrend. This suggests that the bulls are trying to form a bottom.

The 20-day EMA ($15.55) has flattened out and the RSI is in the positive zone, which indicates a balance between supply and demand. This balance could tip in favor of the buyers if they push the price above the overhead resistance of $18.53. If this happens, the AXS/USDT pair could start a rally towards $25.21 and then towards $28.20.

On the other hand, if the price turns down from $18.53 and breaks below the moving averages, it will indicate that the pair may spend more time in the range. The bears will have to sink the price below $11.85 to gain the upper hand.

The 4-hour chart shows that the price turned down sharply from the overhead resistance of $18.53, indicating aggressive selling by the bears. Now the sellers will try to push the pair to the 20 EMA. If the price bounces off this level, the buyers will once again try to break above the overhead resistance. If they succeed, it will be the start of a new upward movement.

Conversely, if the price breaks below the 20 EMA, the pair could slide down to the 50 EMA. This is an important level to watch out for because if it breaks down, the bullish momentum could weaken.

The moving averages have completed a bullish crossover and the RSI is close to the overbought zone, which indicates that the bulls have the upper hand. The price could rally to $1.46, where the bears could mount a strong defense.

If the EOS/USDT pair does not give up much ground from $1.46, it will suggest that traders are not closing their positions. This could improve the prospects for a rally above $1.46. This move will suggest a possible change in trend.

This positive view could be invalidated if the price turns down from the current level and breaks below the moving averages.

In the 4 hours chart, both moving averages are sloping up and the RSI is close to the overbought zone, which indicates that the pair is in an uptrend.

The pair is facing resistance near $1.26, but the buyers have not given up much ground. This suggests that the bullish momentum remains strong. If the price turns higher and breaks above $1.26, the rally could reach $1.33 and then $1.46.

Contrary to this assumption, if the price breaks below $1.20, the next stop could be at the 20 EMA. If this support also breaks, the decline could extend to the 50-day SMA.