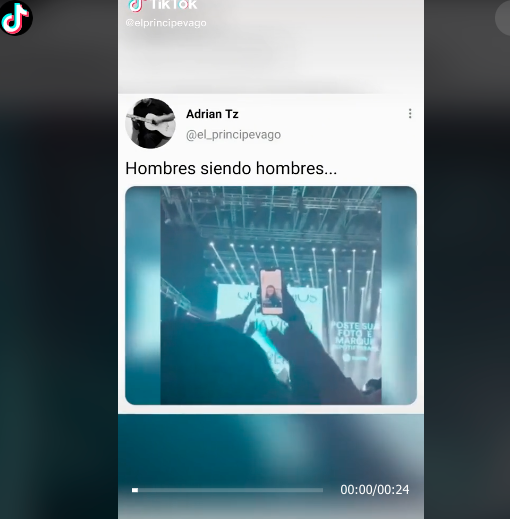 The way in which people relate to each other has been transformed, now digital daily life allows you to search for friendship or love relationships from anywhere in the world and at any time, as demonstrated by a network user, who went viral for making a match with a user of Tinder at an unusual time, turning the app into the protagonist of a concert.

Derived from social confinement, social platforms and networks have become the great trend among active internet users, which, to date, represent just over 62.5 percent of the population. world population, This is in accordance with what was indicated by the last report of We Are Social, Digital Report 2022, figure that shows the importance that a community of more than 4.95 billion Internet users has on the way in which society now relates.

Tinder becomes the protagonist in a concert

The growing digital community is increasingly using dating apps, according to a report from Specialized media, nowadays Tinder dominates this market, with just over 57 million monthly active users, while Badooregisters 15 million users during the same period.

Given the growing activity of users within dating apps, it is beneficial to try to find some kind of relationship, since in addition to offering you the possibility of meeting people other than your social circles, it also allows you to find an emotional connection as pointed out by a viral video in which it is seen how a man, with the help of a group of hundreds of men, looks for love at the least expected moment, until ending up in a match.

Because one of the main characteristics of social networks is to facilitate communication between people, they are widely used in the search for a partner or relationship, since, according to what was indicated in the report of TheCui.com, only in Mexico 30.2 percent of dating app users enter with the purpose of establishing a formal relationship, while 28.9 percent seek only casual encounters.

Read:  This is the viral video that inspires you to save your money

Relationships as a couple are a fundamental part of daily life, since it is with them that we seek to create a harmonious, pleasant environment, which has an impact on all aspects, since it improves performance, reduces stress and generates well-being; therefore, dating applications registered an increase during the forced confinement in their number of users, placing Tinder with just over 72 percent of returning users to these apps and evidenced the need for human beings to relate and maintain connections inside and outside the new digital normality.

Therefore, knowing love within one of these social networks is feasible, as demonstrated by another user, who indicated that she met her partner and true love through one of these platforms; Both stories have motivated the community to continue searching for their perfect partner through digital platforms.

These two cases only show that today social networks play an indispensable role in the lives of thousands of people, since it is within them that a large part of the population works, has fun, studies and interacts… making the physical distance less and less an impediment.

“And me criticizing Tinder”; dream story gives the best publicity to the app
Google gives in to Tinder and the dating app withdraws the lawsuit
He sells a Hot Wheels collection to pay for his wedding and this is how collectors react
Zara triumphs at the wedding of Britney Spears with Selena Gómez and her “low cost” look