tiktoker cries and asks to be kept 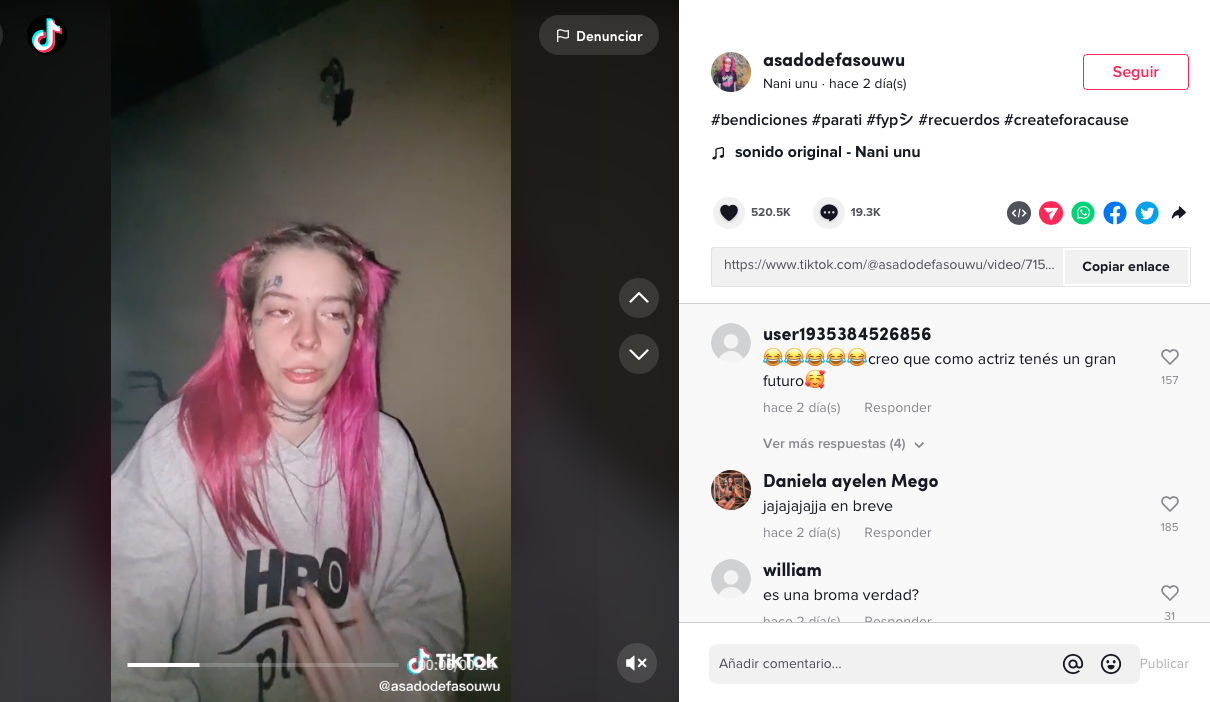 Social networks have become the best tool for people around the world, which is why many figures have emerged that expose their lives in this digital space. Recently, an Argentine tiktoker has gone viral for a video where she comes out crying and explaining that she was not born to work, so she asks her followers to support her.

And so, as currently one of the best known and most popular social networks in the world is TikTok. That is why the Chinese digital platform was positioned in January 2021 among the top ten social networks, registering 655.9 million users worldwide, according to a company report.

Data of Sensor Tower 2020explained that it is one of the most downloaded applications in the world in the last few years, with two billion downloads between the Google Play Store and the Apple App Store, is TikTok.

Given this, content creators who make a living on this social network can generate a lot of money. The Chinese social network has a business model for which you pay, Influencers are paid primarily based on the number of likes, views, and comments on sponsored videos.

Of course, this digital platform is not yet as well established as YouTube and does not have an efficient way for tiktokers to earn money, like YouTubers can with ads.

Tiktoker cries in networks because he does not like to work

Recently, a video of an Argentine woman who identifies herself as a tiktoker, crying because she doesn’t like to work, went viral on TikTok.

The content creator, better known as @asadodefasouwu makes a peculiar request to her 244 thousand followers, to whom she begs that they sympathize with her and that someone support her, since, according to her, she was not born to work.

“Please. This is a call to solidarity. I wouldn’t do this if it wasn’t really urgent. I need someone to support me,” says the woman in her 24-second recording.

To date, it is unknown if the video of Nani unu, a woman from Argentina, is a real request or a joke. But it did not take long to draw the attention of users, who could not help but see it, like it and write their opinion in the comments, so that a few days after sharing, the recording has 7.1 million views and more than 497 thousand ” I like it”.

“We are two friends, if you get an old man let me know that I’ll help you, last if you don’t like the shift, tomorrow I’ll do it without a problem,” says a comment.

“I love you Nani, when I get a job I’ll support you,” says another comment.

“I think that as an actress you have a great future,” says another of the comments.

The recording in which Nani asks to be kept not only went viral all over the Internet, but also caught the attention of all local and international media. For this reason, two days after publishing it, the young woman uploaded another video in which she begs them to stop with the bullying and stop sharing your video, since you have been asked for interviews and you don’t know what to say.

Likewise, in this second recording the woman assured that it is not a joke, she can also be seen crying and saying that even her mother has sent her messages to tell her that they are going to take away the financial support for her daughters.

This content creator is not the only one who uses her influence on social networks to ask her followers for things, there is the case of a yotubers who goes by the name of Karen Liao, who, during a live broadcast, has unleashed a large amount criticism against him. The influencer received a donation of one dollar from one of her followers, a fact that, apparently, she did not like at all and she said, “don’t be poor. Did you give me 1 dollar? Did you know? I’m only going to get 60 cents. Well, if you don’t subscribe right now I’ll ban you “, mentioned the youtuber in full transmission.

This type of content can generate many comments in the digital pulse, where many of these content creators are criticized for only waiting for donations and not working.