Tickets to see the Atlas in the final will cost up to 5,500 thousand pesos 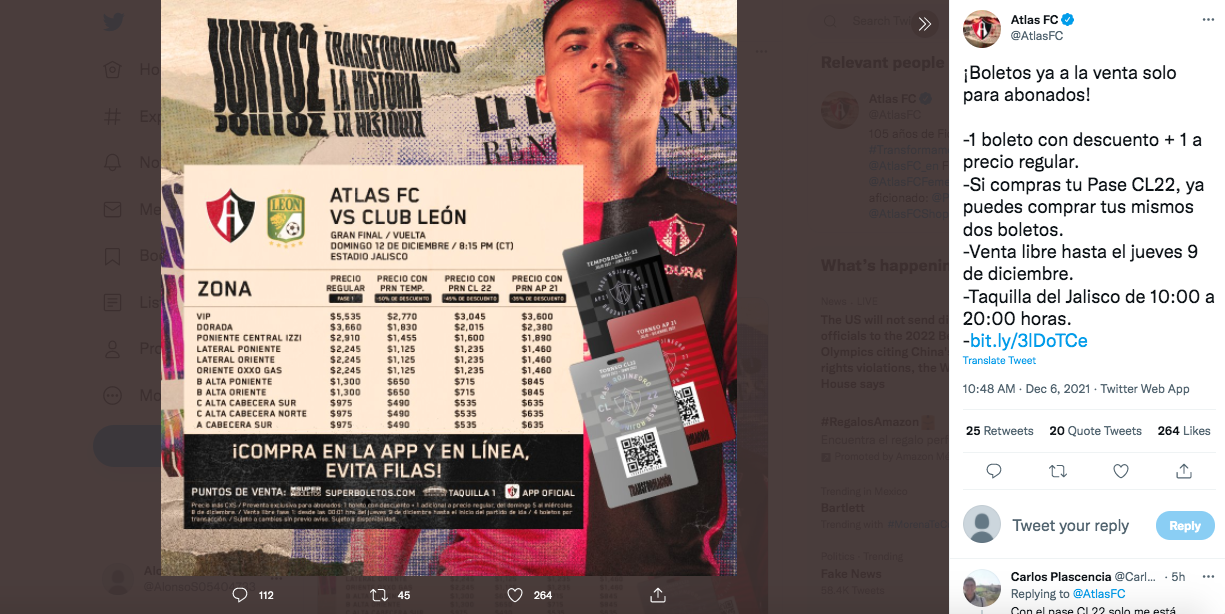 More than 20 years later, Club Atlas is returning to a Mexican soccer final and, therefore, it is that tickets are being sold at extremely high prices.

It is true, there is a collective euphoria that makes Atlas fans experience one of their best moments. And it is that they had to spend more than 20 years to see the red-black club again in a final.

Far and very close at the same time are those memories of that Atlas who dominated with his good football, having a team that marked an era and that, for many, was the champion without a crown in the dramatic final against Toluca in the summer tournament of 1999.

Today, everything has changed and, in that sense, Mexican soccer is very different, but what does not change is the passion of the red and black fans who are still waiting for the longed-for second star after 70 years since their only league title.

This weekend, after leaving the Pumas out of the Autonomous University of Mexico, the other team from Guadalajara achieved the feat, now preparing for a week of screaming, where even social networks play in their favor, since yesterday It has not stopped being a trend on Twitter and, it seems, there is a general mood to see them crown themselves again.

However, it must be said, not everything is joy among the fans, as the club has shared the prices for the second leg to be played next Sunday at the now legendary Jalisco Stadium.

From the outset, the maximum price that is being put on the tickets for the final Atlas vs. León is $ 5,535 pesos, while the cheapest has a cost of $ 975 pesos.

Tickets now on sale only for subscribers!

Immediately, through social networks, there has been a very general dissatisfaction with what the tickets cost for the return final.

Read:  Moms from Mexico will see Sing 2 only for Chayanne

In the understanding that there is a great commotion to see the team in the final, the truth is that it is about prices, yes, excessive, that leave out several of the club’s fans who have waited even more than 20 years for a event of this magnitude.

In some way, what happened with the Atlas has a similarity to Cruz Azul, two teams used to being far from the limelight and the media spotlight. So once they see each other arrive at a game like the one they will play this week, of course there will be a great furore.

However, the price list that Atlas released on the occasion of the second leg against León is surprising, especially because, as is often the case in these cases, the reseller has already done its “job” and, of course, the tickets have been reported as sold out.

Videos circulate on social networks where fans are seen to face blows with resellers and, in addition, a particular battle of comments began on Twitter that, without a doubt, speak of one of the biggest and most recurring problems, and that, nevertheless , not much has been done to solve it.

Fight in Jalisco between fans and resellers. pic.twitter.com/ZrX4kmmCyP

If we take into account that, from the outset, paying more than five thousand pesos for a soccer game is an excess (of course, there will be someone who will pay for it), reselling will raise that figure even more, making access to the common fan even more impossible, which is the one that, traditionally, has followed the Atlas for years.