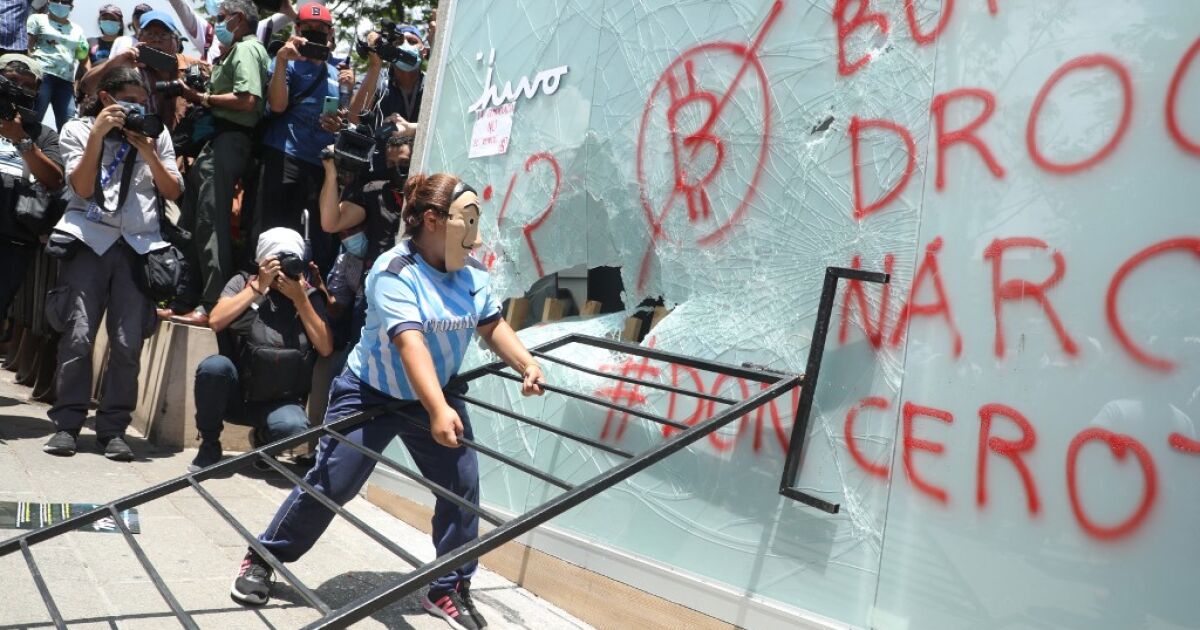 Before the fire, the protesters had written the slogan “no al Chivo de Bukele” on one of the walls of the premises where the cashier was.

Showing banners with slogans such as “Respect for the Constitution”, “Against the dictatorship, resistance and popular rebellion” or “No to bitcoin”, the protesters, from different sectors of San Salvador, closed in the central Plaza Francisco Morazán.

Index hide
1 Nayib Bukele accuses foreign interference and says he will not hesitate to dissolve violent protests
2 “Accelerated authoritarianism”
3 “The Republic in danger”, they say no to reelection

The president ruled out having infiltrated the protests with government agents, as the organizers accused.

“This time they were ready for battle, even with weapons, and they found no resistance, there was no police, they went to fight against a dictatorship that does not exist. And yet there are many in the international community who continue to sell it. [la existencia de una dictadura]”Nayib Bukele commented.

“Here there is no dictatorship, here there is a democracy that has expressed itself freely at the polls and not once but twice,” he said, alluding to his victory in 2019 and that of his allies in the February 2021 legislative elections. He added that while they have not used a single tear gas bomb since he came to power, he could do so in case the demonstrations turn more violent.

The demonstrations occur despite the fact that Bukele, in power since 2019, enjoys wide popularity and has capitalized on citizen discontent with the traditional parties that ruled the country for three decades. Time magazine included him on Wednesday in the list of 100 most influential people in 2021.

At night, the ruler accused the international community of financing the demonstrations:

“Unfortunately they are protected by some friends of the international community. I say some because they are not all. But some, even funded. The sad thing is that they are financing a perverse opposition, which does not mind harming children, the elderly,” Bukele said during a televised speech on the occasion of the country’s Bicentennial.

The organizers of the march had denounced that masked men had tried to infiltrate the protest to sow violence and discredit their demands. But Bukele dismissed it.

Read:  Belarusian Olympic Committee vows to defend its delegation in Tokyo from "all discrimination"

The judges, who appeared in suits and ties, reject a law that Congress, dominated by Bukele’s allies, passed on August 31 to fire judges with 60 years of age or 30 years of service, leaving the Power Judicial without a third of its magistrates.

“That 259 judges leave is not the serious thing, the serious thing is the affectation to the judicial independence that the president is doing. There is something more serious, which is the total loss of the rule of law that has cost us so much,” he commented on his Judge Luciano Lovato, 55 years old and with 23 years of service, starts.

“The Republic in danger”, they say no to reelection

The protesters also showed their opposition to a recent interpretation that the Constitutional Chamber of the Supreme Court of Justice made of the Magna Carta, to allow Bukele’s immediate presidential re-election.

The magistrates who ruled in favor of the consecutive reappointment of the president, if he so wishes, were appointed by the ruling Congress on May 1, after dismissing the previous judges.

“The Republic is in danger, that is why we are demanding respect for the independence of powers and we do not agree with the presidential reelection,” commented Zaira Navas, from the Cristosal Human Rights NGO.

“If we as judges do not believe in the division of powers or we take the Constitution as a dead letter, this country is over,” warned the magistrate of the Chamber, Martín Rogel.

For the organizers of the marches, it was the “largest” rally against the Bukele government in the two years he has been in office.

The most attended demonstration was the one that came out of the Cuscatlán park, in the west of the capital, where peasants, workers, activists from different union and professional organizations participated.

“We march because we do not want that bitcoin law, because it does not favor us (…) sometimes it goes up or sometimes it goes down, it is very volatile,” Natalia Belloso, 41, who wore a white T-shirt with the emblem, told AFP ” No to bitcoin. “

“We are giving a message to the government that there are citizens who do not agree with some measures,” declared the president of the Medical College of El Salvador, Milton Brizuela.

The government established this cryptocurrency as legal tender in the country since September 7, at par with the dollar. For the feminist leader Morena Herrera, “with different tones, there was a great coincidence” of the different organizations participating in the protest.

These are the Xiaomi you need to show off MIUI 13