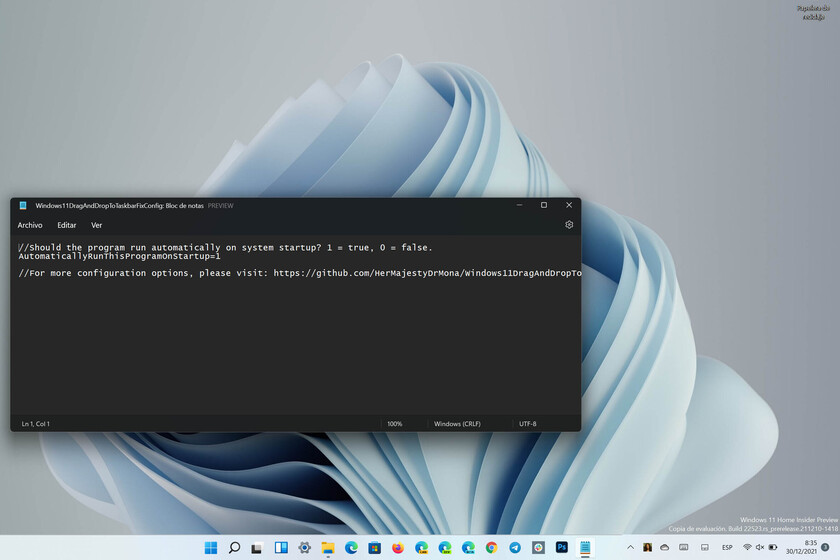 Windows 11 has been a series of interesting improvements for the user but among all the changes there is one that has not been particularly positive. The taskbar lost the ability to drag and drop, an option that can be recovered with this application free.

An app that can be downloaded from Github, that is open source and that returns the ability to drag files to the user to applications that are not open in the taskbar, that they open automatically and thus save precious seconds.


One of the lost functions in Windows 11 is the option that allows you to drag and drop files to programs whose icons are on the taskbar. A feature present since Windows 7, widely used, but eliminated with the arrival of Windows 11.

If you are used to this action, the tool “Drag & Drop to the Taskbar”, available on Github, allows you to bring back much of the functionality. It is an application that installs itself and recovers the lost capacity of Windows.

Without becoming portable, it is a lightweight tool that does not add files DLL and does not change any system registry keys except autostart by itself when configured manually.

The form works in such a way that when you drag something to the taskbar, it waits a few milliseconds to see if the action is valid and simulates Win + T keyboard combination. A key combination used to switch between the windows of a program on the taskbar, and in this case used to open files.

Read:  Now is the time to buy the Xiaomi Mi Band 6: it drops for the first time at only 23 euros in price | Technology

For now and as quoted in GHacks, the tool does not allow creating shortcuts to the taskbar and according to the developers “this function is not being worked on”.