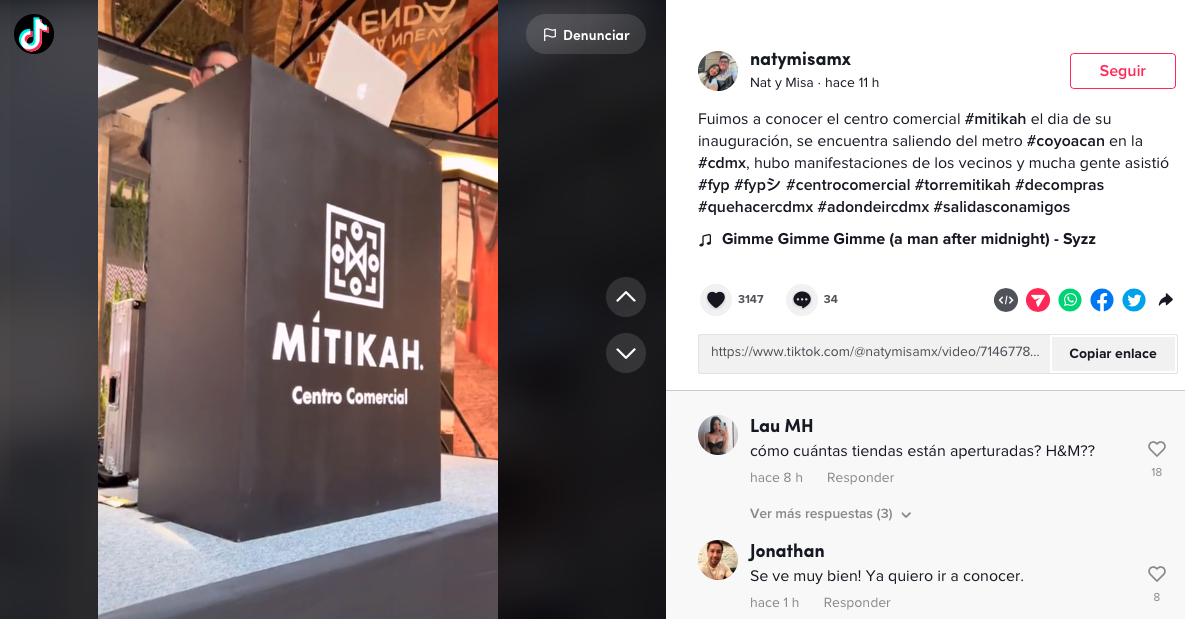 Social networks have become the best tool for people around the world, that is why any topic that is a trend, they will take it to create their content and gain the interaction of Internet users. This is the case of the inauguration this Friday, September 23, of the new Mítikah shopping center, which after almost 14 years of construction opened its doors to the public and tiktokers created content with its facilities.

In the last 5 years, the Mítikah Tower has been one of the most recurring themes among Mexicans, especially those who live in Mexico City in the south.

The project as a whole, which includes residential housing spaces, a shopping center, offices, clinics, services, green areas, required an investment of around 22.5 billion pesos, with a dimension of 1 million square meters.

Let us remember that the architectural design was in charge of the offices Sordo Madaleno, STANTEC, Ten Arquitectos, Colonnier Architectos, PCPA, among others.

The history of this square goes back many years, where fiber one took over the construction of Mítikah in 2015, when it bought it from Ideurban and Prudential for $185 million; The work had already caused controversy in the Benito Juárez Mayor’s Office, when the residents of the Xoco neighborhood joined together due to concerns about the lack of water and the reduction of green areas.

As a new city attraction, people can now enjoy the facilities at Mitikah Square.

The shopping center has more than 280 commercial spaces, five levels and 120 thousand profitable square meters. In addition, it has businesses such as H&M, Victoria’s Secret, Abercrombie, Hollister, Berger, Mont Blanc, Hugo Boss, All Saints and many others; also a sports runner with brands such as Nike, Adidas, Puma, Lululemon, among others.

Read:  HBO Max and the irony of 'The House of the Dragon'

Social networks, especially TikTok, have been flooded with content where tiktokers use the new facilities to create content for their communities and show what the square that has the capacity to receive twelve million people looks like.

From recordings where you can see the route from the square to the apartments, to videos with the most striking details of the infrastructure, which is the tallest skyscraper in Mexico.

@natymisamx We went to see the mall #mitikah On the day of its inauguration, he finds himself leaving the subway #coyoacan on the #cdmxthere were demonstrations by the neighbors and many people attended #fyp #fypシ #Mall #torremitikah #Shopping #chorecdmx #whereircdmx #outingwithfriends ♬ Gimme Gimme Gimme (a man after midnight) – Syzz

In most of the videos that record millions of interactions, you can see how imposing the infrastructure of the Plaza is, and the exclusive decoration used by its creators, so that it is added to the 209 shopping centers, which is equivalent to 6.2 million users. square meters, which has the Metropolitan Area of ​​Mexico City, and is the region of the country that has the most.

Political campaigns on TikTok are going to change forever