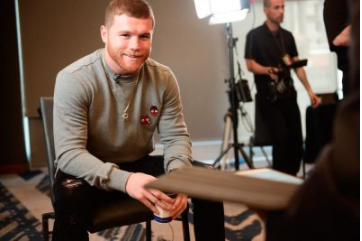 Saúl Álvarez Barragán, better known as the “Canelo” Alvarez, is one of the most outstanding Mexican boxers in recent years, who has won various championships in at least four different weight divisions, being champion of the World Championship WBA, WBC, WBO, IBF and The Ring of super middleweight, fame that has led him to generate large profits, which he has invested in businesses such as the growing chain of self-service stores, where now it has been revealed how much an employee earns as a store manager.

During 2022 the sports industry in Mexico it generated just over 988 million dollars, while the economic income generated by football exceeded 900 million pesos in 2022; however, within the world of boxing it is estimated that a professional can earn up to 200 dollars per fight (just over 3,900 pesos), a figure that can vary radically depending on the importance, popularity and the city in which he fights. where the meeting takes place, as well as the fame of the opponents.

It is currently estimated that the Mexican boxer, a native of Guadalajara, He has a fortune of more than 140 million dollars.a figure he has reached during his career as a high-performance athlete and his investments in various businesses, such as stores “Upper by Canelo Energy”, Oxxo-type establishments established in Mexico.

Read:  The change in your digital marketing strategy explained in this Diploma

“Upper by Canelo Energy” It is the boxer’s new investment to diversify his business. Self-service stores have opened in recent days within the metropolitan area of ​​Guadalajara, counting for now with just over 30 stores that are already looking for staff.

According to what was recorded by the chain, This is the salary and the requirements to work in one of the “Canelo” Álvarez stores, according to the job offer of Indeed.

Within the job offer, a branch employee, under the position of “Store manager”you can win from 12 thousand to 14 thousand pesos per month under the following requirements and skills:

However, in the job search platform, the requirements and salaries proposed by the boxer’s firm are not far from what other large franchises offer, since stores like Oxxo They offer a salary for the same profile, of about 10,500 pesos, a figure that represents up to 27 percent more than the national average.

For the workforce, knowing the salary range offered by the different self-service stores allows them to look for new opportunities and know the salary range within the country, which helps them make more informed decisions regarding their economic future.

Farmacias Guadalajara wins over the consumer: with hand drawing it crushes any advertising campaign

A good newsletter and an effective mailing strategy: this book teaches you how to turn your clients’ emails into a gold mine