this is the painful conditions of the newly mobilized Russian troops 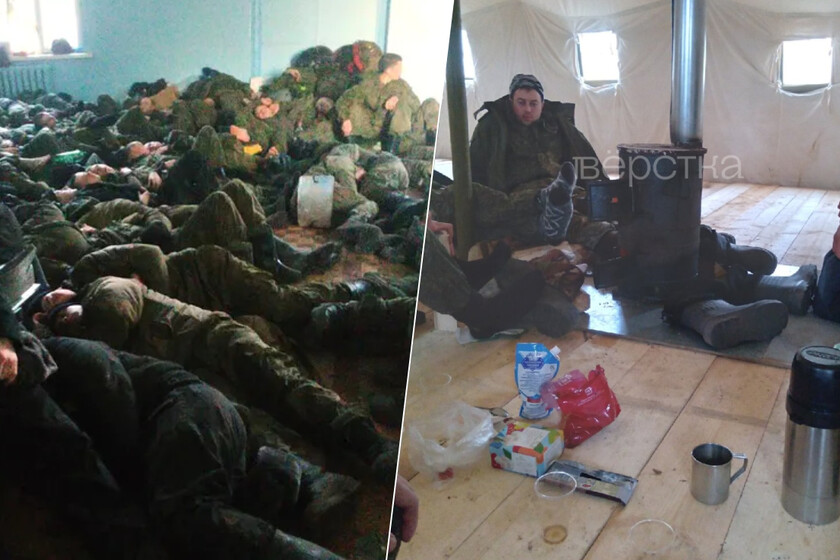 Russia continues with its partial mobilization of the civilian population, a campaign (actually massive and not very “partial”) aimed at reinforcing the vacillating war of almost eight months in Ukraine and bolstering the credibility of the Kremlin. Thousands of Russians are being summoned in a process that is reportedly chaotic and messy. Images of recruits sleeping on the ground, armed with obsolete rifles and ordered to get their own supplies they pile up in the nets.

Without training or knowledge of where they are deployed, they are denouncing “inhumane” conditions, shortages of weapons and food, and mistreatment by officers.

homeless. “Nobody needs us. We’ve been living in animal conditions for a week,” a soldier is heard saying in a video picked up by The Insider. In it, the soldiers state that they have not received material support or financial compensation since they were summoned. In fact, several media outlets point out that it was the soldiers’ wives who spent up to 2,500 euros equipping their husbands. And, in theory, it’s illegal to require soldiers to buy their own gear.

How is life for the troops? Russians on the front lines lack food, uniforms, money and places to sleep, according to a statement released by the Ukrainian Defense Ministry. There are not enough toilets and there are many patients who do not have medical assistance. In this Twitter threadfor example, some of the hardships they experience every day are compiled: how they camp without heating, without food, without sleeping bags, without hot water, without bathrooms, with mattresses infested with bedbugs.

He tells how the first day the mobilized men had to stand for several hours in the torrential rain while the commanders decided what to do with them. Drenched, they were assigned to barracks, but there were no stoves to dry their clothes. There were also no showers, toilets, or hot water. No sleeping bags were provided and the men slept on dirty old mattresses infested with bed bugs. We know that the situation of some soldiers is bad, yes, but we also do not know if that of the others is good. We must bear in mind that the information that reaches us from Russia is opaque and that it is difficult to see what is really happening.

Recently mobilized #Russian soldier shows his everyday life in the camp. They don’t receive anything, so to survive, they need to steal basic things like mattresses or wood stoves from others. pic.twitter.com/wk9Aj1u1zs

No training. When the mobilization was launched, the Russian authorities declared that only people with combat experience would be called to war. But in practice, the mobilized, a few days after the call, found themselves on the front line and died. “Like meat, in an assault group”, details some soldiers in this BBC article who were sent without any preparation to the front in the Kherson region. Another group from Bashkortostan were given assault rifles but not taught how to use them.

An acquaintance of one of the victims sent the BBC a recording of a telephone conversation in which a mobilized man from Chelyabinsk: “We arrived on the first day and we were like meat. I read the instructions on how to use the weapons. On the third day they were 200 meters from us and they started assaulting us. They beat me. We fired for another hour and they were already 50 meters away. Without cover, the armored personnel carrier that covered us burned. How I got out, I don’t know.”

The coffins are already arriving: In total, about a thousand people fell after the mobilization in the area, according to acquaintances of the victims. And reports have already begun to reach relatives about the death of those mobilized. The army struggles to balance two goals: deploying enough troops to stop recent Ukrainian advances while rebuilding ground forces decimated during months of war. And of course, some recruits have already been killed or captured, drawing increasingly harsh criticism of the mobilization effort and considered a disaster since it was announced.

As we have told in Magnet, the Kremlin had spent weeks imprisoning or fining those who questioned the invasion. Recently, they increased the penalties for soldiers who desert or refuse to fight. But all these videos of the conditions untrained soldiers are being subjected to show that Putin is taking the war beyond all possible logic.