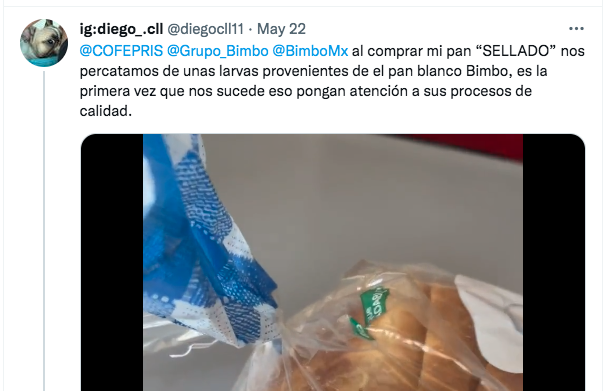 A larva entered one of Bimbo’s flagship productsthe bread, a fact that, as expected, has disgusted the consumer of the brand.

In terms of social networks, we live in a very diverse scenario and, therefore, of information overload, thanks to the fact that, definitely, anyone can upload all kinds of news and content to their accounts.

Based on this, it is well known that, at present, platforms such as Facebook, Twitter, Instagram, TikTok and all the others, have been placed among the main uses by Internet users.

Beyond the great technological tool that they represent, there is no doubt that each of the social networks that have been launched over the years have changed everything in terms of trends, conversations and connectivity.

Thus, to this day, the relationship between brands and consumers has been enormously transformed thanks to the arrival of the networks, which is why it is necessary to maintain a clean image in this scenario.

In other words, users, in their role as consumers, today have a great platform to connect with the companies they have followed over the years, a fact that is verified by the conversations that are woven on social networks based on complaints , complaints or other comments.

Bimbo, one of the most recognized brands in Mexico, is once again in the consumer’s sights after he, as reported, found a larva in his bread, one of the brand’s flagship products.

Through a video, the tweeter shows the serious lack of quality control of the brand, a situation that, if escalated, could be extremely serious even for the health of the consumer.

Read:  nostalgic bimbo; surprises the museum of the Mexican brand on TikTok

In fact, there are two cases reported in less than a week; two different products, but with the same “ingredient” or “extra flavor”.

@COFEPRIS @Bimbo group @BimboMx When buying my “SEALED” bread, we noticed some larvae coming from Bimbo white bread. It is the first time that this has happened to us. Pay attention to your quality processes. pic.twitter.com/Z1ddEvHRMd

Hello, @Bimbo group my sister bought this bread and got a worm: pic.twitter.com/dGw0BuUpP3

In the first of the tweets, the user makes a call to the Federal Commission for the Protection against Sanitary Risks (Cofepris), which, in this type of case, mentions that:

“Health complaints are intended to inform this authority of the facts, acts or omissions in health matters, which, according to the perspective of the complainant, represents a risk or causes damage to the health of the population”reads on the Cofepris portal.

The damage to the consumer is serious and in this particular case we are talking about a fact that could be more than just a bad experience, directly affecting the health of the Internet user.

Bimbo is not the only brand for which cases like this are reported; Let us remember the case reported by a user of Twitter, who calls herself @karinaEstradaC, which shows that a worm was found inside a can of Great Value brand corn kernels.

I found a worm in the can of corn kernels.?? who is going to fix it @WalmartMexico @Profeco ? pic.twitter.com/zc5oOqubQI

This only reflects the opinion of the consumer and the conversation that it generates in the digital pulse, Therefore, Merca 2.0 requested the position of the brand in order to tell both versions of the story; however, so far it has not been received. The note will be updated in case of a response.