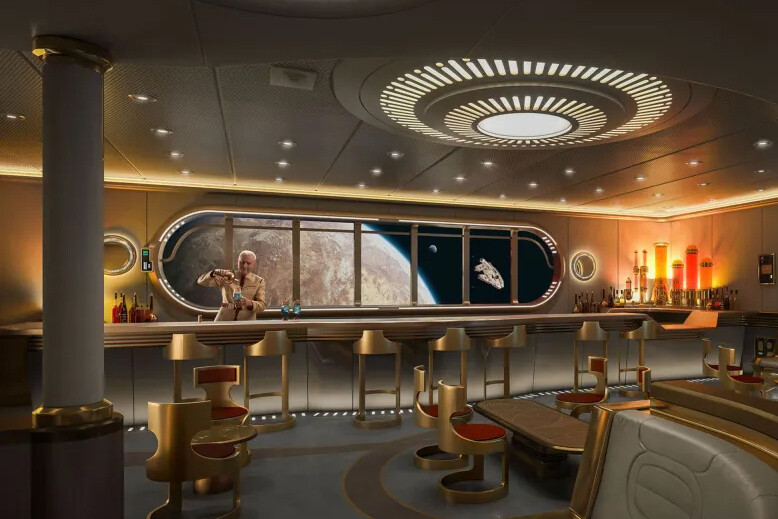 has been baptized as Kaiburr Crystal and can only be enjoyed in the Disney Wish cruises. Based on the saga of Star Warsit is served inside a camtono, those cylindrical white boxes that were used as a security container to store valuables.

And precisely that continues to be its usefulness on board the Disney cruise, since what we find in its star wars themed bar (Hyperespace Lounge) is a drink that they themselves define as “the most rare and valuable cocktail in the galaxy”making a nod to the energy crystals that power the lightsabers of the mythical saga of George Lucas.

The camtono were first seen in “The Empire Strikes Back”, although they would later have their star presence in “The Mandalorian”.

We do not know the ingredients of the cocktail, which It is priced at $5,000., but judging by the security measures, we assume that they must be premium spirits. Those who have been able to verify whether or not the price is justified with the guests who have been able to try it on the spot. And it seems that all the influencers who attended the presentation agree that the experience is worth enjoying. In fact, it seems that the tickets for these cruises, whose departure point is Florida (Port Canaveral), already they are practically sold out for the vast majority of dates.

$5,000 Star Wars-themed drink on the Disney Wish cruise, in action.

It should be noted that there are also cheaper options (non-alcoholic) within the Disney Wish, for which you will not have to spend $ 5,000. It is the case of oat milk smoothies, baptized “Cloud City”. In this case we would talk about a price of 7 dollars (6.71 euros).

In total, 2,500 beds are offered at prices of $3,000 for a double room and $5,000 (same as a cocktail) for families of four. The start date will be July 25 and the four-night trip to the Bahamas includes a stop at Castaway CayDisney’s private island that serves as the exclusive port for its ships.

Anyway, it is not the first time (nor will it be the last) that, from Disney, they surprise us with a gastronomic launch related to Star Wars. You just have to go through the newspaper library to remember those churros that turned into lightsabers or the shocking blue milk and other galactic cocktails that were available at Disneyland (California and Orlando).

In DAP | The Disneyland restaurant that charges $1,250 a cover: champagne, caviar and luxury in Mickey’s land
In DAP | Latin America is full of Moe’s bars, a tribute to The Simpsons that Disney doesn’t like

with a nice retro design and freezer