Bullfrag
Home Uncategorized This is how they “threaten” the Mexican National Team with propaganda for... 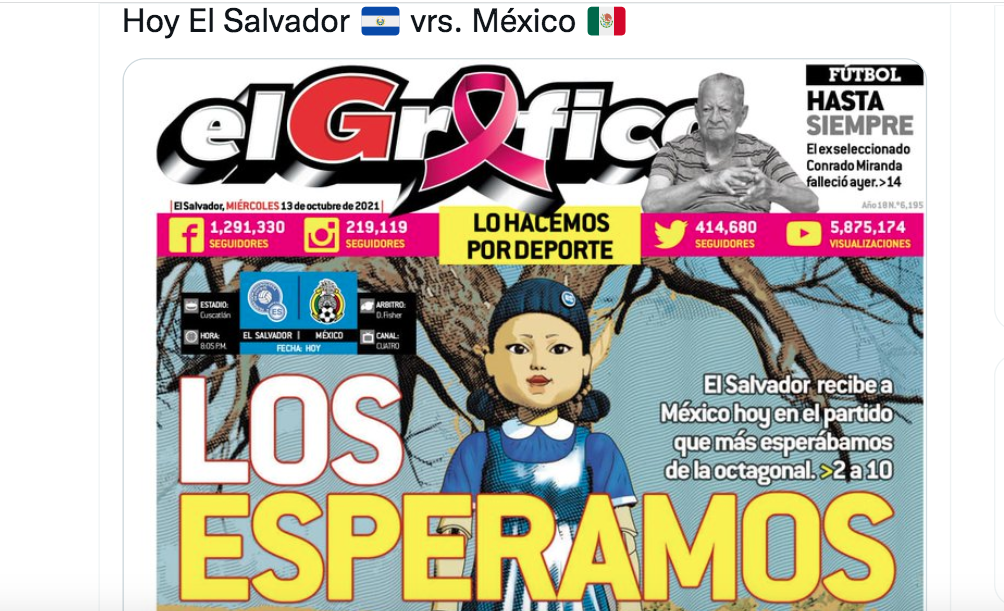 The Mexican Soccer Team visits El Salvador tonight in one more day of the octagonal towards Qatar, but the media “threaten” the four tricolor with propaganda of “The Squid Game.”

In a new episode of the success of the Netflix series, “The Squid Game”, today the protagonists are the Mexican Soccer Team and the media from El Salvador, a country where there will be football tonight in a new round of the octagonal final. But what does the “Squid Game” have to do with all this?

El Graphico, one of the most important sports media in El Salvador and Central America, is launching a cover reminiscent of the very popular Netflix series to launch a “threat” to the Aztec group.

And it is that, when it comes to attracting attention, all the resources are valid, and more so if they are accompanied by one of the most important trends in recent years, a reason that makes the propaganda of this medium more attractive.

With the legend “Los Esperamos” and an iconic image of “El Juego del Calamar”, this is how the Salvadoran media prepare to receive the Mexican Soccer Team in a match that, as usual, will give a lot to talk about.

The cover was also shared on social networks and has been the subject of several comments against the Mexican squad itself, as well as CONCACAF.

Undoubtedly, for soccer fans in El Salvador, tonight’s meeting is one of the most important, not only in the sporting context, but also in terms of pride, as both teams have lived through a history of truly controversial matches.

Visiting El Salvador, in soccer terms, has always been difficult for the Mexican Soccer Team, since historically they face a very hostile environment from the fans.

For this reason, it is not surprising that the media are playing the game with propaganda that, for some, could incite violence.

Now, what is most striking about this propaganda of the newspaper El Grafico is that they are resorting to a strategy that can be described as infallible, since we are talking about the Netflix series that is in fashion and that continues to cause a sensation around the world : “The Squid Game.”

This initiative joins other actions that fans are carrying out with the same purpose: to intimidate the rival team, which, if that were not enough, is one of the most powerful in the area, which is why some comments are focused on the arbitration of the match, hoping that it does not “help” the Mexican Soccer Team.

What is clear from all this, regardless of whether or not this propaganda incites violence, is the fact that “The Squid Game” is being used as a strategy to attract the attention of fans and, on the other hand , as a form of provocation towards the rival box.

It is nothing new, but, in these times when there is so much talk about the popularity that the Netflix series has reached, the success of the program is striking and that it is now being replicated to give propaganda to a common soccer game and current.

DTM 2021 preview and timetables at the Lausitzring circuit