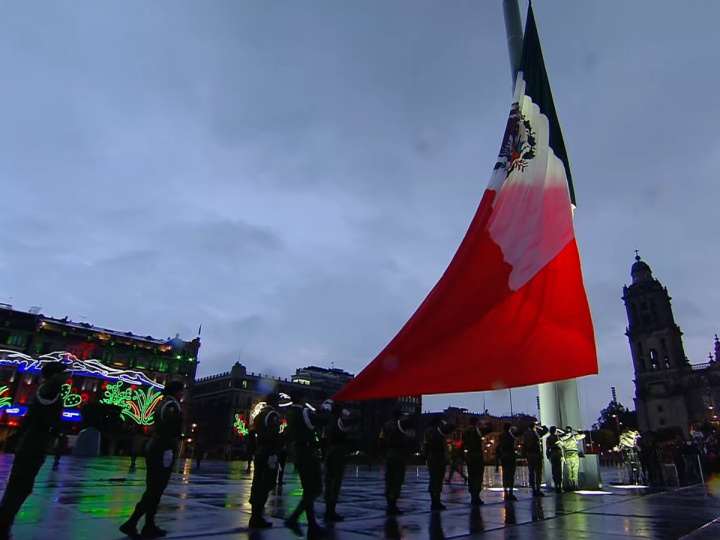 As part of the commemoration ceremonies, this Monday, September 19, President Andrés Manuel López Obrador (AMLO), led the raising of the Mexican flag at half-staff in memory of the victims of the 1985 and 2017 earthquakes in the Plaza de la Constitución in Mexico City (CDMX).

It is worth remembering that the raising of the flag represents a solemn act, since the date of September 19 is established in Article 15 of the Law on the Coat of Arms, the Flag and the National Anthem. In order to honor the lives of the people who tragically lost their lives during these events.

This date has marked the history of the country, where it is considered one of the greatest catastrophes. The earthquake of September 19, 1985 was forever etched in the memory of Mexicans. The telluric movement on that date was of magnitude 8.1 and woke up the country at 7:17 a.m., leaving an uncountable balance of dead, of which around 10,000 fatalities were calculated.

Also, on September 19, 2017, It is another date that marked the day and for which it is commemorated, since a magnitude 7.1 earthquake hit Mexico City.

This is how they remember 19S

At 7:15 a.m., President Andrés Manuel López Obrador (AMLO) left the National Palace, along with federal government officials, to attend the raising of the national flag in memory of those affected by the magnitude 8.1 earthquakes in 1985 and the magnitude 7.1 earthquake in 2017, which occurred on the same date.

During the event, the head of the federal Executive kept a minute of silence in memory of the people who lost their lives due to the earthquakes.

At the time, the members of the War Band of the Mexican Navy sang the Touch of Silence; After finishing, the elements executed the National Anthem, in the presence of civilian personnel who are members of special rescue forces.

“First of all, send our hugs, our condolences, to all the relatives of those who lost their lives in these earthquakes (…) We have to move forward, preparing ourselves, education is essential to face these natural phenomena, (…) we already know that we have the solidarity of our people, which is like a blessing,” said AMLO.

As well as the secretaries of the National Defense Secretariat (Sedena), Luis Cresencio Sandoval and the Navy, Rafael Ojeda Durán; in addition to the commander of the National Guard, Luis Rodríguez; the national coordinator of Civil Protection, Laura Velázquez Alzúa; and the president of the Mexican Red Cross, Fernando Suinaga Cárdenas.

Flag raising in memory of victims of the 1985 and 2017 earthquakes, from Mexico City https://t.co/K97rTQpSWa

Today is a day to remember the victims and honor the heroes of the #earthquake from 1985 and 2017.#19S 🇲🇽 🙏🏻 pic.twitter.com/sluuxJcy9E

5 years ago I took this picture, a few minutes after @angelosalais rescued me from the rubble of my house. The #19S it is and will be in my memory solidarity, kindness, more than terror and trauma. Thanks to the rescuers, who gave us a new life. Thank you always. pic.twitter.com/bCfGaQXLLV

From the earthquake of September 19, 1985 I keep this photograph that my father kept from an old special edition of a newspaper. The image of the waving flag has always appealed to me. #19S pic.twitter.com/kHAYpgZVdO

That today, the earth does not tremble in the center and only be the drill. 🙏🏼#19S pic.twitter.com/Ei5r1Up6Ls

#19S It is a date that hurts us all. On two occasions, nature whipped us in such a way that nobody saw if we were fifís or chairos who were helping.
Currently another earthquake disguised as a tyrant has us divided, organized civil society will unite us again.

Companies that continue to support after September 19