Bullfrag
Home Business Marketing This is how they react in networks after the premiere of the... 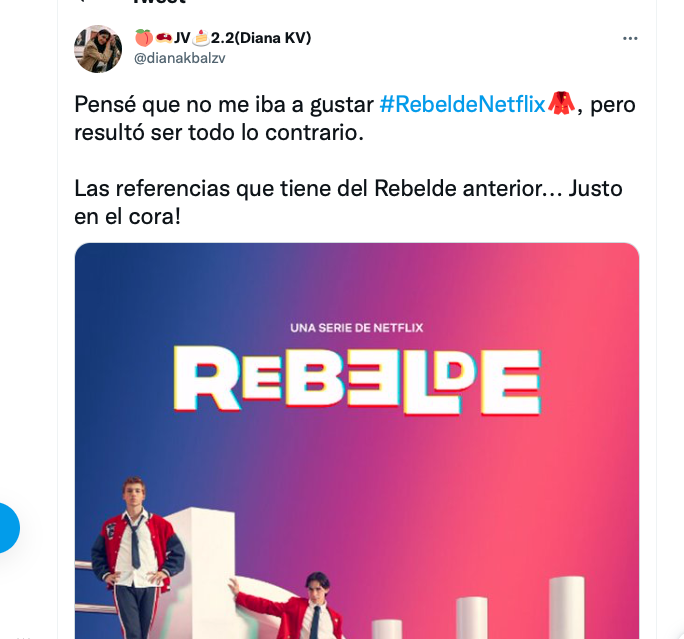 Rebelde one of the most watched Mexican soap operas in various parts of the world, arrived on January 5 with a remake made by Netflix.

The youth phenomenon of the 2004 generation, where the iconic leading characters of Mia Colucci, Miguel Arango, Roberta Pardo, Diego Bustamante, Giovani Mendez Lopez and Lupita Fernandez who popularized various songs such as “Save me” or “Just stay in silence”, was presented by the streaming platform as one of its big bets for this 2022 with which they also seek to catch the new generations.

Before the premiere on the platform, Rebelde fans did not wait to publish memes and react with what was episode 1: “Welcome Everyone.” Nostalgic comments also flooded social networks after the viewing of this first episode after recalling the Televisa soap opera, wearing the uniform with red jackets and phrases referring to the past characters, is what can be seen.

“Mia Colucci resting from carrying on her shoulders the weight of being the best and most named rebel character,” says one of the comments on Twitter.

Mia Colucci resting from carrying on her shoulders the weight of being the best and most named rebel character pic.twitter.com/XS7LHqoLpb

As well as “#RebeldeNetflix you can remove the series from televisa but never on televisa from the series.”

#RebeldeNetflix You can get the series from televisa but never on televisa from the series pic.twitter.com/vzOOeMwlgq

“My mood from this moment: #Rebelde #RebeldeNetflix”, reads another comment.

“I if in #RebeldeNetflix it occurs to them to say that Roberta and Diego are not together or anything like that …”, says another comment accompanied by a video where a girl comes out crying.

I do in #RebeldeNetflix It occurs to them to say that Roberta and Diego are not together or anything like that … pic.twitter.com/q1ccftwRlV

“I thought I wasn’t going to like #RebeldeNetflix, but it turned out to be the opposite. The references he has from the previous Rebelde… Right in the heart, ”says another tweeter.

I thought that I was not going to like it #RebeldeNetflix, but it turned out to be the opposite.

The references you have from the previous Rebel… Right in the heart! pic.twitter.com/tcjS1pInW6

But not all were positive comments about the Netflix production, Well, there were also many fans of the soap opera who criticized this remake.

“I’m sorry, but this will always be the best version of Save me … The feeling that no one can ever give you. #Rebelde ”, they comment on Twitter.

I put a chapter of #Rebel to give them the benefit of the doubt and as we supposed it is horrible. And the MJ… 🙄 pic.twitter.com/svdh5xQ853

“I put a chapter of #Rebelde to give them the benefit of the doubt and as we supposed it is horrible,” reads another comment on the social network.

Rebelde and RBD the winning formula of 2004

The telenovela Rebelde that emerged in the Televisa studios premiered in October 2004 And since its launch it was a success in Mexico and in several Latin American countries.

Created by producer Pedro Damián using the idea of ​​Cris Morena, creator of the Argentine version “Rebelde Way” maintains the idea of ​​a group of nonconformist teenagers who form a musical band against the rules of their strict school.

From the telenovela arises the musical group RBD that was made up of six members and protagonists of the telenovela: Anahí, Alfonso Herrera, Christian Chávez, Christopher Uckermann, Dulce María and Maite Perroni.

Let us remember that the group’s first album was titled “Rebelde” and it came out at the end of November 2004, where it rose in the rankings of Mexico and the United States, where it occupied the first position of the Billboard Latin Pop Albums.

The group released six studio albums, went on five international tours, before breaking up in 2009.

Influencer reveals one of the biggest secrets of the fashion industry

Windows 11 will get along better with our Airpods

WTCR is also working on a very short-term hybrid future

Scrolling in Edge will be smoother on FreeSync monitors